US Open: Indians advance without much fuss

Mahesh Bhupathi put behind his shock first-round exit from the men's doubles event by advancing to the mixed doubles second round, while Sania Mirza and her women's doubles partner Bethanie Mattek-Sands also cleared the first hurdle in the US Open in New York.

Bhupathi along with his new partner, Andrea Hlavackova of Czech Republic, beat the American combination of Mitchell Krueger and Samantha Crawford 6-2, 6-4 in just 57 minutes on Thursday. 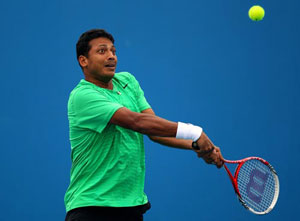 Bhupathi and Hlavackova won a total of 58 points as compared to the 41 won by the Americans.

They will next take on the winners of the match between the American duo of Nicole Melichar and Brian Battistone and Spanish pair of Nuria Llagostera Vives and David Marrero.

They took less than an hour to topple the unseeded Romanian-Italian pair.

Sania-Bethanie got as many as 16 breakpoints, of which they could convert only five but that was enough for them to run away with the match comfortably.

They will now face Katalin Marosi of Hungary and Croatia's Darija Jurak in the second round.