Everton's match at home to Birmingham City and Blackpool's game against Liverpool were postponed on Sunday as Premier League fixtures once again fell victim to freezing conditions in Britain.

"There are several miles of frozen pipes, many of which burst during the course of Christmas Day night," Everton said on their website.

"Our stadium and safety teams worked round the clock but due to the rapidly deteriorating conditions -- and in the interests of safety and hygiene we have reluctantly taken the decision to postpone the game."

Promoted Blackpool, who do not have undersoil heating at their Bloomfield Road ground, were forced to postpone their third successive home match due to a frozen pitch.

The seasiders, who face a cluttered schedule of rearranged games, said on their website the match had been rescheduled for January 12.
Source:

© Copyright 2022 Reuters Limited. All rights reserved. Republication or redistribution of Reuters content, including by framing or similar means, is expressly prohibited without the prior written consent of Reuters. Reuters shall not be liable for any errors or delays in the content, or for any actions taken in reliance thereon.
Related News: Blackpool, Everton, EPL, Birmingham City, Liverpool
COMMENT
Print this article
EPL: Chelsea v Man U called off as England freeze
Former Liverpool defender Cohen injured in crash 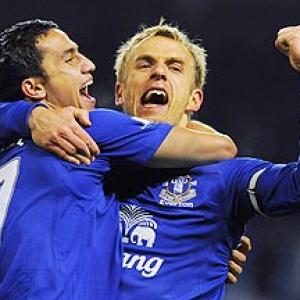