Britain's Bradley Wiggins masterfully fended off the challenges of his rivals to retain the Tour de France yellow jersey into the Alps on Wednesday.

The 194.5km 10th stage from Macon to Bellegarde sur Valserine went to France's Thomas Voeckler, part of a breakaway which stayed in front on the three climbs of the day, including the gruelling Colombier pass 43km from the finish.

But the first out-of-category climb in this edition did not make any difference to the overall standings.

Belgium's Jurgen van den Broeck attacked three times on the way up but was easily reeled in each time by Wiggins's Sky team mates.

As expected, Italy's Vincenzo Nibali tried his luck in the descent, taking a minute off the Wiggins group on the way down before being caught in turn with 21km to go.

As a result, the Briton retained his lead of one minute 53 seconds over holder Cadel Evans of Australia while Wiggins' team mate and compatriot Chris Froome remained third, 2:07 adrift.

Nibali remained in fourth place, 2:23 off the pace.

Voeckler deserved the third Tour stage win of his career, leading the way for most of the day before outwitting Italy's Michele Scarponi and Germany's Jens Voigt in the final stretch.

The Frenchman, fourth overall last year, was also first at the top of the Colombier and seized the King of the Mountains polka-dot jersey.

© Copyright 2021 Reuters Limited. All rights reserved. Republication or redistribution of Reuters content, including by framing or similar means, is expressly prohibited without the prior written consent of Reuters. Reuters shall not be liable for any errors or delays in the content, or for any actions taken in reliance thereon.
Related News: Bradley Wiggins, Thomas Voeckler, Michele Scarponi, Jurgen van den Broeck, Vincenzo Nibali
SHARE THIS STORYCOMMENT
Print this article 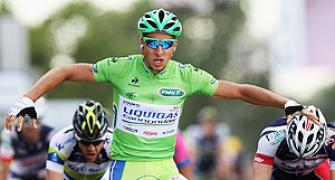 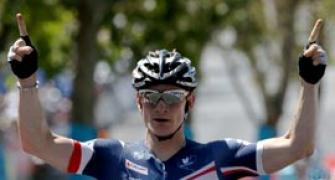 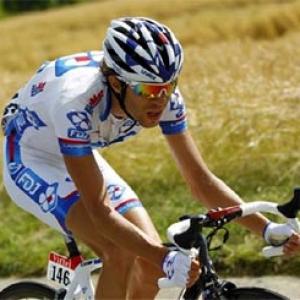