News
Business
Movies
Sports
Cricket
Get Ahead
Money Tips
Shopping
Sign in  |  Create a Rediffmail account
Rediff.com  » Sports » All of Beijing is an Olympics venue

All of Beijing is an Olympics venue 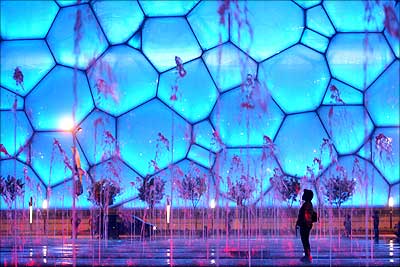 In this bestirred capital city, the Olympics began long ago. The official approach to it has also brought out one commonality between China and India -- faith in numerology and vaastu, in what is auspicious and what is not.

The most auspicious of all numbers in the Chinese tradition is 8. Therefore the opening ceremony will start precisely at 8 seconds past 8.08 pm on the 8th day of the 8th month of 2008.

Actually the manner and scale in which the Olympics is being organised say a great deal about the national character of the Chinese people -- their pride in China, their vision for the future, their planning genius, their organising capabilities, their aesthetic excellence, above all, their intense desire to be liked and appreciated by the rest of the world.

All nations hosting the Olympics use it as an occasion to display national glory. China has followed the tradition by putting up some futuristic buildings as the main venues for the Games. The central stadium is already a topic of discussion around the world as the Bird's Nest.The swimming events will be held in a structure that looks like it is made of water.

For the Chinese, though, all of Beijing is an Olympics venue. That is the kind of attention they have paid to every nook and corner of the place and to every nearby attraction, from the Ming Tombs to the Great Wall. And they did it with a speed that is astonishing.

I stayed in a hotel close to the Bird's Nest. A large area next door was being levelled by JCBs, apparently for landscaping. One morning when I left the hotel, a JCB was digging some holes. In the evening when I returned, the whole area had become a beautifully laid-out garden with fully grown trees and large flowerbeds. The flowers, big hydrangias and azalias and petunias in bright reds, yellows and violets, were swinging in the wind.

All over Beijing instant forests and gardens have come up. Big trees, their trunks wrapped in gunny bags or tightly wound ropes, are transplanted from faraway places. Roadside landscaping and medians are living works of art, miles of roses and chrysanthemums beckoning you as you drive past. They don't call Beijing a Garden City. But it is.

The greening of Beijing is part of the environmental policy adopted as part of the Olympics commitment. In all 28 million trees have been planted in the city. All Olympics buildings are lighted by solar power. All factories in the city centre have been closed and inhabitants of three lakh old houses rehabilitated outside the city. There were no protests as there was in Delhi when the courts ordered closure of some old factories in the inner city. Communism has its uses, especially when it is purposeful communism accepted by the people as such.

China diary: Paris of the Orient

Beijing's notorious pollution is said to be already under control. They have announced plans to allow only one-third of the city's registered vehicles to be out on the road on any given day. From July 20 the massive construction industry stopped, not just in Beijing, but in nearby areas as well, to ensure good air quality for the athletes.

The cigarette industry is also dislocated. Smoking is a national habit in China. Paramount leaders like Mao Zedong and Deng Xiaoping were chain smokers. The supreme sacrifice of curbing smoking is already under way. Even in the restricted rooms where smoking is permitted, they have fitted nano air filters have to break cigarette smoke down to harmless particles before it is released into the atmosphere.

They have another national habit -- spitting. The traditional belief is that phlegm is evil and must never be retained in the body. Singapore ended the habit by imposing heavy punishment on offenders. China is currently trying persuasion. What is called the Capital Ethics Development Office has distributed to local people two million booklets on how to behave in public places. It is all about smiling, queueing, not littering and of course not spitting.

Perhaps no people who hosted Olympics in the past were as eager for the Games to succeed as the Chinese now are. More than with any other people, it is for them an issue of national pride. They want the Games to proceed without a hitch. And they want the visitors to go back with happy memories. They want the athletes in particular to remember the Beijing Olympics as something special.

The medals this year will be more precious than any that were presented in previous games. The gold medals for example will have gold only on one side. On the other side will be white jade, the finest and costliest of China's most precious gem. A usual Olympics gold medal costs around $200 (about Rs 8,400). This year's gold-and-jade medal will cost $800 (about Rs 33,600). To the world's greatest sports stars that will be a permanent reminder of China.

Nearly two million visitors are expected to visit Beijing for the Olympics. If you are planning to be one of them, think again. A city tour that cost 500 yuan (1 yuan = Rs 6) now costs 1,000 yuan. Hotel rooms will be three and four times more expensive. Tickets for the opening ceremony have hit record levels in the black market. One taxi driver in Beijing told me that the going rate was $20,000 (about Rs 840,000) for a ticket. That is almost nine lakh rupees.

No Olympics is worth that.

Image: Beijing's National Aquatics Centre, also known as the Water Cube, where the swimming events will be held and which looks like it is made of water. Photograph: Feng Li/Getty Images

Now a Bangalore resident, T J S George lived as a journalist in Hongkong through the 1960s and 1970s. 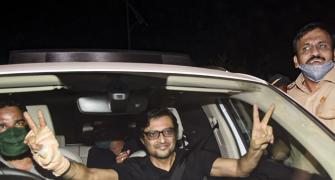 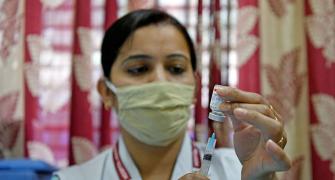 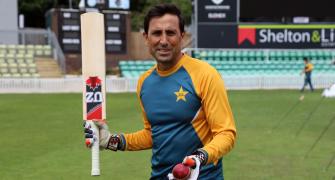 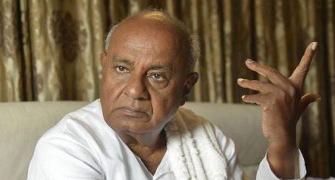