Title holders Bayern Munich eased into the second round of the German Cup with a comfortable 4-0 win over amateurs Germania Windeck on Monday, with striker Miroslav Klose scoring once and setting up another goal.

They were joined by Schalke 04, who struggled to beat third division club VfR Aalen 2-1, with Peruvian striker Jefferson Farfan scoring once either side of halftime.

Bayern, without injured winger Arjen Robben, fielded a strong side that included Klose and French playmaker Franck Ribery, as they gear up for the start of their Bundesliga title defence on the weekend.

In front of 40,000 fans in the Cologne arena to meet the demand from Windeck fans for this match as their own stadium has a capacity of just 2,000, Bayern scored two goals at the end of each half to advance.

Klose, who looks to have reclaimed a starting spot in the team after his successful World Cup campaign where he scored four times, netted a minute before the break when Diego Contento sailed a cross into the box and the striker slotted home.

A minute later Bayern doubled their lead when Klose, fed by Philipp Lahm, laid the ball off for Ribery to score.

With the hosts gradually running out of steam, Toni Kroos added another with a shot from the edge of the box in the 84th minute before striker Mario Gomez, who earlier missed two clear chances, turned inside the box and scored their fourth only a minute later.

Schalke, without new signing Raul, were made to work hard against Aalen, despite the hosts being down to 10 men from the 18th minute after Andreas Schoen was sent off for a foul on Farfan.

The Peruvian then proceeded to volley Schalke into the lead three minutes before the break and added another with a fine header that wrong-footed Aalen keeper Daniel Bernhardt a minute after the restart.

But instead of finishing off their tired opponents, Schalke conceded a late penalty for a clumsy challenge by new signing Christoph Metzelder on Elia Soriano.

Tim Bauer sent keeper Manuel Neuer the wrong way to trigger a frantic final eight minutes but Schalke hung on for an unconvincing win, four days before the Bundesliga starts.

"You could see today that our attack, without Raul, would not be strong enough to compete in the Bundesliga," Schalke coach Felix Magath said.

"In general we still need also to get some reinforcements," he said, adding Schalke were interested in VfL Wolfsburg playmaker Zvjezdan Misimovic but had yet to make a move for the player.

Following Monday's results, all Bundesliga clubs, apart from St Pauli and Hanover 96, have advanced into the second round.

© Copyright 2020 Reuters Limited. All rights reserved. Republication or redistribution of Reuters content, including by framing or similar means, is expressly prohibited without the prior written consent of Reuters. Reuters shall not be liable for any errors or delays in the content, or for any actions taken in reliance thereon.
Related News: Schalke, Bayern Munich, Miroslav Klose, Aalen, Raul
SHARE THIS STORYCOMMENT
Print this article 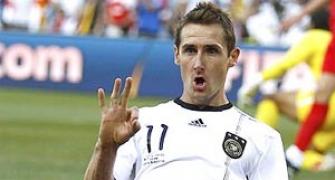 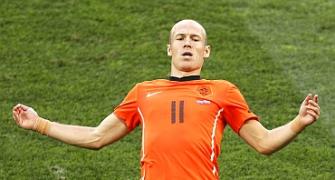 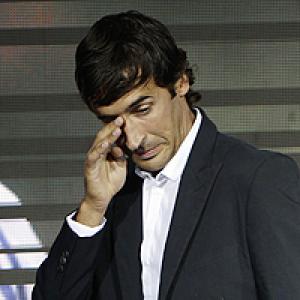