News
Business
Movies
Sports
Cricket
Get Ahead
Money Tips
Shopping
Sign in  |  Create a Rediffmail account
Rediff.com  » Sports » The Real truth behind De Gea not making it to Madrid 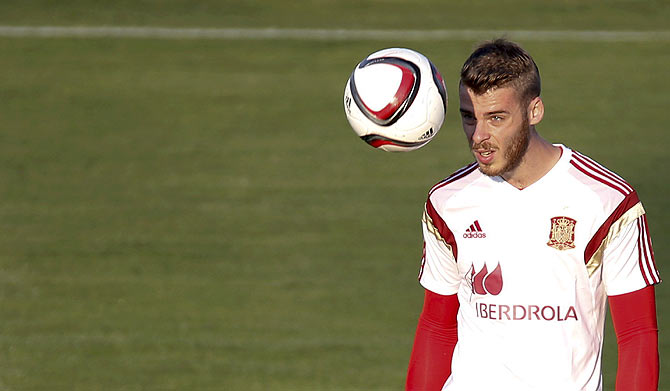 The deal, which included Real's Costa Rica ’keeper Keylor Navas moving to United, broke down in surreal circumstances when the completed paperwork was not filed with the Spanish league (La Liga) until just after the midnight deadline.

Real and United blamed each other for the snafu and Perez added more fuel to the fire late on Thursday when he suggested in an interview with Spanish radio broadcaster Cadena Ser the English club's negotiating team had not been up to the job.

The construction magnate noted that a similar situation had occurred last year when United wanted to buy Real's Portugal fullback Fabio Coentrao and also when they were tying up a deal to sign midfielder Ander Herrera from Athletic Bilbao.

"I don't want to blame anyone but we do not understand why so much time was needed to look at the contracts.

"I don't think they (United) had bad intentions. They would have had a lot of work to do."

De Gea, whose United contract expires at the end of the season, could find himself in limbo, at least until the end of the year when the market opens again.

While the transfer saga rumbled on, United coach Louis van Gaal left the 24-year-old former Atletico Madrid keeper out of the squad, with Argentina's Sergio Romero playing instead.

Perez said it was too early to say whether De Gea might still join Real, where he is seen as a long-term replacement for former captain Iker Casillas, who joined Porto in July.

© Copyright 2020 Reuters Limited. All rights reserved. Republication or redistribution of Reuters content, including by framing or similar means, is expressly prohibited without the prior written consent of Reuters. Reuters shall not be liable for any errors or delays in the content, or for any actions taken in reliance thereon.
Related News: David de Gea, Manchester United, Florentino Perez, Real Madrid, Louis van Gaal
SHARE THIS STORYCOMMENT
Print this article