The Queen will use her traditional Christmas Day message, filmed in 3D for the first time, to pay tribute to the world's athletes for delivering a "splendid summer of sport" at the London Olympics.

In her personal address to the nation, the monarch will pay tribute to the competitors' "skill, dedication, training and teamwork", her office said on Monday.

The 86-year-old head of state provided an Olympic highlight when she made a surprise comic turn with James Bond actor Daniel Craig in a short film for the opening ceremony. "In pursuing their own sporting goals, they gave the rest of us the opportunity to share something of the excitement and drama," she will say, according to advance extracts.

The Queen missed a church service at her country retreat on Sunday due to a cold, Buckingham Palace said. Her message was pre-recorded and will go out as expected.

It comes at the end of a landmark year for the royal family.

The Queen marked 60 years on the throne with the Diamond Jubilee celebrations and her grandson Prince William and his wife Kate are expecting their first baby.

Prime Minister David Cameron issued his own Christmas message in which he talked of Britain's "extraordinary year".

"We cheered our queen to the rafters with the Jubilee, showed the world what we're made of by staging the most spectacular Olympic and Paralympic Games ever and - let's not forget - punched way above our weight in the medals table," he said.

The first Christmas broadcast was given by Queen Elizabeth's grandfather George V in 1932. It has become a Christmas Day tradition for many families to watch it together after lunch.

Photo: Britain's Queen Elizabeth (left) watches a preview of her Christmas message with a pair of 3D glasses, studded with Swarovski crystals in the form of a "Q", with producer John McAndrew and director John Bennett (R), at Buckingham Palace in central London in a photo released December 24, 2012. The Christmas message to the Commonwealth is to be broadcast in 3D for the first time. (REUTERS/John Stillwell/Pool)

© Copyright 2020 Reuters Limited. All rights reserved. Republication or redistribution of Reuters content, including by framing or similar means, is expressly prohibited without the prior written consent of Reuters. Reuters shall not be liable for any errors or delays in the content, or for any actions taken in reliance thereon.
Related News: Buckingham Palace, Queen Elizabeth, Diamond Jubilee, David Cameron, James Bond
SHARE THIS STORYCOMMENT
Print this article 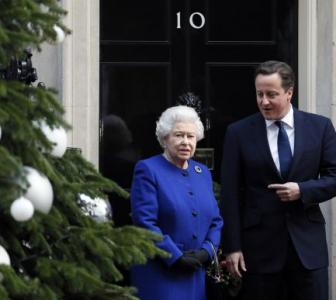