Indian striker SV Sunil was reprimanded but escaped a ban for showing his middle finger to spectators after scoring the match-winner against Pakistan in the ongoing Azlan Shah Cup hockey tournament.

Tournament Director Sarinder Dillon of Hong Kong issued an "official reprimand" after a disciplinary hearing at the team hotel where Sunil and Indian team manager Manoj Bhore were present.

Sunil's action of throwing a punch in the air with his middle finger raised in Thursday's encounter with Pakistan was caught by television cameras.

The matter then came to the attention of the Tournament Director, who summoned Sunil and the Indian team manager for a hearing after viewing the video of the incident.

"Sunil accepted that he was wrong and has been officially reprimanded," Dillon said.

The decision means Sunil will be able to play in India's last match on Sunday. Indian team manager Bhore said he was relieved that the matter had been resolved.

Sunil's match-winning goal for India came in the penultimate minute when the teams were tied 1-1.

India had opened the scoring in the first session through penalty corner specialist Sandeep Singh, while Pakistan equalised with a penalty corner conversion by Sohail Abbas, the highest all-time goal scorer in international hockey. 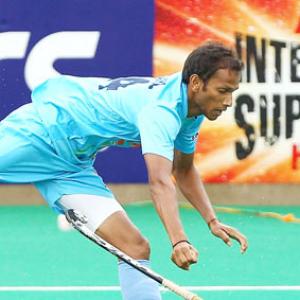