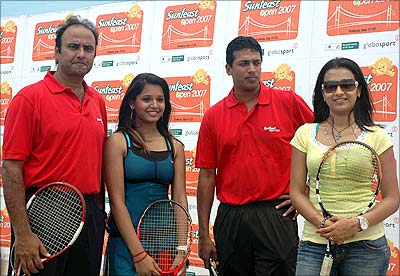 Indian women's tennis sensation Sania Mirza is having a great year and can break into the top 20 in the WTA rankings, doubles specialist Mahesh Bhupathi says.

Speaking on the sidelines of a promotional event for the Sunfeast Open 2007, to be held in Kolkata from September 17-23, he said, "She is having a great year. Clearly, she has left behind the blues. With a little bit of luck, she can crack the top 20."

On his partnership with Sania in the mixed doubles, he said, "Hopefully, we will play for a long time and hope to win couple of Grand Slams."

The two, pairing for the first time, lost in the second round at Wimbledon this year.

On setting up a Mahesh Bhupathi Tennis Academy on the lines of the ones in Bangalore and Gurgaon, he said he is looking at the possibility of opening one in Chennai in 2008.

Bhupathi also said there are a few players in the junior category who were "very good".

"But it will take them at least five to six years to mature," he added.

Asked if he will pair with Leander Paes for the Olympics, he replied: "That is for the federation to decide."