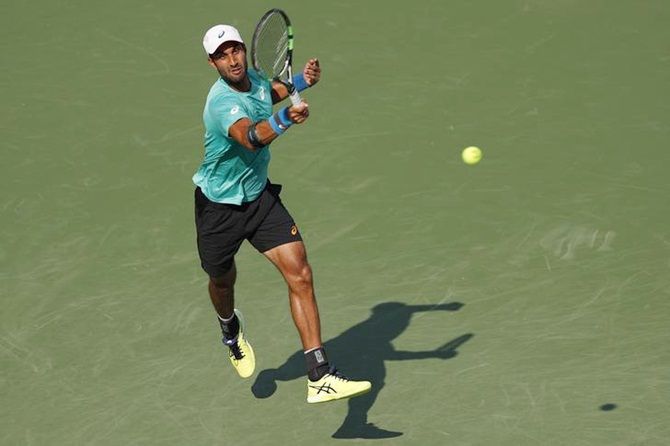 IMAGE: Yuki Bhambri had little to do in his opening singles match at the ATP Tashkent Open. Photograph: Geoff Burke-USA TODAY Sports

Yuki Bhambri advanced to the singles second round of the ATP Tashkent Open and reached the doubles quarter-finals, partnering compatriot Divij Sharan, following an upset victory over the top seeds on Tuesday.

Yuki was leading Aleksandr Nedovyesov 3-0 when the Kazakh opted out due to a right hip strain in the first round match at the US $150,000 Challenger event.

The 152nd-ranked Indian will take on Poland's Kamil Majchrzak, who dispatched Australia's Marc Polmans 6-4, 7-6(8) at the Olympic Tennis School.

In the doubles, Yuki and left-handed Divij Sharan knocked out the top-seeded Argentine pair of Guillermo Duran and Andres Molteni, winning 6-4, 6-2 in the first round.

They will take on Denys Molchanov of Ukraine and Romain Arneodo of Monaco.

However, disappointment was in store for the fourth seeded Indian pair of Jeevan Nedunchezhiyan and Vishnu Vardhan. They lost 6-7(6), 6-7(6) to Italy’s Thomas Fabbiano and Luca Margaroli of Switzerland.

Bopanna-Cuevas out of Shanghai Masters

Meanwhile, at the Shanghai Masters, Rohan Bopanna and Pablo Cuevas were ousted after losing in the opening round 6-3, 3-6, 5-10 to Nick Kyrgios and Lucas Pouille.

S Sathish Kumar and Kh Sanjita Chanu will be looking to repeat their gold medal-winning performances of the last Commonwealth Games during the 2018 event in Gold Coast in April.

In the last edition of the Games in Glasgow in 2014, Indians bagged as many as 12 medals, including three gold.

Apart from Sanjita and Sathish, Sukhen Dey (men's 56kg) also won the yellow metal but he has failed to qualify this time around.

In the 56kg category, India will be represented by Gururaja.

Sanjita, who won gold in the women's 48kg, has gone up a weight division and will be competing in 53kg, while Satish will defend his title in the men's 77kg.

In the men's category, Sathish and Vikas Thakur are the only lifters; both were also there in the squad in the last edition.

Thakur had bagged a silver medal in the 85kg category but this time he will take part in the 94kg.

As far as women are concerned, Sanjita, Saikhom Mirabai Chanu, Punam Yadav and Vandna Gupta are the known faces from the last edition.

Mirabai Chanu won a silver in the 48kg, Punam finished with a bronze in the 69kg, while Vandna was fourth.

Sandhu, who has the distinction of coaching both men and women boxers, was conferred the honour at a function in Delhi on Monday.

"I am thoroughly honoured to be considered worthy of Vayoshreshtha Samman -- a scheme of National Awards for senior citizens. I am grateful to the President of India for this," said Sandhu.

Sandhu is India's longest-serving men's national coach, occupying the position for two decades before he was handed charge of the women’s campers earlier this year.

That tenure, however, ended up being a short one and he was replaced by Shiv Singh last month.

Sandhu was the chief coach when India won its maiden Olympic medal in boxing through Vijender Singh in 2008. 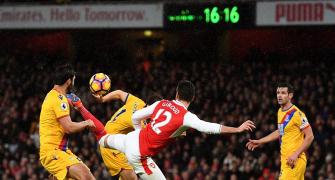 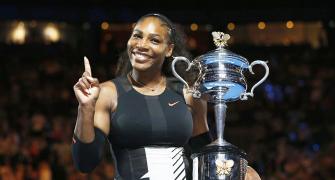 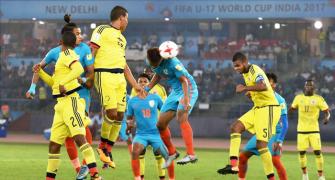 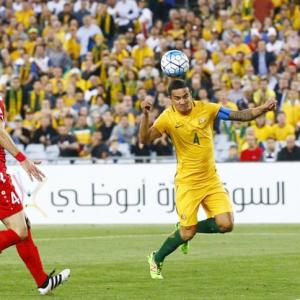 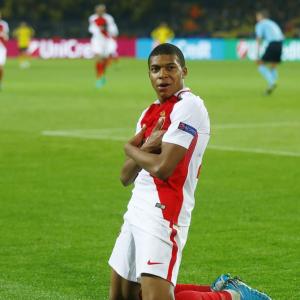