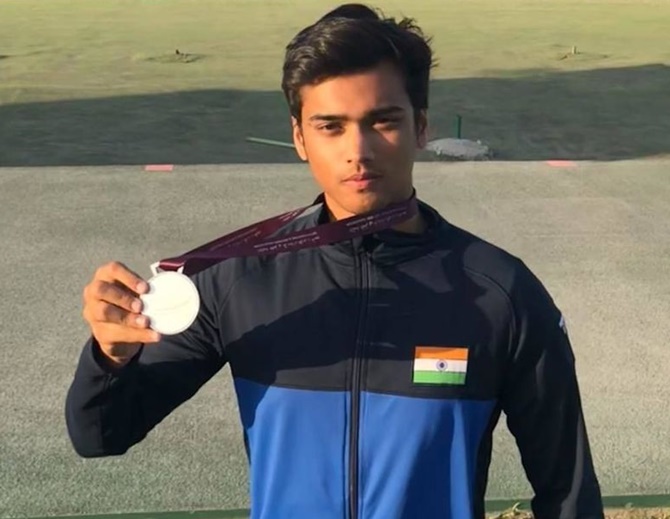 The promising Manavaditya Singh Rathore has won a silver medal in the Qatar Open Shotgun meet in Lusail, Qatar.

Participating in the junior men's trap event, Manavaditya shot 118 to finish second on the podium behind Italy's Angelo Scalzone, who shot 119.

Germany's Jeremy Schulz won the bronze medal with a score of 115.

Son of Sports Minister and Athens Olympics silver medallist Rajyavardhan Singh Rathore, the 19-year-old Manavaditya started with 23 in the first series of 25 shots and improved it to 24 in the next three series, but could manage only a 23 in the fifth and final series on Saturday.

The field had a total of 11 shooters, including James Dedman of Great Britain, who recently switched from double trap to trap shooting.

The visitors had taken the lead in the 32nd minute through a brilliant strike from Wellington Priori and kept the Chennaiyin side at bay with some superb defending.

The Jamshedpur team coached by Steve Coppell, as is their wont, held back after going ahead in the first half, which perhaps proved their undoing. Also, the players seemed to be tired in rather humid conditions towards the end of the match.

The equaliser came when Rafi headed home a cross from Rene Mihelic, leaving Jamshedpur custodian Subrata Paul stranded. It was Rafi's second goal of the season.

Towards the end of the game, Mihelic sent in a precise ball into the box but Henrique Sereno couldn't connect, much to the relief of the rival defence.

In the first half, Chennaiyin forwards couldn't get their way past the organised Jamshedpur defence even as the rivals put together some threatening moves.

Chennaiyin's Raphael Augusto got past Raju Yumnam and forayed into the box but saw but couldn't get any further.

The next chance of note came in the 16th minute when a backheel from Gavilan afforded shooting space for Raphael outside the area, but the Brazilian's shot did not trouble Paul.

The goal came in the 32nd minute when a long free-kick into the box was headed out by CFC's Inigo Calderon. However, the ball lobbed up towards Priori, whose powerful right-foot volley flew past a diving Karanjit Singh to leave the home supporters stunned.

In the 54th minute, Raphael Augusto had a great chance as Bikey's clearance went straight to him but he shot wide.

As the game wore on, Chennaiyin piled up the pressure and strung together some good moves before the goal came.

Chennaiyin stays in third spot in the standings with 28 points, two ahead of Jamshedpur, which breathing down its neck in fourth spot. Both teams have two matches to go as the race for the play-off berths gets tighter.

Chennaiyin plays Kerala Blasters in the next match, away on February 23 before rounding off the league phase with a game against Mumbai City FC at home.

Birthday boy Dipanda Dicka notched a brace and Akram Moghrabi netted the winner as Mohun Bagan came out 3-2 victors over Neroca FC to dash the home side's title hopes in the I-League in Imphal.

Felix Chidi and Singam Subhash Singh scored the goals for the home side but allowed the visitors to get back into the game at the Khuman Lampak Stadium.

Chidi was brought back into the line-up in place of Nedo Turkovic as Neroca FC looked to win and stay on top of the table.

The hosts did not have to wait too long to break the deadlock. Subhash Singh robbed the ball of Kinshuk before chipping it over the custodian in the 16th minute to give his side a wonderful start.

The celebrations of the first goal were cut short four minutes later when Moghrabi released Dipanda into the box. The striker was brought down before he could get his shot away by Bishorjit and the referee wasted no time in pointing to the spot.

Dipanda stepped up to hit the net for the tenth time this season and levelled things for Mohun Bagan.

Just as the visitors thought they were back in the game, a failed overhead clearance by Kinshuk allowed Tondonba to find Chidi who did his best impression of a fox in the box by neatly slotting the ball past Shilton to make it 2-1 in the 24th minute.

A fantastic cross into the box from Moghrabi wasn't headed on target by Dipanda three minutes later but he was forgiven for his big miss in the 36th minute.

Neroca's defence was caught napping by Bagui's cross and this time, Dipanda made no mistake and for the second time in the game, Mohun Bagan were level. Bagan kept piling the pressure and were rewarded on the stroke of half time.

Nikhil Kadam's cross was flicked on across the face of goal by Kinowaki into the path of Akram Moghrabi. The striker nodded the ball in from close-range to make it 3-2.

Subash threatened twice after the restart. A dangerous cross by the forward forced a good save from Shilton Paul with Sushil lurking behind the goalie to head the incoming ball into the net in the 70th minute.

A minute later, Subhash Singh took the entire Bagan defence out of the equation with a delightful flick to release Chidi. Unfortunately for the striker, the ball was behind him as he had made the run early and hence could not get his shot away.

Neroca built attack after attack as the game progressed but Gift Raikhan's men weren't able to penetrate the Bagan defence, ending the game on the losing side and leaving the title race unpredictable.

Houston, who ranked only fifth among U.S. pole vaulters last year, cleared a lifetime best 5.83 metres to beat Kendricks, who failed three times at the height after not missing an attempt through 5.78 metres.

"Three weeks ago I had a great opportunity to go compete in Germany and compete against the best in the world – the last six world champions, indoors and out, the last two Olympic medalists, gold medalists, and I got beat really bad," he said.

"You can't take a loss and just tuck your tail down and run home so I came back and got off the plane and drove up to a meet the next day and competed.

"(I) set a new indoor personal best, and kind of started this path on to the indoor national meet."

World outdoor championships silver medallist Coleman cruised through qualifying in the 60 metres in 6.46 seconds despite slowing as he advanced to Sunday's semi-finals and finals.

The top two finishers in each event qualify for the March 1-4 world indoor championships in Birmingham, England, provided they have the qualifying standard.

Coleman's time was just 0.01 seconds faster than Ronnie Baker, who won the heat prior to Coleman's.

"I put out a good race. Now I've got two rounds to fill it out," said the confident Coleman, who hopes to use the rarefied air at high-altitude in Albuquerque to eclipse Maurice Greene's 20-year world record of 6.39 seconds.

Coleman ran 6.37 seconds last month in South Carolina, but the performance will not be ratified because electronic starting blocks were not in use.

America's hurdlers also are expected to be major factors at the world championships with Christina Manning clocking 7.84 seconds in 60 metres hurdles qualifying. 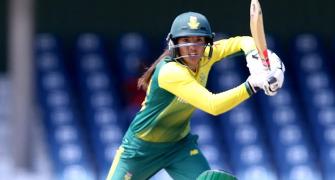 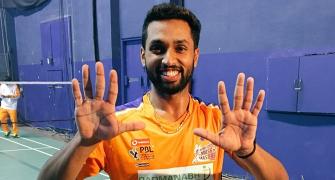 How Saina and Sindhu helped Prannoy... 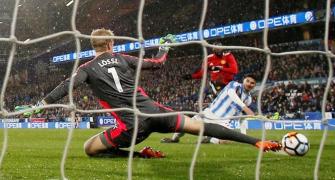 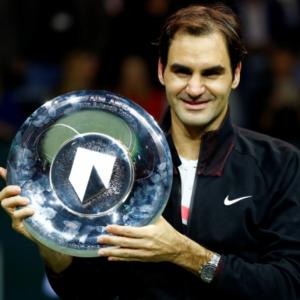 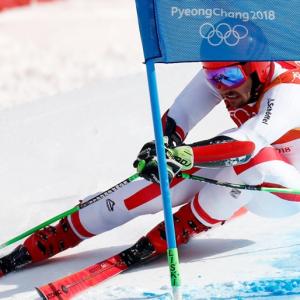