India disappointed yet again at the Olympics. The contingent from the world's second most populous nation returned home with a solitary silver medal and was shamed by two doping expulsions.

But amidst the gloom there were a few bright spots. The performances of the shooters -- Rajyavardhan Singh Rathore, Abhinav Bindra and Suma Shirur -- showed that they have the ability to match the best in the world.

In archery, the men's and women's teams showed that with a little exposure they could be world beaters.

Then, no one can forget Leander Paes and Mahesh Bhupathi's heroic effort of reaching the semi-finals in the men's tennis doubles. They still possess the magic, but will they be around come 2008 Beijing?

The Indian authorities should now have a fair and clear idea about the events that can actually yield a medal at the next Games and elevate India to the league Thailand, South Korea, Japan and China are in.

Time we realise that the Olympics are not just about competing, but winning as well.

India sent a 75-member team to the Games. A summary of each athlete's performance:

World number four Sushil Kumar lost to Cuba's Pan-American champion Yandro Miguel Quintana 0-3 and was eliminated from the medal hunt in the first round.

Sujit Mann, ranked eighth in the world, lost both his bouts and bowed out of the competition. The 25-year-old lost to Japan's Kuhiniko Obata 0-8 in his first bout before going down against Cuba's Ivan Fundora 0-6.

Other freestyle wrestlers, Yoheshwar Dutt (55kg), Ramesh Kumar (66kg), Anuj Kumar (84kg) and Palwinder Singh Cheema (120kg) bowed out of the competition without making an impression, while Greco-Roman wrestler Mukesh Khatri (55kg) also did not go beyond the first round. 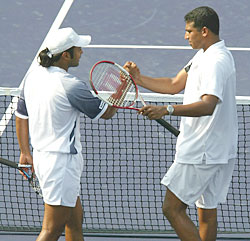 Malav Shroff and Sumeet Patel finished last in a field of 19 in the 49er Double-handed Dinghy Open Olympic Regatta.

Suma Shirur finished eighth among eight competitors in the final of the women's 10 metre Air Rifle at the Markopoulo Olympic Shooting Centre with a total of 497.2.

Ace shooter Anjali Bhagwat did not even qualify for the final, scoring a poor 393 out of a possible 400.

Abhinav Bindra disappointed in the final of the 10m Air Rifle to finish in seventh place. Bindra, who raised hopes by qualifying for the final in third place with a score of 597, could not handle the pressure and shot poorly in the final.

Rajyavardhan Singh Rathore provided the silver lining to India's dismal showing at the Olympics when he finished second in the final of the men's double-trap.

Anjali, who finished a poor 20th in her pet event  the 10m Air Rifle -- after being touted as a bright medal hope, put up another below par performance to finish joint 13th with a tally of 575 points in a field of 32 in the women's 50 metre rifle three-positions target.

The second Indian in the fray, Deepali Deshpande, was 19th with 572 points.

Akram Shah lost tamely, in only 44 seconds, to Khashbaatar Tsagaanbaatar of Mongolia in the second round of the 60 kg Group B category after getting a bye in the first.

Commonwealth champion Achanta Sharath Kamal lost in the second round of the men's singles to 25th-ranked Lai Chak Ko of Hong Kong.

N Kunjarani finished fourth in the 48kg class in the women's competition.

Sanamacha Chanu could lift of only 190 kg in the 53 kg women's competition.

Pratima Kumari was controversially taken off the starting list. It was later learnt that she had tested positive for testosterone and her team mate Chanu's sample showed traces of a diuretic, which can be used to mask the use of other banned substances.

Jitender Kumar suffered a deep gash above his left eye, which forced the referee to stop his 81 kg first round bout against Ukraine's Andriy Fedchuck.

Akhil Kumar lost to Jerome Thomas in the first round in the flyweight category.

Diwakar Prasad was outpointed by Nestor Bolum in the second round (last 16) in the bantamweight category. In the first round (round of 32) he beat Morocco's Hamid Ait Bighrade.

Reena Kumari lost in the pre-quarters in the individual competition while Sumangala Sharma lost in the second round.

The men's team (Majhi Sawaiyan, Satyadev Prasad and Tarundeep Rai) lost to Australia in the pre-quarter-finals.

Satyadev Prasad's performance was truly outstanding. He stretched the current world record, Im dong Hyun, to the limit before losing by one point in the pre-quarters.

Shikha Tandon finished sixth in the 50 metre freestyle heat, with a time of 28.31 seconds, 1.81 seconds slower than her personal best of 26.5 seconds that had secured her the Athens berth.

She placed seventh in her 100m freestyle heat, clocking 59.70 seconds.

Aparna Popat was beaten in the round of 16 in the women's singles by Mia Audina, who had won the silver medal at the Atlanta Games while representing Indonesia. Popat lost 9-11, 11-1, 11-3.

In the first round Popat beat Michelle Edwards of South Africa 11-6, 11-3. 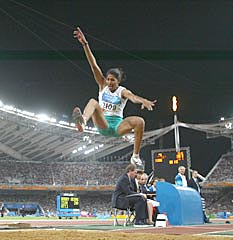 Anju Bobby George finished a creditable sixth in the women's long jump. She cleared 6.83 metres -- a personal best -- and set a new national record in the process.

The quartet of K M Beenamol, Manjeet Kaur, Rajwinder Kaur and Chitra K Soman clocked 3 minutes 26.89 seconds to qualify to the final of the 4 x 400m relay. India's time, however, was the slowest of all the qualifiers. They finished seventh in the final.

National record holder Bobby Aloysius crashed out in the preliminary round of the women's high jump, failing to go over 1.89 metres.

Sprinter Saraswati Saha bowed out of the women's 200 metres after a below-par performance. The 25-year-old Kolkata-based athlete finished a poor fifth in a sub-par time of 23.43 seconds in the first round heat.

K M Binu got off to a bad start and finished a distant seventh in his men's 400 metres semi-finals. He had set a national record of 45.48 seconds in the first round while making it to the semi-finals. The previous national mark stood in the name of Paramjit Singh since 2000.

Veteran Neelam J Singh had a best throw of 60.26m in her maiden attempt to obtain the ninth place in her heat and 18th in the overall rankings.

In men's discuss, Vikas Gowda finished 15th while Anil Kumar fouled in all his three attempts.

Bahadur Singh fouled in all his attempts in the men's shot put.

J J Shobha displayed admirable grit as she battled a ligament injury to finish the gruelling women's heptathlon in 11th place. She carried on despite pain in her left knee to aggregate 6172 points. Compatriot Soma Biswas logged 5965 points and finished 24th.

Infighting, lack of strategy and failure to come to terms with the demands of modern hockey marred India's campaign. New coach Gerard Rach promised to turn things around after India finished seventh among 12 nations.