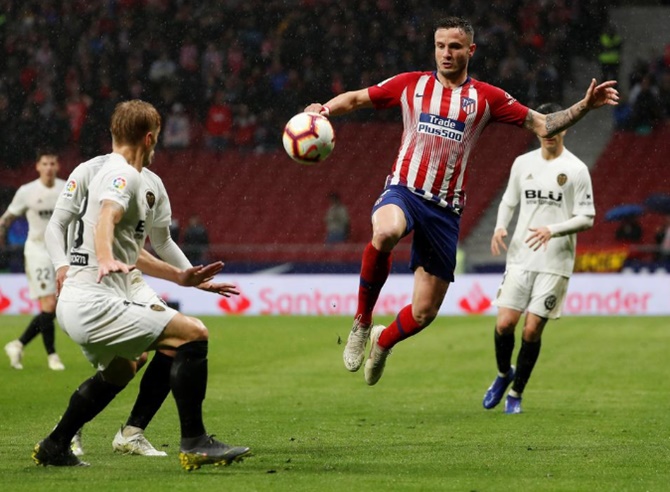 Defeat for Atletico would have seen Barca clinch an eighth title in 11 years, but the victory moved Diego Simeone's side on to 71 points after 34 games, nine points behind the Catalans.

Barca will be champions if they beat Levante at home on Saturday and could seal the title before kickoff if Atletico lose at home to Real Valladolid earlier in the day.

Alvaro Morata put Atletico ahead on a rain-swept evening in the ninth minute by knocking a cross in from close range on the volley but Valencia equalised in the 36th through former Atletico forward Kevin Gameiro.

Atletico's top scorer Antoine Griezmann put the home side back in front early in the second half with a header but the visitors, who are chasing fourth spot in La Liga, were awarded a penalty for a handball by Saul Niguez following a VAR review.

Captain Dani Parejo slammed the ball home from the spot but Atletico came back again to take the lead for the third time with a brilliant strike from Angel Correa, who sent the ball sweeping just inside the near post from outside the area.

Juventus to ditch stripes after 116 years? 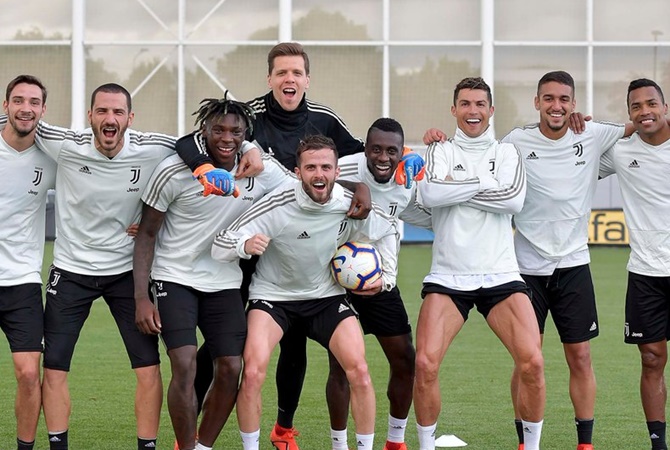 First it was the club emblem, where the distinctive bull was removed to make way for a minimalist white letter J on a black background.

Two years later, Juventus may be preparing to make an even bigger break with tradition and ditch their famous black-and-white striped shirts after 116 years.

Gazzetta dello Sport as well as a number of social media feeds on Wednesday published what they said were leaked photographs of the 2019/20 "home" strip. In a dramatic departure, the shirt featured one black half and one white half, divided by a thin pink line.

Juventus would not confirm the kit change. "We never comment leaks or rumours," a spokesman told Reuters. But the pictures, which included the shirt being worn by first-team players Paulo Dybala and Federico Bernardeschi, quickly stirred up controversy.

The English language blog "Black and White and Read All Over" said that the change "pretty much means Juventus will be ditching their history for a year in the hopes of making more of a fashion statement more than anything else."

Founded by students in 1897, Juventus initially played in pink but that colour quickly fell out of favour, especially as they did not want to be confused with Palermo -- who wear pink until this day.

One of the Juventus players, Englishman John Savage, had connections to Notts County and in 1903 asked if they could send a replacement. The English club agreed and ever since, Juventus have been playing in their familiar zebra stripes.

Although the release of new kits is seen as a key part of modern football marketing, it is rare for teams to do more than tinker around the edges of the so-called "home kit".

One notable exception was Brazil. Their combination of gold shirts and blue shorts is one of the most iconic kits in football but they only adopted it in 1953.

Previously, they played in white which became seen as unpatriotic due to the lack of national colours.

Following their failure to win the 1950 World Cup on home soil, the Correio da Manha newspaper ran a competition to design a new kit, won by 19-year-old Aldyr Garcia Schlee. Brazil have worn his Canarinho (Canary kit) ever since.

Liverpool used to play in red shirts, white shorts and white socks only adopted their all-red kit in 1964 when the then manager Bill Shankly thought it would have a psychological impact on opponents.

Coincidence or not, both Brazil and Liverpool went on to enjoy years of success after their kit changes.

However, playing with tradition is not something to be taken lightly. When the Red Bull energy drinks manufacturer took over at Austrian club Salzburg in 2005, they changed to the traditional purple kit to their corporate colours of white and red.

When fans pleaded for them to rethink, the club made one concession: the goalkeeper's away kit would feature purple socks. Fans were so annoyed that they formed a breakaway club. 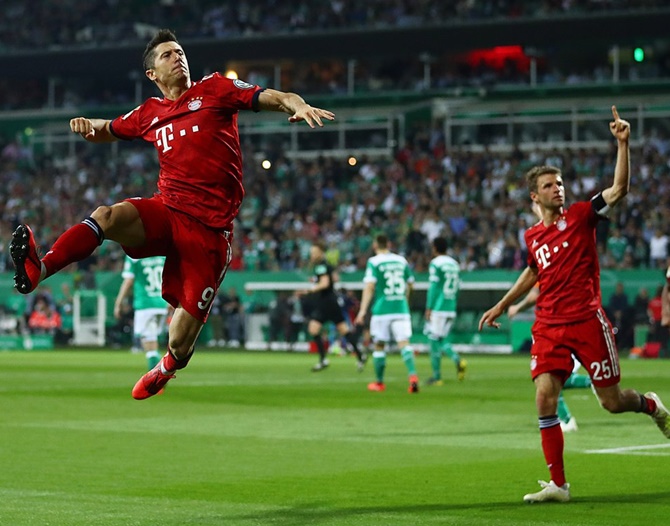 Bundesliga leaders Bayern Munich beat Werder Bremen 3-2 with two goals from Robert Lewandowski on Wednesday to advance to the German Cup final for the second straight year and keep the domestic league and cup double firmly in their sights.

The Bavarians, who also beat Werder in the league last week, will now face RB Leipzig in the final on May 25. Bayern had lost last year's final to Eintracht Frankfurt.

Werder scored twice in two minutes to come back from two goals down to level at 2-2 before Lewandowski hit an 80th minute penalty to secure victory for Bayern, who are chasing a record-extending 19th cup victory.

"We knew it would be tough. We had the penalty but we also had the chances. We deserved to go through," said Bayern's Niko Kovac, who can become the first coach to win the German Cup in consecutive years with different teams.

"We were caught napping in those two minutes and suddenly Bremen are level," said Kovac, who won the Cup with Frankfurt last year. "The penalty may have been a bit lucky but overall we fully deserved the win."

Bayern opened their account with the Bundesliga's leading scorer --Lewandowski -- who stabbed in from close range after a looping header from Thomas Mueller had bounced off the post in the 36th minute.

The hosts had their share of chances but it was Bayern who scored again with Mueller in the 63rd.

Werder, however, fought back through Yuya Osako in the 74th minute and Milot Rashica in the 75th.

Lewandowski, however, silenced the home crowd with his spot kick, which was awarded for a foul on Kingsley Coman by Theodor Gebre Selassie that left the Bremen players furious with the decision.

The Poland forward should have had a hat-trick but he hit the post from a metre out in stoppage time.

Lazio reached the Coppa Italia final and ended AC Milan's hopes of snapping an eight-year trophy drought when a breakaway goal from Joaquin Correa gave them a 1-0 win at a restless San Siro in the second leg of their semi-final on Wednesday.

The Argentine struck the only goal of a tense 180 minutes to earn Lazio a place in the final for the third time in five years and heap more pressure on Milan coach Gennaro Gattuso.

Milan's last silverware was the Serie A title in 2011 and they are now under more pressure than ever to finish in the top four of the league and qualify for the Champions League next season.

"We've beaten Milan and Inter in this stadium and it's fair that we are in the final," said Lazio coach Filippo Inzaghi, whose side knocked out Inter on penalties in the quarter-finals and will face either Atalanta or Fiorentina.

Lazio midfielder Sergej Milinkovic-Savic, sent off in the first half of the 2-1 home defeat by bottom club Chievo in Serie A on Saturday, this time limped off with an ankle injury in the 15th minute but his team kept going.

Lazio goalkeeper Thomas Strakosha did well to turn away Davide Calabria's low drive just before the half hour, one of only two Milan shots on target compared to 10 for Lazio.

Bastos fired wide for Lazio at the end of the first half and Milan goalkeeper Pepe Reina had to be quick off his line to block Correa's solo run.

Lazio came out stronger after the break and, after several warnings, they went ahead.

A quick break out of defence found Ciro Immobile, he stormed forward from the halfway line and fed the ball to Correa who slipped his shot between goalkeeper Reina's legs in the 58th minute.

Milan rarely looked like recovering although Patrick Cutrone had a goal disallowed for offside.

"Reina was outstanding, we deserved to be ahead by halftime and Strakosha was barely troubled during the match," added Inzaghi. "We left the disappointment of the Chievo result behind us and came here with great character."

© Copyright 2020 Reuters Limited. All rights reserved. Republication or redistribution of Reuters content, including by framing or similar means, is expressly prohibited without the prior written consent of Reuters. Reuters shall not be liable for any errors or delays in the content, or for any actions taken in reliance thereon.
Related News: Bayern, AC Milan, Atletico Madrid, Lazio, Juventus
SHARE THIS STORYCOMMENT
Print this article 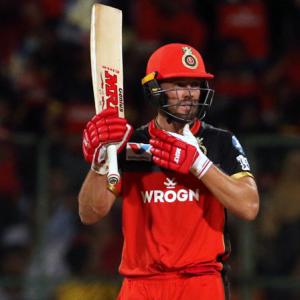