It is like a huge stone is off my chest, says Narang 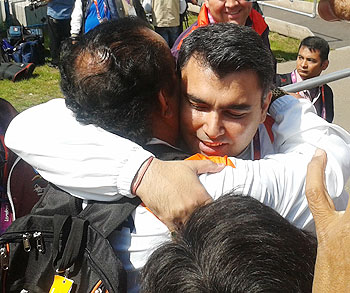 Shooter Gagan Narang provided the spark to India's Olympic campaign by clinching the bronze medal in the men's 10 m air rifle event while compatriot Abhinav Bindra surprisingly failed to qualify for the finals at the Royal Artillery Barracks in London on Monday.

Giving the country its first medal in the current Olympics, 29-year-old Narang lived upto expectations to claim bronze, the third shooting medal in India's Olympic history, but his overall performance was below his personal best.

While Narang managed to be consistent enough to win a medal in his third Olympic appearance, Beijing Games gold medallist Bindra, who was also touted as a serious medal contender, finished a disappointing 16th in the qualification round.

But the day clearly belonged to Narang, who shot 598 in the qualification and held his nerve in the tense tie-breaker to claim the bronze medal in a virtual neck-and-neck contest.

Narang had a total score of 701.1.Alin George Moldoveanu of Romania bagged the coveted gold medal with a total of 702.1 while Italy's Niccolo Campriani took the silver with a score of 701.5.

'I am trying to stay focused for my two other events' 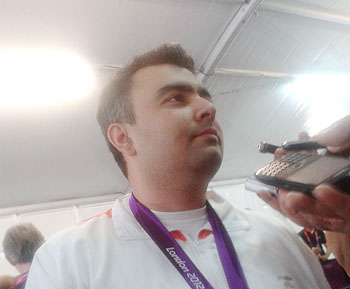 Image: Gagan Narang
Photographs: Harish Kotian/Rediff.com
Narang, who had taken part in the Athens and Beijing Games, and missed final berths by a whisker, was understandably relieved to have fulfilled his dream of winning an Olympic medal.

"It is like a huge stone is off my chest. I had not managed to qualify for the finals in the last two Olympics and that was really painful. But now I am happy to have finally won an Olympic medal," Narang said.

Narang, who won four gold medals in the 2010 Commonwealth Games in New Delhi, followed by two silver in the Guangzhou Asian Games a month later, said he was not really satisfied with his performance and should have returned with a better score.

"I am not really happy. My coach is also not happy with the score. Scoring 600 is always challenging, but I made a few technical mistakes at certain points. But, then, an Olympic medal is an Olympic medal," he said.

Asked whether the celebrations back home would serve as a distraction for him in the two other events, he replied: "I don't know what is happening back home. I am trying to stay focused for my two other events."
Tags: Narang , New Delhi , Beijing , Athens 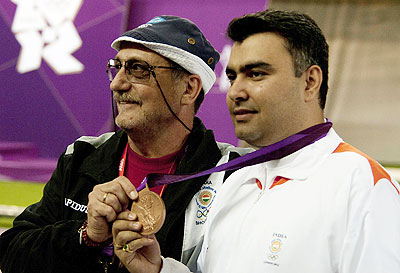 Image: Gagan Narang with his coach
Photographs: snapsindia
"It (effort) has been vindicated. In Beijing, I missed going to the finals due to a technicality."

"I think only a little credit goes out to me, but my parents and sponsors have put in a lot of hard work which paid off."

On how he coped up with the pressure, Narang said, "Pressure was immense. I shot two nines today. I could have done better. But I am happy with my medal. It means a lot to a lot of people who have worked for this."

Narang finished third in the qualification with 598 and started the finals well by shooting 10.7 in the first round.

With pressure mounting on him to be consistent, Narang produced a 10.7 in the very last round to ensure that he remained in the medal bracket.
Tags: Narang , Beijing
More