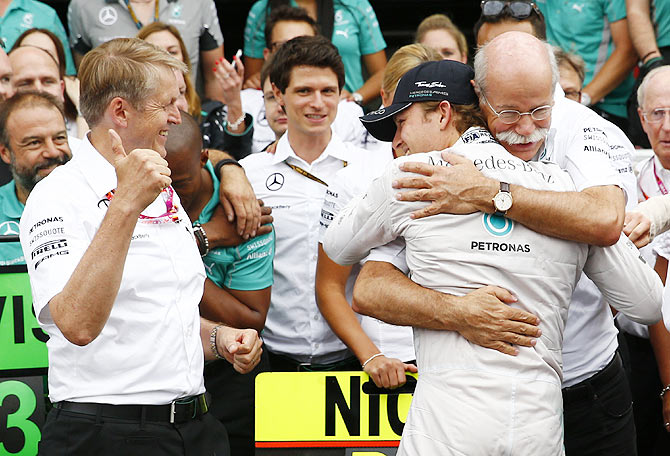 Rosberg had more reasons than one to celebrate his German GP win on Sunday.

Rosberg gave Germany another win to celebrate after their World Cup success with a home Grand Prix triumph for Mercedes on Sunday that stretched his overall lead in the Formula One championship to 14 points.

Untroubled from pole position to chequered flag, the newly-married German's commanding victory added another highlight to a week that had begun with the signing of a multi-year contract extension.

Lewis Hamilton, his teammate and only real title rival, finished third after starting in 20th place and then making 15 overtaking manoeuvres as he charged back through the field in one of the more determined drives of his career. 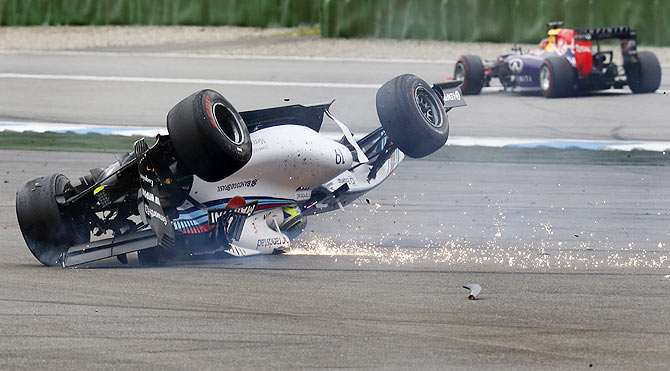 Image: Williams Formula One driver Felipe Massa of Brazil crashes with his car in the first corner after the start of the German F1 Grand Prix at the Hockenheim racing circuit on Sunday
Photographs: Kai Pfaffenbach/Reuters

Finland's Valtteri Bottas took second place for Williams, his third podium finish in a row and a hefty 20.7 seconds behind Rosberg, after Brazilian team mate Felipe Massa crashed at the start in a collision that brought out the safety car.

Rosberg was the first to win for a works Mercedes team in Germany since Argentine Juan Manuel Fangio in 1954 and first German home winner for a German team since the championship started in 1950.

"What a great day after so many great events for me this week," he said. "I came here hoping for a win and it worked out perfectly."

If it did not quite compare to getting married as the best feeling of all, it was still pretty good.

"That was the best feeling," he said of his Monaco wedding last week. 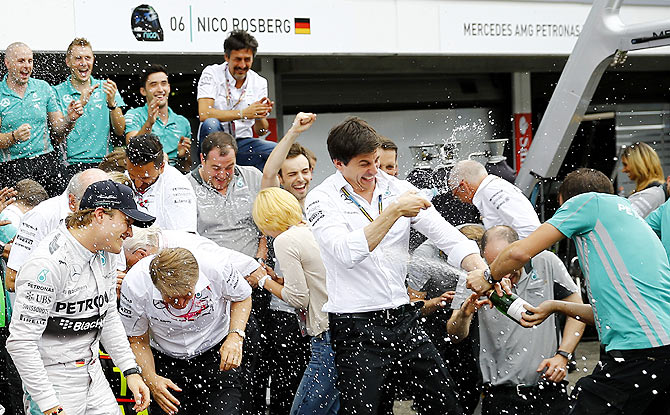 "But of course everything has been special...many positive things happening in the two weeks, or week and a half. It's been really enjoyable, and also this weekend with pole and the win.

Rosberg now has 190 points to Hamilton's 176 with Australian Daniel Ricciardo third on 106.

The German's fourth victory of the season had looked inevitable from the moment a brake disc failed on Hamilton's car in the first phase of qualifying on Saturday, sending the Briton spinning hard into the barriers.

Between them, the Mercedes drivers have won nine out of 10 races so far in 2014 and in normal circumstances would have been celebrating another one-two on an overcast afternoon that only turned to rain after the finish. 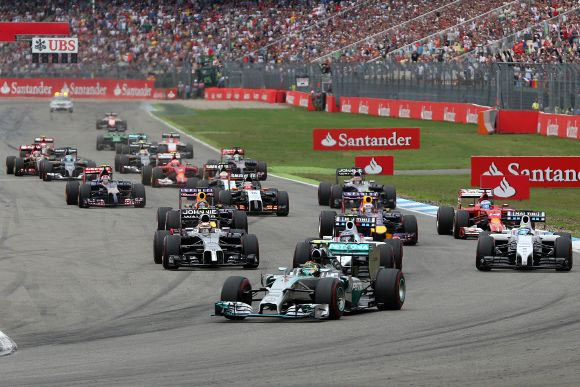 Image: Nico Rosberg of Germany and Mercedes GP leads the field into the first corner during the German Grand Prix on Sunday
Photographs: Mark Thompson/Getty Images

The 50,000 spectators, a disappointing attendance in a season dominated by Mercedes, were treated instead to the sight of Hamilton on a charge to limit the damage and a series of other thrilling duels further down the field.

Mercedes had warned fans to buckle up for the ride and Hamilton delivered with a swashbuckling drive that saw him go three abreast at times, picking off Kimi Raikkonen's Ferrari and Ricciardo's Red Bull in one swoop.

Hamilton was 10th after 10 of the 67 laps and up to second after 16, banging wheels and bodywork along the way but escaping with only a damaged front wing when he clipped former teammate Jenson Button's McLaren. 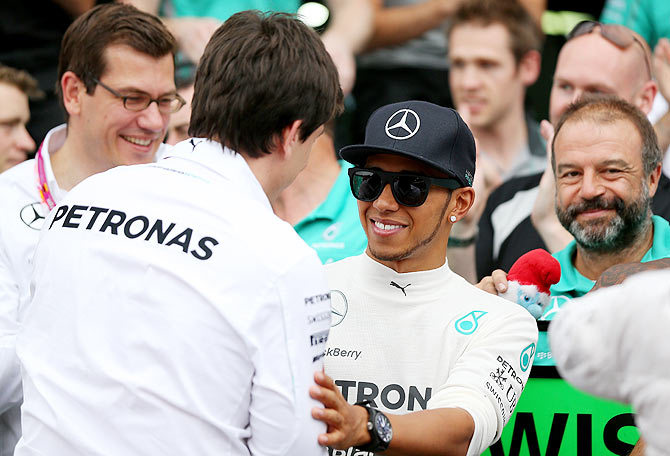 Had he not damaged the wing and lost downforce, he would probably have passed Bottas. But he could not prevent the Finn becoming the first Williams driver since Colombian Juan Pablo Montoya in 2003 to rack up three successive podiums.

"I had great fun," said Hamilton on the podium.

"I did as good as I could. It was hard to get through the pack safely and I had a little bit of a collision with Jenson. I thought he was going to open the door which he has done a couple of times lately but that was my bad judgement.

"It was hard to overtake so I'm glad to get some points today," added the 2008 champion. 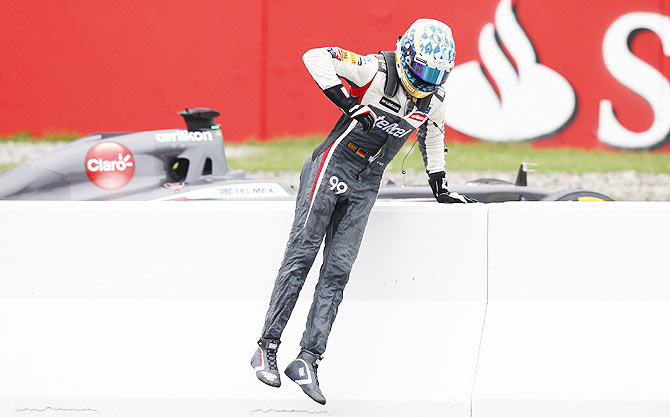 Image: Sauber Formula One driver Adrian Sutil of Germany leaves the track after having technical problems with his car during the German F1 Grand Prix on Sunday
Photographs: Ralph Orlowski/Reuters

Germany's quadruple champion Sebastian Vettel, last year's winner at the Nuerburgring, was fourth for Red Bull ahead of Ferrari's Fernando Alonso in fifth.

Danish rookie Kevin Magnussen, whose contact with Massa at the start after they lined up third and fourth pitched the Williams upside down, recovered to take ninth place.

Mexican Sergio Perez made it a double scoring finish for Force India.

There was also controversy at the decision not to deploy a safety car when Adrian Sutil's Sauber was left stranded for two laps in the middle of the track after the fast final corner into the pit straight.

Marshals eventually ran across the track, pushing it back as cars sped past.

Russian Daniil Kvyat also had to make a hasty exit from his Toro Rosso after it caught fire, with the car then engulfed in flames when he parked it up.