In a lop-sided women's singles title clash, the 23-year-old Indian, couldn't match the speed and accuracy of Marin during her 12-21, 5-21 defeat that lasted only 35 minutes.

It was Sindhu's third successive loss to Marin, who had won both the Super 1000 events in Thailand in January before finishing runners-up at the HSBC BWF World Tour Finals.

Playing her first final in 18 months, the 7thranked Sindhu entered the match with a 5-8 head-to-head record against Marin, having lost her last two matches against the former world no 1.

The World No 7 Indian, who didn't drop a game in the last four matches this week, however, failed to summon her A game as Marin came up trumps to claim her third title of the year.

Marin, the current World No 3, had also defeated Sindhu in the final of the Rio Olympics in 2016.

Sindhu was completely clueless against a rampaging Marin, who outclassed the Indian with her pace, power and precision.

In the opening game, Marin opened up a 2-0 lead early on, which was quickly erased by Sindhu as she stepped up the pace.

The Indian moved ahead 6-4 -- the only time she had a lead in the match -- but Marin again clawed back with Sindhu finding the net more often than not.

Sindhu missed a shot at the backline and committed a couple of unforced errors as Marin lead 9-6.

The Spaniard erred twice before winning a video referral. She then entered the mid-game interval with a healthy 11-8 advantage.

It was one-way traffic after the break as Marin continued the momentum, grabbing four straight points to move to 15-8. A precise return at the backline helped Sindhu to break the run of play.

But Sindhu couldn't vary the pace or take control of the net as Marin continued to march on, grabbing nine game points. Sindhu saved one before sending her backhand return to net to hand over the game to Marin.

Marin didn't take the foot off the pedal and continued to dominate the proceedings, zooming to a 5-0 lead in the second game.

A net error gave Sindhu the serve but the Indian just couldn't get going as she again faltered at the net and then miscued a forehand return. Marin soon moved to 8-2.

Sindhu then changed her racquet but that didn't change her luck as she went long next as Marin took a nine-point advantage at the interval.

Marin continued her ruthless march, moving to 14-2 before cruising to a winning position with a 18-3 lead leaving the Indian in complete despair.

The Spaniard eventually had 15 match points at her disposal and Spaniard sealed the issue with a cross-court return at the net which caught the Indian napping. 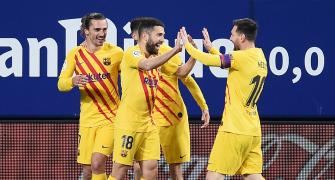