Saina in second round of Malaysia Open GP

Saina Nehwal got the better of Jiayuan Chen of Singapore 21-16, 21-12 to enter the second round of the women's singles in the Malaysia Open Grand Prix Gold, at Alor Setar, on Wednesday.

The top seeded Indian put behind the disappointment of the shock first-round defeat at last week's India Open Super Series to set up a meeting with Japan's Ayane Kurihara in the second round.

She is the only Indian left in the tournament, as the rest of the six Indian men -- Parupalli Kashyap, Gurusai Datt, Ajay Jayaram, Anup Sridhar, Arvind Bhat and Anand Pawar -- all lost their matches.

Guru Sai Dutt, who made it to the quarter-finals of the India Open Super Series, posed a tough fight to Beryno Jiann Tze Wong France before going down 21-19, 21-23, 18-21. 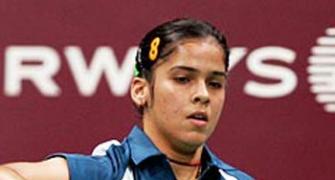