Torch begins final race to stadium from beneath Rio's Christ 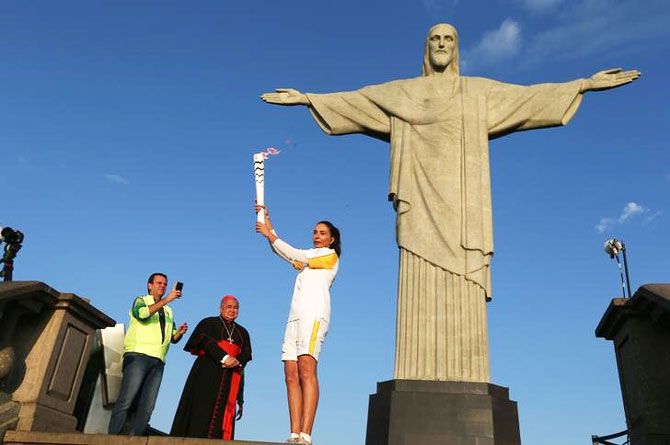 The Olympic torch was raised before Rio de Janeiro's iconic Christ the Redeemer statue on Friday on the final leg of its journey to the opening ceremony of the Olympics, as Brazil excitedly put the final touches to seven years of preparations.

At the evening ceremony in the famed Maracana soccer stadium, Brazil will declare open the 31st summer Olympic Games, the first to be held in South America. They run until Aug. 21.

Organizers hope the start of the Games will turn the page on months of bad publicity for Rio, from polluted water to faulty plumbing at the athletes' village and worries about the Zika virus. Having won the Olympics in 2009 during an economic boom, Brazil since slipped into its worst recession in decades.

"May this be the moment for us to overcome difficult times and to work as a team, to make our country and our world fairer and safer, full of hope and joy," said Rio's Archbishop Orani Joao Tempesta, flanked by Rio Mayor Eduardo Paes.

The torches' 95-day, 20,000-km journey across Brazil ran into difficulties this week as protests flared in poor towns around Rio against the $12 billion price tag of the Games, at a time when residents are suffering from high unemployment, rising crime and cutbacks to health and education spending.

Scenes of riot police using stun grenades and tear gas to clear protesters from the torch's path on Wednesday fuelled complaints that the Games had ignored the city's poor.

Rio will seek to put that behind it on Friday when fireworks light up the night sky above the Maracana. Some 50,000 spectators are expected, with some 3 billion people tuning in around the world as Brazil lifts the curtain on its second major sporting event in two years, after the 2014 soccer World Cup. 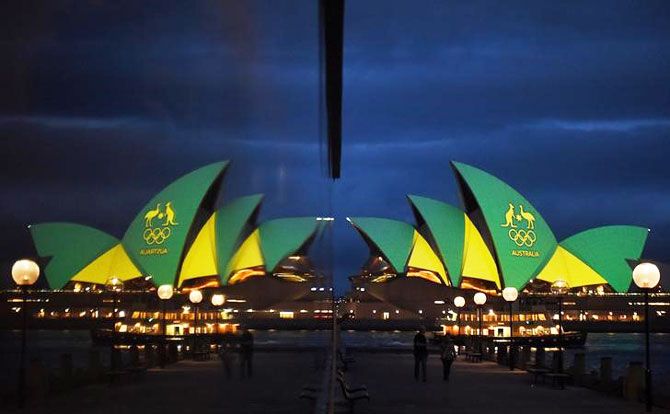 IMAGE: The Sydney Opera House is illuminated with the green and gold colours of the Australian Olympic team and reflected in a hotel window in Sydney, Australia, before the Olympics opening ceremony in Rio de Janeiro, Brazil, on Friday. Photograph: AAP/Mick Tsikas/via/Reuters

Security challenges in the sprawling beachside city are at the forefront of many people's minds, not only because of Rio's decades-old reputation for violent street crime, but also due to a spate of deadly attacks at big and small celebrations from Europe to the United States.

With many of the Games' 11,000 athletes and dozens of heads of state in attendance, it will be the first major test of Rio's preparedness.

"The security has been improved a lot, the security around here and in front of the stadium," said local resident Helder Leao, 56.

Brazil has deployed some 85,000 police and troops, roughly twice the number at London's 2012 Olympics, to protect locals and the half million tourists expected to visit the city.

Rio has consistently pulled off massive events with few security hiccups, including Carnival, the 2014 World Cup final and one of the world's biggest New Year's Eve bashes.

Brazil's political crisis could crash the party as interim President Michel Temer opens the Games. In a bitterly divided country, protesters are encouraging spectators to boo Temer, who took over after the Senate voted to subject leftist President Dilma Rousseff to an impeachment hearing this month. The leftist leader is expected to be dismissed from office.

In a statement released on Friday, Temer appealed to his countrymen to make the Olympics a moment of "international unity and national reconciliation".

In what organizers have called a low-tech ceremony constrained by the dire economy, Brazil will showcase its natural treasures and the cultural riches created by one of the world's most diverse nations.

Samba, Carnival and the famously fun Brazilian spirit are expected to play heavily into the three-hour ceremony, as will a call to save the planet from climate change.

One of the most anticipated moments will be seeing which famous Brazilian will light the Olympic cauldron. The odds-on favorite is soccer legend Pele.

© Copyright 2022 Reuters Limited. All rights reserved. Republication or redistribution of Reuters content, including by framing or similar means, is expressly prohibited without the prior written consent of Reuters. Reuters shall not be liable for any errors or delays in the content, or for any actions taken in reliance thereon.
Related News: Rio de Janeiro, Brazil, Rio Mayor Eduardo Paes, Orani Joao Tempesta, Michel Temer
COMMENT
Print this article