Kenya's David Rudisha stormed to victory in the Olympic 800 metres final on Monday, retaining his title with a devastating final-lap sprint.

Rudisha, the world champion and world record holder, hit top gear in the final 300 metres to become the first man since New Zealander Peter Snell in 1964 to successfully defend the Olympic 800m title.

"I am so excited. It is the greatest moment of my career," Rudisha told reporters.

Rudisha struggled for much of the season and came third in Kenya's Olympic trials but burst into form as the Games neared, setting a season's best time of 1.42.15 to snatch gold.

After winning his first Olympic gold and setting a world record at the London Games, Rudisha suffered a couple of injury-ravaged years that dented his confidence and caused him to miss the 2013 world championships. 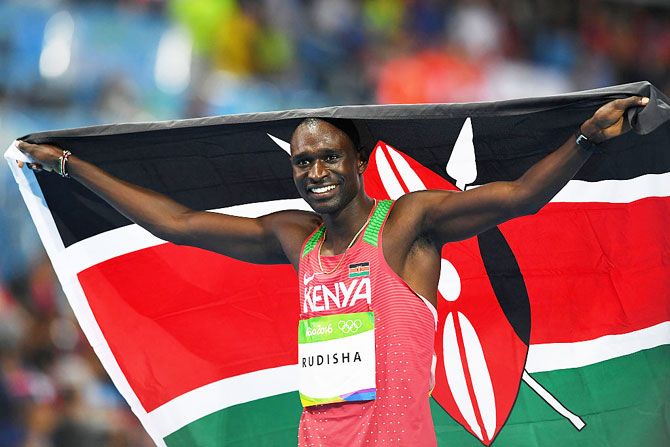 But the six foot three inches tall Maasai runner looked in total control of the race as his long stride and fluid running style propelled him to victory.

"It's been very difficult," Rudisha said, referring to his injuries.

"I have stayed focused and positive. My coach has been great and given me hope."

The 27-year-old crossed the line several metres ahead of Algeria's Taoufik Makhloufi, the London Games gold medal winner over 1,500m.

© Copyright 2021 Reuters Limited. All rights reserved. Republication or redistribution of Reuters content, including by framing or similar means, is expressly prohibited without the prior written consent of Reuters. Reuters shall not be liable for any errors or delays in the content, or for any actions taken in reliance thereon.
Related News: David Lekuta Rudisha, Getty Images, IMAGE, Quinn, Kenya
COMMENT
Print this article