Australia celebrated its ancestry and native traditions in a soul-stirring Commonwealth Games opening ceremony but protests by indigenous aboriginals against the very idea of Commonwealth came as a poignant reminder of the unforgotten colonial brutalities.

Ironically, Australia's aboriginal heritage was the central theme of the ceremony which lasted a little over two hours under overcast and often drizzling skies.

The buzz that seemed lacking in the build-up to the Games was very much there during the ceremony, attended by the British Royals, as Gold Coast turned out in numbers to welcome 71 nations of the Commonwealth.

The Indian contingent, led by flag-bearer Olympic silver-medallist P V Sindhu walked out to a warm reception from the nearly 25,000 strong crowd which filled up the stadium that will also host the athletics event as well.

The Indians ditched tradition for comfort in the ceremony, marching out in blazers and trousers rather than the conventional sarees and bandhgalas.

"It is fitting that the Commonwealth Games is known as 'The Friendly Games' as one of the world's friendliest countries has invited us into their homes for this momentous sporting event," said Prince Charles, representing the Queen at the ceremony, before declaring the Games open.

Accompanied by his wife Camilla Parker Bowles, Prince Charles walked along the parade track, cheered on by a packed stadium. The Royal couple had landed in Brisbane this morning.

They were welcomed warmly as they walked with two Yugambeh Elders, Ted Williams and Patrica O'Connor. Yugambehs are an aboriginal tribe, who number a mere 10,000 in Australia but are a symbol of Australia's indigenous past.

In fact, it was all about revisiting the past as the ceremony paid an emotional homage to the Australian heritage, especially the aboriginals, the indigenous people who suffered massively after the European invasion in the country.

Here are some photographs from the Opening Ceremony: 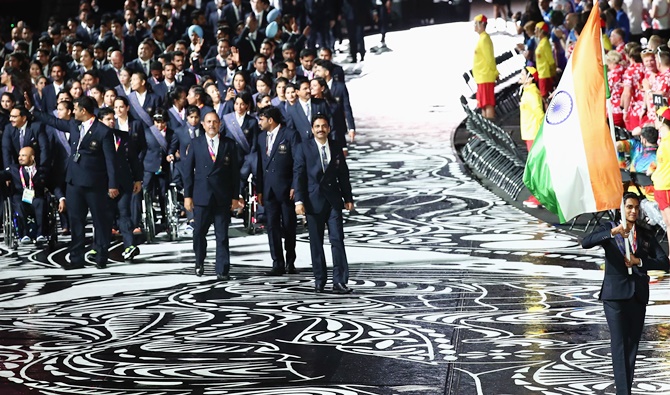 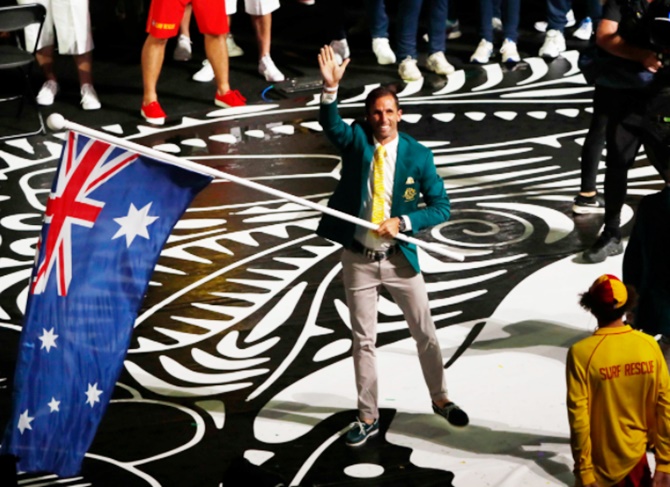 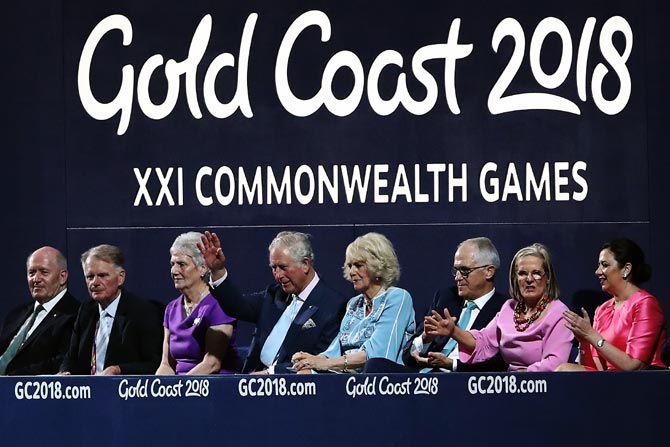 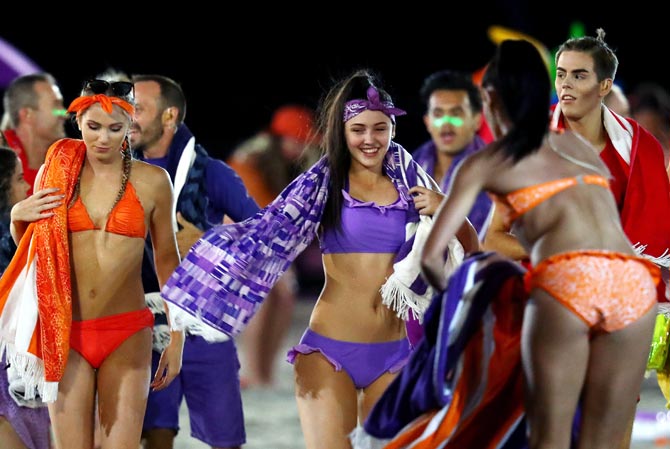 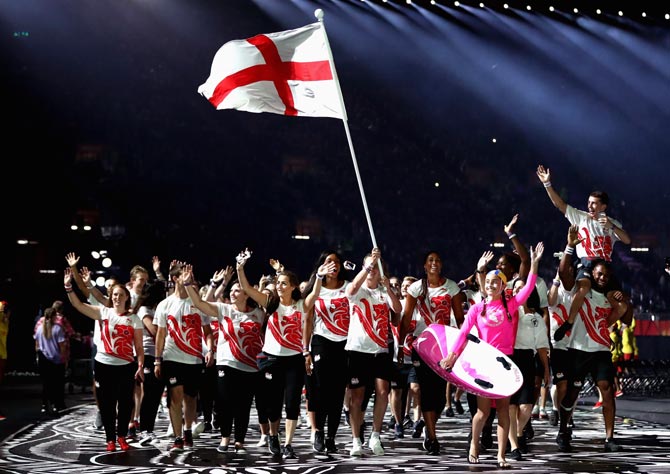 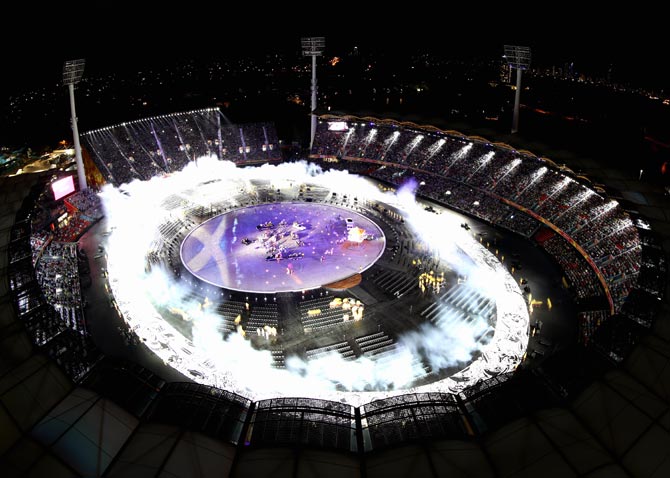 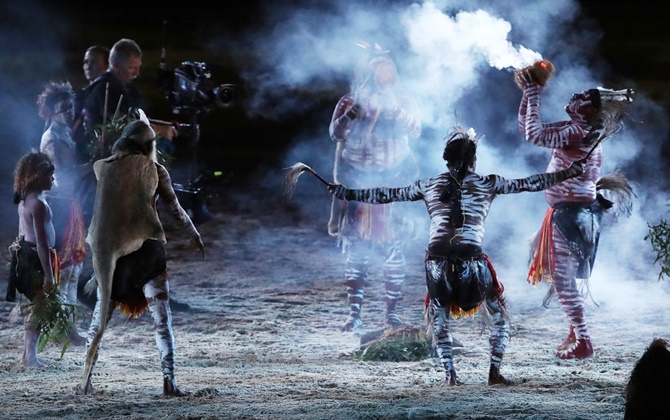 IMAGE: Australia's aboriginal heritage was the central theme of the ceremony which lasted a little over two hours under overcast and often drizzling skies. Photograph: Hannah Peters/Getty Images 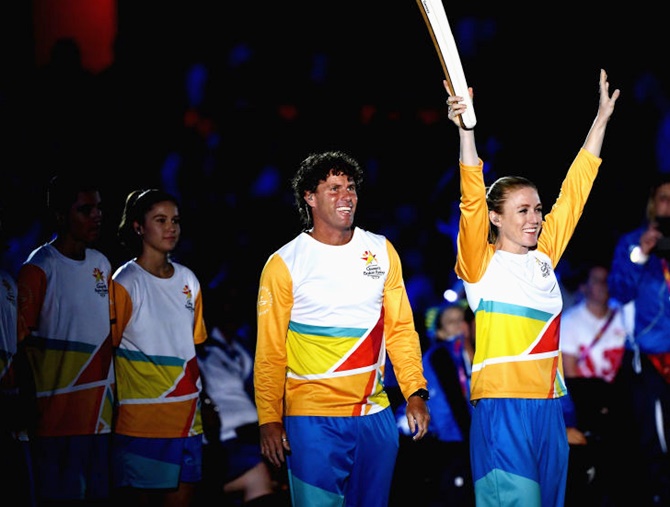 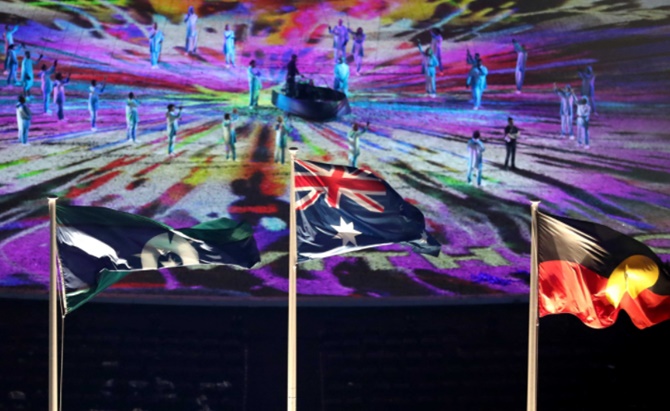 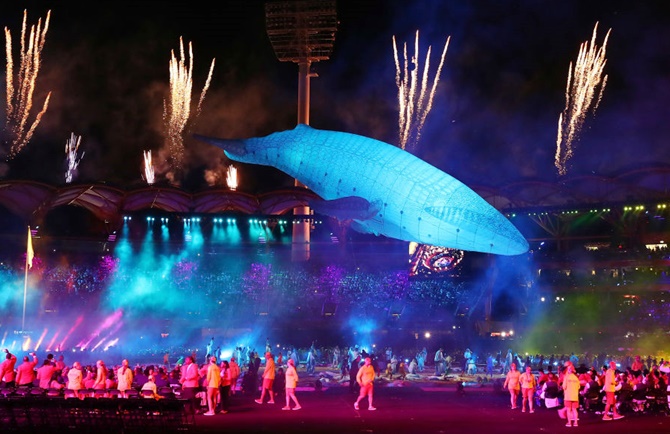 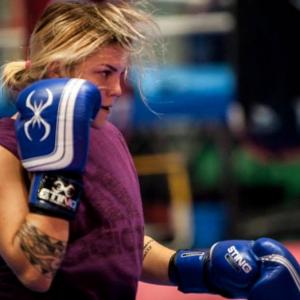