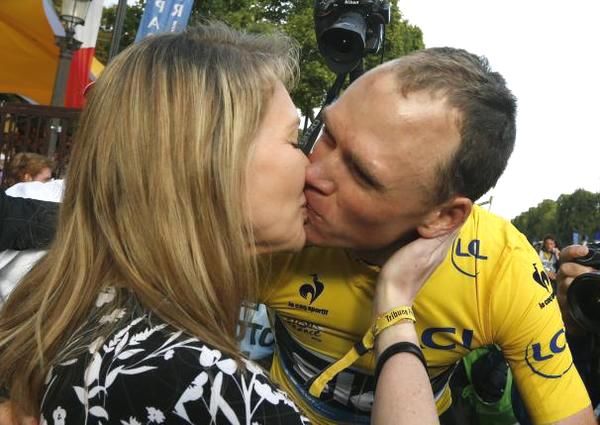 Team Sky rider Chris Froome of Britain (right), the race leader's yellow jersey, is kissed by his wife Michelle as he celebrates his victory after the 109.5-km (68 miles) final 21st stage of the 102nd Tour de France cycling race from Sevres to Paris Champs-Elysees on Sunday. Photograph: Pascal Rossignol/Reuters

It was Team Sky's third Tour triumph in four years after Bradley Wiggins prevailed in 2012 before Froome succeeded him in 2013.

The 30-year-old Froome, a late bloomer who surged into the limelight when he took second place in the 2011 Tour of Spain, beat Colombian Nairo Quintana by one minute 12 seconds and his Movistar team mate Alejandro Valverde of Spain by 5:25.

"Le Maillot Jaune (the yellow jersey), I know its history both good or bad. I will honour this jersey and what it stands for," Froome, who was roughed up by spectators after an intimidating performance on the first mountain stage, told the crowd from the podium.

The leading trio stayed safe in Sunday's finale on the Champs Elysees, where German Andre Greipel confirmed he was the fastest by overpowering the rest of the field to take the 21st stage, his fourth win on this year's Tour.

"I have dreamt about this, it's the biggest stage a sprinter can win," Greipel told reporters.

Billed as a four-way battle between Froome, Quintana, Alberto Contador and Vincenzo Nibali, the Tour quickly turned into a duel after the double Tour winner from Spain and the Italian defending champion cracked in the Pyrenees.

Froome, the first Briton to win the Tour twice, made his mark in the mountain stage to La Pierre St Martin in the 10th stage before riding defensively to hold off Quintana, who came close to make him crack in Saturday's stage to l'Alpe d'Huez. 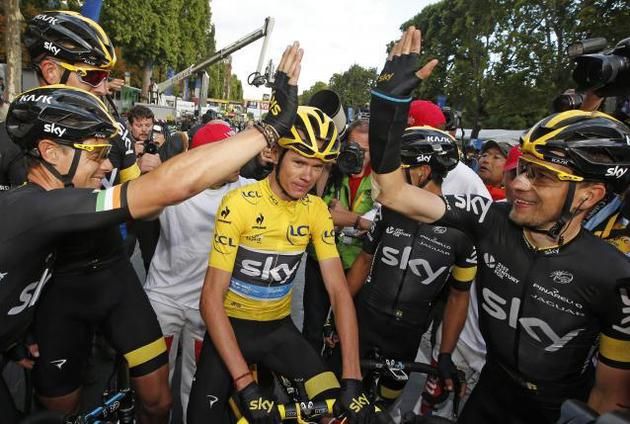 Froome, who crashed out of the race last year, also relegated Quintana to second place in 2013 and their rivalry could develop into a classic one.

Because rain had made the tiny cobblestones of the Champs Elysees slippery, the clock was stopped 41 km into the 109.5-km stage on Sunday but Froome still had to complete it to be officially crowned champion.

He finished safely in the main bunch as the sprinters contested the last action of the three-week race around the Champs Elysees.

All the major honours had been decided on Saturday.

Quintana won the white jersey for the best Under-25 rider for the second time after 2013, and Froome was the first rider to win both the yellow jersey and the polka dot jersey for the mountains classification since Carlos Sastre in 2008.

The record belongs to German Erik Zabel who won it six times in a row from 1996.

Always on the attack, Sagan would have deserved to be voted the most aggressive rider of the race but that prize went to Frenchman Romain Bardet.

© Copyright 2020 Reuters Limited. All rights reserved. Republication or redistribution of Reuters content, including by framing or similar means, is expressly prohibited without the prior written consent of Reuters. Reuters shall not be liable for any errors or delays in the content, or for any actions taken in reliance thereon.
Related News: Chris Froome, Nairo Quintana, Peter Sagan, Andre Greipel, Reuters
SHARE THIS STORYCOMMENT
Print this article