Images from Day 9 of the 2020 French Open, at Roland Garros, in Paris. IMAGE: Serbia's Novak Djokovic celebrates winning a point during his fourth round match against Russia's Karen Khachanov at the French Open, on Monday. Photograph: Gonzalo Fuentes/Reuters

Top seed Novak Djokovic passed his first real test at this year's French Open with flying colours as he battled past Russia's Karen Khachanov 6-4, 6-3, 6-3 on Monday to reach the quarter-finals for the 14th time.

The 33-year-old claimed a fourth successive straight-sets victory in his latest quest for a second French Open title, but it was nowhere near as straightforward as the score suggests.

Djokovic faced stiff resistance before taking the first set and had an anxious moment when his attempted return off one Khachanov serve ricocheted off his frame and struck a line judge in the head, reviving memories of his US Open debacle.

Djokovic appeared to be in cruise control when he led 2-0 in the third but Khachanov took the next three games and had two break points for a 4-2 lead.

The Serb held, though, and regained control to ease into his 47th Grand Slam quarter-final where he will face either German qualifier Daniel Altmaier or 17th seed Pablo Carreno Busta, the man Djokovic was facing in the US Open fourth round when he was defaulted for hitting a line judge with a ball. Stefanos Tsitsipas reached the quarter-finals of a Grand Slam for the second time as he brushed aside Grigor Dimitrov 6-3, 7-6(9), 6-2 at the French Open.

The Greek fifth seed was solid on serve throughout and played neatly as his Bulgarian opponent lost focus at crucial times under the roof of Court Philippe Chatrier.

Last year's ATP Finals winner Tsitsipas, whose best result at a major is reaching the Australian Open semi-finals in 2019, will next face Russian 13th seed Andrey Rublev, with a last-four clash with world number one Novak Djokovic looming.

"I felt comfortable. Playing Grigor... he can be unpredictable so coming into the match you don't know what to expect," said Tsitsipas.

"We have a similar style of play so I knew if I could be as aggressive as possible and use my forehand and my serve I knew my opportunities would come.

"My aggressiveness on return games and my focus on important points made the difference."

The 22-year-old raced to a 3-0 lead in the first set. Eighteenth seed Dimitrov went up a gear at 5-3, only to see three break points saved by Tsitsipas, who served it out to take the set.

"The tiebreak was where all the money went. I tried to take it point by point, I showed a lot of discipline. It was a very responsible win in the second set," said Tsitsipas, who had a medical time out for an irritated left eye.

Being two sets down looked too big a mountain to climb for Dimitrov, who buried a volley into the net to hand his opponent the first break in the third set.

The black-clad Greek went on to wrap up a straightforward win on Dimitrov's serve.

Rublev battles back to beat Fucsovics and reach quarter-finals Russian Andrey Rublev reached his second successive Grand Slam quarter-final as he hit back to beat Hungary's Marton Fucsovics 6-7(4), 7-5, 6-4, 7-6(3) at the French Open.

The world number 12 looked in big trouble when he trailed by a set and 5-2 but rallied to end the run of Fucsovics who had shocked Rublev's compatriot Daniil Medvedev in round one.

Rublev, who will take on Greek Stefanos Tsitsipas for a place in the last four, is one of the form players of the year and his win was his 29th in 35 Tour-level matches.

Fucsovics was trying to become the first Hungarian man to reach a Grand Slam quarter-final for 39 years and will rue a missed opportunity.

As well as building a commanding early lead he also had three set points when Rublev served at 4-5 0-40 in the fourth set but hit two backhand errors. Rublev, who won the Hamburg title on the day the French Open began, then dominated the tiebreak with aggressive tactics.

Rublev, 22, has shown his battling qualities already this year at Roland Garros, coming back from two sets down in the first round against American Sam Querrey. On yet another chilly day in the French capital, seventh seed Kvitova's superior firepower proved decisive as she posted her fourth successive straight-sets victory.

With so many big names already out, twice Wimbledon champion Kvitova will sense a golden title opportunity as she heads into a quarter-final against unseeded German Laura Siegemund.

"It was a great one today for sure," said Kvitova, who returned to action at the 2017 French Open following a knife attack six months earlier that left her with career-threatening hand injuries.

"To be back on the same court that I made my comeback and to make the quarter-final is something I didn't expect. I'm trying to play faster here and play aggressive off the returns," she told Eurosport. 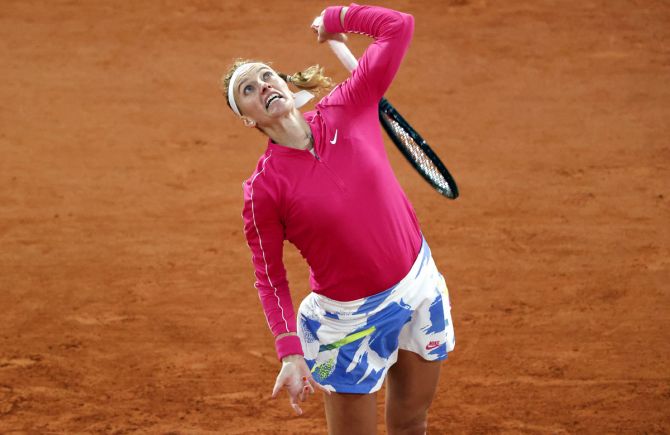 The 30-year-old, whose best finish here was reaching the 2012 semi-finals, made her intentions clear from the start as she seized on anything short to dominate from the baseline, moving 4-0 ahead in 15 minutes on Court Philippe Chatrier.

Zhang, in the fourth round of a Slam for only the third time in 33 attempts having also not dropped a set so far, finally began to dig her heels in as Kvitova's error-count increased but she was unable to turn the tide.

Kvitova had to wait around in the cold as Zhang took a medical timeout at the end of the first set, but she turned up the heat to get an early break in the second set.

She broke again to lead 5-2 but some wild errors allowed the Chinese to win two straight games and create some tension.

Kvitova regained her focus though to seal victory with a love service hold. Both players struggled on serve in the opening set of their see-sawing fourth-round meeting on Court Simonne Mathieu, before Siegemund switched gears at 5-5 to claim the decisive break and take the early advantage in the contest.

Badosa, a former junior champion who knocked out 2017 winner Jelena Ostapenko in the previous round and 2018 runner-up Sloane Stephens in her second match, found herself down 3-1 in the second set as Siegemund turned up the heat.

World number 66 Siegemund fought off a spirited comeback attempt from Badosa to stretch the lead further with a break in the seventh game of the second set, before closing out her victory in style.

Carreno Busta had to weather a second-set fightback by the 22-year-old but proved too experienced as he reached the quarter-final for the second time.

His reward is a clash with top seed Novak Djokovic in a repeat of their U.S. Open fourth round when the Serbian world number one was defaulted for inadvertently hitting a line judge with a ball.

Altmaier had already dispatched seeds Jan-Lennard Struff and Matteo Berrettini and was hoping to become the first player to reach the quarter-final of his maiden Grand Slam appearance since Alex Radulescu at Wimbledon in 1996.

After the match was switched to under the Court Philippe Chatrier roof because of rain the opening games were hard-fought but Carreno Busta broke the 186th-ranked Altmaier's serve twice to eventually ease through the opening set.

But Altmaier, who models his game on former French Open champion Stan Wawrinka, was undeterred and began to rock the Spaniard with some bludgeoning groundstrokes, especially his single-handed backhand, in the second set.

He broke serve in the sixth game and led 5-2 but then threw away all his hard work when he double-faulted twice and made some rash errors when he served for the set at 5-3.

Carreno Busta needed no second opportunity to stamp his authority back on the match and went on a nine-game winning sequence to lead 4-0 in the third set.

Altmaier did stop the rot but there was no way back as Carreno Busta, who lost in the semi-finals of the US Open, sealed victory just after 11pm local time.

American fourth seed Sofia Kenin appeared to be unnerved by the cheers of the sparse partisan crowd as she recovered from a wobbly start to reach the French open quarter-finals with a 2-6, 6-2, 6-1 victory over France’s Fiona Ferro on Monday.

The Australian Open champion, who next faces compatriot Danielle Collins or Tunisian Ons Jabeur, broke into tears after ending the contest with a service return winner.

She complained that the crowd had been unfair to her.

"The crowd wasn't the best, which is understandable, but still I wish it would have been a little bit different," she told a news conference.

"I tried to use that as motivation. Obviously I was not really too happy with how it was going. I knew it's expected. I understand why. I'm playing a French player, and she's had a great run here."

A maximum of 1,000 spectators are allowed per day at Roland Garros amid COVID-19 restrictions, and some 500 attended the match on court Philippe Chatrier, voicing their support for Ferro.

It took Kenin a while to find her range but once she did, she went through the gears and demolished the world number 49, the last French player in the women's singles draw.

Kenin broke Ferro's first service game and moved 2-0 up, only for the Frenchwoman to win six games in a row to bag the opening set, greatly helped by her opponent's 16 unforced errors.

Kenin, however, took the ball earlier in the second set, which changed the face of the match as Ferro could not keep up with the American's pace.

Her aggressiveness was just too much to handle for Ferro, who then never looked able to turn the tide.

"(After the first set) she stared to take the ball earlier and play a little longer and for me it was tougher to react, tougher to adjust. I had a good first set but then she raised her level," said Ferro.

© Copyright 2022 Reuters Limited. All rights reserved. Republication or redistribution of Reuters content, including by framing or similar means, is expressly prohibited without the prior written consent of Reuters. Reuters shall not be liable for any errors or delays in the content, or for any actions taken in reliance thereon.
Related News: Petra Kvitova, Laura Siegemund, Paula Badosa, Shuai Zhang, IMAGE
COMMENT
Print this article 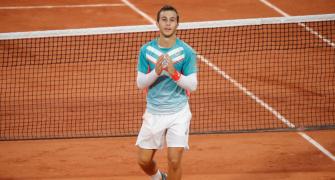 Coolest day of my life, says Korda, after Rafa beating