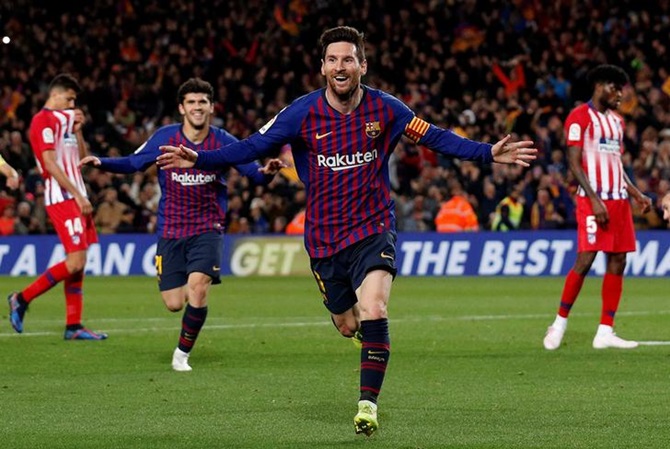 Barcelona closed in on the La Liga title after beating 10-man Atletico Madrid 2-0 in Saturday's top-of-the-table showdown at the Nou Camp as late strikes by Luis Suarez and Lionel Messi gave the Catalans an 11-point lead at the top of the table.

Atletico began brightly but their gameplan went out of the window when Diego Costa was shown a straight red card in the 28th minute for a verbal tirade at referee Jesus Gil Manzano.

Atletico produced a gutsy second-half display, expertly shackling Barca, but the Catalans finally found a way past the visitors' outstanding goalkeeper Jan Oblak with a superb curling shot from Suarez in the 85th minute.

Moments later Messi sealed victory and quite probably the league title with an irresistibly cool finish into the net and Barca's fans jubilantly chanted "champions", crowing at their surely unassailable lead at the top with seven games remaining.

Atletico midfielder Koke conceded that Barca had wrapped up the title but questioned the decision to send Costa off.

"Barca are practically champions. It was a very strange game, we were doing so well until the red card but all the small details went their way," Koke told reporters.

"Whenever we come here something strange happens, we've had a lot of red cards against Barca and not all of them have been fair. When you have 10 men against one of the best teams in the world it's normal that it's a struggle." 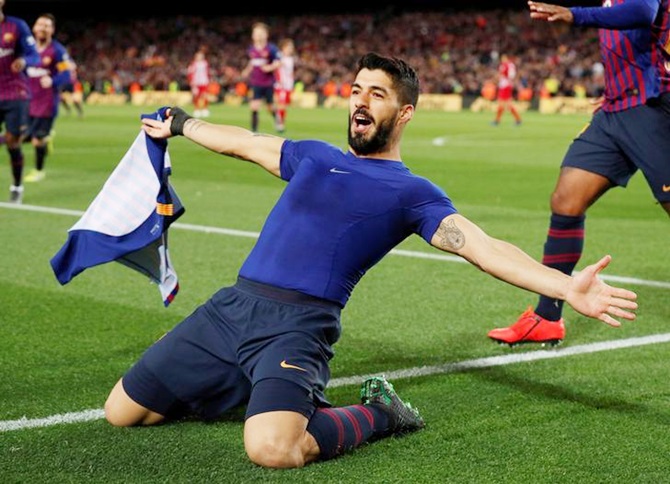 Suarez highlighted his side's character for winning such a difficult game so soon after their gruelling 4-4 draw against Villarreal in midweek.

"This was another game which shows just how hard it is to win the league so we deserve lot more credit for what we're achieving," Suarez said.

"We've now got a very big advantage over Atletico. There are still some games left but we took two steps towards winning the league today."

Atletico realistically needed to win at the Nou Camp for the first time since 2006 to stay in the title race and they played with ambition and intelligence in the opening stages, keeping the ball for long periods and depriving Barca of space.

But they were rocked by Costa's moment of madness which killed their early momentum and left them with little choice but to defend for the remaining hour of the game.

Striker Costa reacted angrily to not being awarded a foul after being tackled by Jordi Alba and gave a long verbal response to the referee, who to his disbelief pulled out a red card.

Costa had to be shepherded off the pitch by Barca's Gerard Pique as he struggled to control his temper while his team mates Diego Godin and Jose Gimenez earned bookings for venting their anger over the decision.

Atletico coped superbly with the setback and numerical disadvantage, controlling the space for the majority of the game.

Messi still carved his way through the middle of the pitch on two occasions, creating openings for Suarez and himself but both South American forwards were thwarted by the titanic presence of Oblak.

Atletico naturally had limited opportunities down the other end but were not far from finding a goal when Antoine Griezmann picked out Rodrigo from a free kick but the midfielder headed over the bar when Gimenez was stood behind him, in a better position.

Diego Simeone's side could not last the distance, however, and as their legs inevitably tired, Barca's attacking quality made the difference. Karim Benzema scored twice as Real Madrid came from behind to beat Eibar 2-1 at home on Saturday in Zinedine Zidane's 100th La Liga game in charge of the club.

Benzema had an early strike disallowed at a barely half-full Santiago Bernabeu for offside and the visitors took a surprise lead in the 39th minute thanks to a cool finish from forward Marc Cardona, who is on loan from Barcelona.

Eibar had humbled Madrid 3-0 back in November and looked to be on course to do the double on the deposed European champions until Benzema headed in an equaliser in the 59th minute, shortly after being denied again by the linesman's flag.

Benzema netted another header in the 81st minute to put Madrid in front and the Frenchman passed up two opportunities to clinch a hat-trick in the closing stages, missing the target and then hitting the post in stoppage time.

Madrid moved on to 60 points after 31 games thanks to the victory but remain third in the standings, 10 points behind leaders Barcelona who host nearest challengers Atletico Madrid in a top-of-the-table clash later on Saturday.

"We have had many games like that this season, I don't think we lacked attitude but we did lack confidence and we didn't have a clear idea of how we wanted to play," said Madrid defender Nacho.

"At halftime Zidane told us to show character and be more confident. We managed to react well to going behind and we played well in the second half."

Madrid had fallen to their first defeat since Zidane returned to the club with Wednesday's 2-1 loss at Valencia and the Frenchman again made several changes to his side, who have nothing to play for but pride in the remainder of the campaign.

He rested captain Sergio Ramos and dropped Toni Kroos and Casemiro to the bench in favour of inexperienced Uruguayan midfieder Federico Valverde, while bringing Spanish youngster Sergio Reguilon back in for the suspended Marcelo.

Gareth Bale also returned to the lineup and he put the cross in for Benzema's first disallowed goal but had strayed offside before he made the pass.

The Wales international again came in for heavy boos from his own supporters for two missed chances and was taken off for Kroos with the game tied at 1-1.

The Germany midfielder bore the brunt of criticism for the defeat in Valencia but made amends by picking out Benzema for the winning goal. 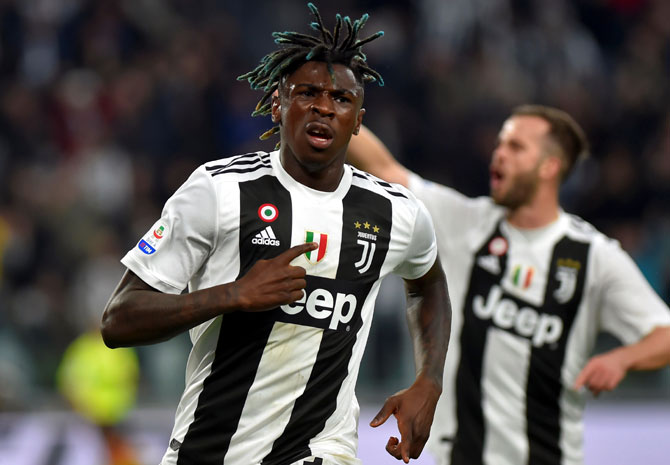 Teenage striker Moise Kean struck again to give Juventus a late 2-1 win over AC Milan after their opponents had taken the lead and dominated most of the match on Saturday.

Juve's win moved them 21 points clear at the top of Serie A and means they will wrap up an eighth successive Serie A title with seven games to spare if second-placed Napoli lose at home to Genoa on Sunday, the Turin side having the better head-to-head record.

Paulo Dybala levelled on the hour when he won and converted a penalty before substitute Kean - the victim of alleged racist abuse in Tuesday's win at Cagliari -- netted in the 84th minute. 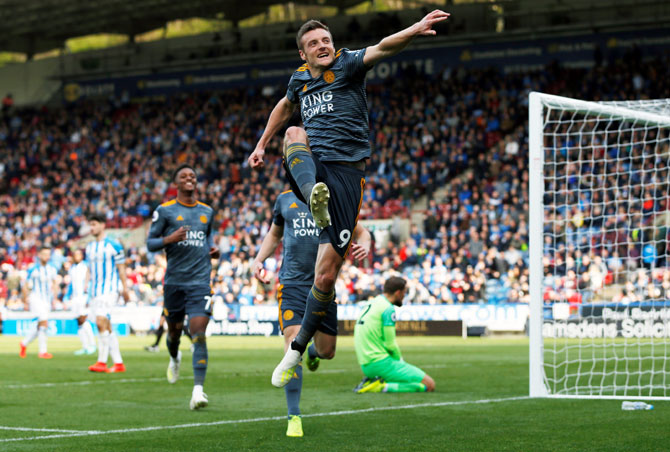 Striker Jamie Vardy scored twice to help Leicester City to a commanding 4-1 victory over relegated Huddersfield Town in the Premier League on Saturday.

It was a fourth win in a row for manager Brendan Rodgers who took charge of Leicester in February as Huddersfield missed the chance to move off the bottom of the standings for the first time since December.

"We got off to a good start, getting the first goal of the game again, which is important," Rodgers told reporters.

"We had other opportunities to be more convincing in the first half on the breakaway but didn't quite finish them and the keeper made a couple of good saves."

Leicester's Youri Tielemans opened the scoring with a long-range strike following a corner in the 24th minute.

Vardy doubled the lead three minutes after the break when he got on the end of a sublime cross from right back Ricardo Pereira.

James Maddison restored Leicester's two-goal advantage with a free kick in the 79th minute. Goalkeeper Ben Hamer misjudged the trajectory and took a step to his right before realising too late that the shot was headed to his left.

"When they scored the third our heads dropped and it's difficult," Mooy told BBC. "We've had such a tough season and it's just another day when we were not good enough. It's been a really hard week emotionally."

Vardy sealed victory with a penalty when Terence Kongolo fouled him after he had rounded the goalkeeper.

It was his 104th goal for Leicester, going past former England striker Gary Lineker's haul for the club, and his 15th league goal of the season.

"I can take positives, we don't like the result at all," Huddersfield manager Jan Siewert said. "At halftime we were down 1-0 and we changed it and came out and tried everything... and they scored too easily."

The result lifted Leicester to seventh in the standings with 47 points from 33 games, ahead of Wolverhampton Wanderers on goal difference. 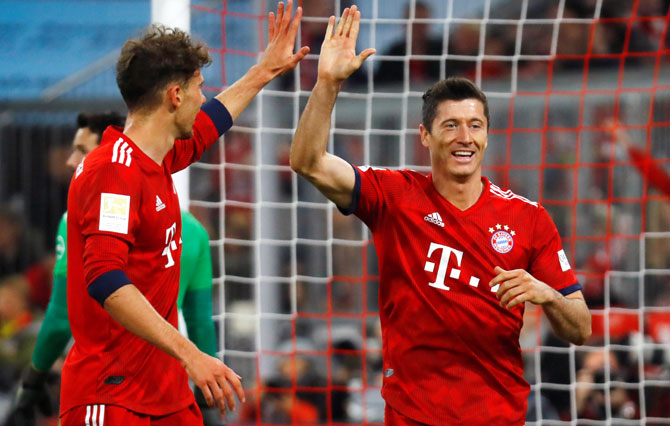 Champions Bayern Munich dismantled Bundesliga title rivals Borussia Dortmund 5-0 on Saturday, scoring four goals in a flawless first half to reclaim top spot and get back on course for a record-extending seventh straight league crown.

The Bavarians exploded into action and scored twice in the opening 17 minutes through Mats Hummels and Robert Lewandowski, adding two more from Javi Martinez and Serge Gnabry to move a point ahead of second-placed Dortmund.

Lewandowski's strike meant the Polish forward became only the fifth player in Bundesliga history to reach the 200-goal mark and the first foreigner to do so.

The hosts, who drew 1-1 at Freiburg last week, stepped off the gas after the break and controlled the game before Lewandowski scored again in the 89th minute and Bayern moved up to 64 points with six matches remaining.

© Copyright 2020 Reuters Limited. All rights reserved. Republication or redistribution of Reuters content, including by framing or similar means, is expressly prohibited without the prior written consent of Reuters. Reuters shall not be liable for any errors or delays in the content, or for any actions taken in reliance thereon.
Related News: Karim Benzema, Leicester, Huddersfield, Real Madrid, Bayern Munich
SHARE THIS STORYCOMMENT
Print this article 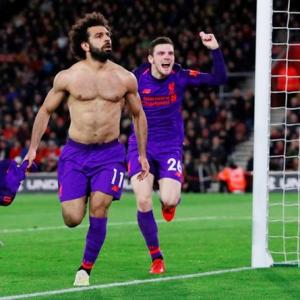