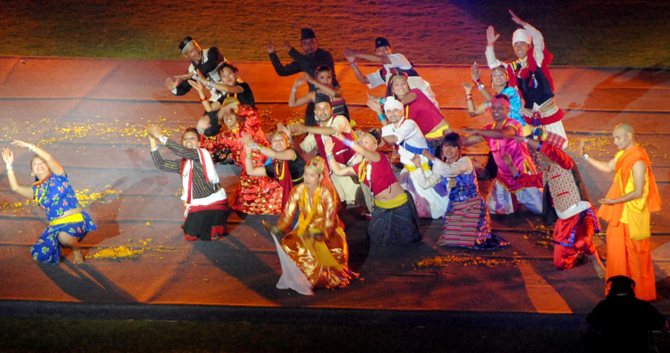 IMAGE: Artistes from Nepal perform at the closing ceremony of the 12th South Asian Games in Guwahati. Photograph: PTI

Northeast India's diverse and colourful culture were in full display as the curtains were brought down on the 12th South Asian Games amid magnificent fireworks that lit the night sky over Guwahati.

The Games flame at the cauldron was extinguished as the Guwahati night sky was lit with fireworks. The flag of the South Asian Olympic Council was lowered and handed over to the officials of next host country - Nepal. 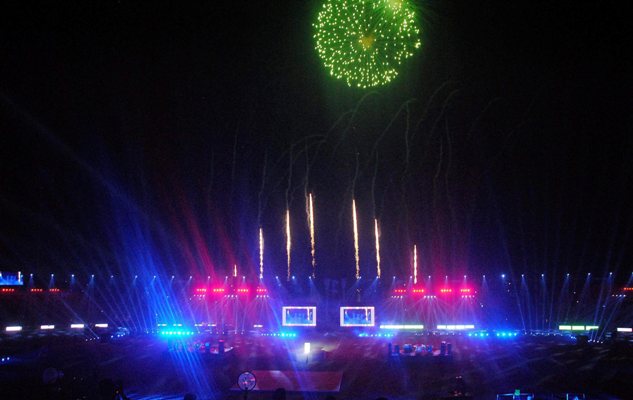 IMAGE: A scene from the closing ceremony of the 12th South Asian Games at Indira Gandhi Athletics Stadium in Guwahati. Photograph: PTI

Sonowal handed the flag to the President of the South Asian Olympic Council N Ramachandran, who in turn handed it to 13th SAG Organising Committee Chairman and Nepal Olympic Committee chief Jeevan Ram Shreshtha in the presence of Nepal Sports Minister Satyanarayan Mandal.

India, hosting the Games for the third time after Calcutta (1987) and Madras (1995), overwhelmingly dominated the 12th edition by grabbing an unprecedented 308 medals (188 gold, 90 silver, 30 bronze) and stamped their superiority as an unrivalled region sporting power.

Sri Lanka were a distant second with 25 gold, 63 silver and 98 bronze while Pakistan ended at third with 12 gold, 37 silver and 57 bronze. India, in fact, bagged more than three-fourth of the total 239 gold on offer in 23 disciplines.

The Games, which were inaugurated by Prime Minister Narendra Modi on February 5 during a spectacular opening ceremony, had been quite a success on the sporting front though there were organisational issues, including provision of media facilities.