Paraguay's squad for the World Cup finals in Germany will comprise the following 23 players:

(Statistics up to and including May 23 2006. They do not include match to be played against Norway on May 24 in Oslo)

First-choice goalkeeper who has filled the void left by former captain Jose Luis Chilavert. Less flamboyant and does not share his predecessor's ability to score from free kicks, but more solid between the posts. Won the Argentine Apertura championship with Newell's in 2004.

Made his debut in a friendly against Ecuador earlier this year at the age of 32 and has so far looked solid. Likely to be the first-choice reserve for Villar at the World Cup.

Played in a handful of friendlies and won a last-minute place on the strength of some outstanding performances for his club in this year's Libertadores Cup. Likely to start as the third choice.

Central defender who can also play as an improvised full back. Played at the 2002 World Cup, had a spell out of the team and was brought back during the 2006 qualifiers. Began his career with Olimpia and spent one season in Argentina with Lanus before moving to Mexico.

Still going strong and set for his third World Cup despite a two-year spell with Inter Milan in which he struggled to get a game. Relies on stealth and superb timing to win tackles and famously went through his team's four games at the 1998 finals without giving away a free kick. Also dangerous at corners and scored twice in the 2006 qualifiers from headers.

Gamarra's regular partner at the centre of the defence, playing in all but three of the 18 qualifying matches. Began his career as a midfielder, where he played at the 2002 World Cup. Joined River Plate at the start of this year after an unhappy time with Brazil's Atletico Mineiro.

Naturally a central defender, the former under-20 international has been regularly played at left-back for his country. His career has also taken him to Perugia, Cosenza and Vicenza in Italy and Lanus in Argentina.

A natural left-back, Nunez replaced Da Silva in the last three games of the qualifying campaign. Had an unhappy time last year at Racing Club, where he was suspended for ironically applauding the crowd after they jeered him. Began with Cerro Porteno and has also played for Banfield and Arsenal in Argentina.

Played in the team which won the Olympic silver medal in Athens in 2004 and has recently been making appearances at senior level. His full debut came in the Copa America match against Brazil in 2004 when Paraguay pulled off a shock 2-1 win. Played in four qualifiers. Joined Santos in January and helped them to win the Paulista championship in April.

Left-sided midfielder or defender, he played during the early part of the World Cup qualifying campaign but was then plagued by injury. Returned to the side for the four-team tournament in Iran in November.

Defensive midfielder whose career has been hampered by injuries. Played in the first five qualifiers before a knee injury forced him out for six months. Forced to compete with Edgar Barreto for a place on his return.

One of Paraguay's revelations, he was snapped up by NEC Nijmegen from Cerro Porteno as a 19-year-old and played in the silver-medal winning team at the Athens Olympics. He was then promoted to the senior side and given several starts towards the end of the qualifiers.

Likes to play on the right-hand side of midfield. Became the English premier league's first Paraguayan player when he moved to Newcastle in 1999 but injuries prevented him from settling and he joined Mexico's UAG in 2001. Made his debut against Mexico in April 1999. Played a key role in Internacional's unsuccessful challenge for the Brazilian championship last year before moving to Argentina.

Known as "The Bull", Acuna was Paraguay's playmaker at the 1998 and 2002 World Cups. He then spent nearly three years out of the team before being recalled for the crucial match at home to Argentina in September. Now playing a more holding role, he had an excellent game in a 1-0 win and has kept his place. Born in Argentina of Paraguayan parents, he made his debut in the 1993 Copa America. Played for Boca Juniors in Argentina and he spent five seasons with Real Zaragoza.

All-round midfielder, he does his defensive duties well and his pace, passing and strength in the air make him an asset in attack. Played for Porto before joining Reggina and at one stage attracted the attention of Barcelona.

Already playing regularly for Olimpia at the age of 18, Montiel shows enormous promise and is especially dangerous at free kicks. Made his debut when he came on as a substitute in the 1-0 win over Venezuela last year.

Made his debut in the friendly away to Ecuador last year and has impressed coach Anibal Ruiz. Also played in the final two qualifiers against Venezuela and Colombia.

Raised at Cerro Porteno where he became the playmaker, the left-footed Dos Santos played at last year's Copa America. After making sporadic appearances as a substitute, he started in all of Paraguay's last three qualifiers and looked impressive. Elegant and a clinical finisher, he has been signed by Bayern Munich who see him as a possible replacement for the departed Michael Ballack.

Beanpole striker but despite his lanky build has excellent control on the ground. Spearheaded the attack four years ago and is expected to have recovered in time after suffering knee ligament damage in a Bundesliga match in October.

Bayern snapped him up as an 18-year-old after a stunning first season with Olimpia.

One of Paraguay's most important recent finds, Haedo Valdez was signed by Werder Bremen in 2001 from amateur club Atletico Tembetary without having played a professional game in his own country. Scored the goal against Venezuela which clinched Paraguay's place at the finals and likely to partner Santa Cruz in attack if the Bayern Munich player is fit.

Out-and-out centre forward who broke the Mexican championship scoring record when he hit a remarkable 36 goals in 25 games in helping Toluca to win the 2001-2 Apertura title. Now in the twilight of his career, he began the qualifiers as Santa Cruz's striking partner, hitting a hat-trick in the 4-1 win over Uruguay, but is used more as a substitute. Has failed to live up to expectations since joining San Lorenzo.

Cabanas has enjoyed a good scoring record in Chile and Mexican club football despite playing for modest provincial clubs in both -- Audax Italiano and Chiapas respectively. Plenty of pace and ability on the ball, though his work-rate is sometimes questioned.

An enigma, Cuevas's dribbling ability and shooting make him a huge asset, yet he has rarely been able to hold down a first-team place. His two goals against Slovenia allowed Paraguay to qualify for the last 16 in 2002 but he still went back to the bench. After spending five seasons with River Plate, he moved to China for a year before transferring to Mexico. 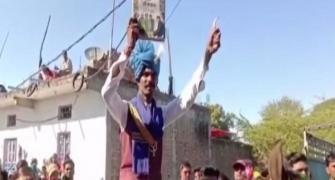