Glimpses of brilliance in the run-up to the Athens Olympics notwithstanding, the Indian badminton contingent will have to come up with something extraordinary if it intends to do any better than return home with the 'also ran' tag.

An 18-month qualification campaign till April 31 this year saw three players -- national women's champion Aparna Popat, Abhinn Shyam Gupta and Nikhil Kanetkar -- make it to the Olympics. But the writing on the wall is clear for the trio even before the start of the event.

The best-ever performance by an Indian in badminton, introduced in the Olympics in 1992, is the third round by former All England champion Pullela Gopichand at Sydney in 2000. If the three participants have to reach even that stage, they will have to stretch themselves to the limit right from the start.

Badminton over the years has been dominated by Asian powerhouses China, Korea, Thailand and Indonesia, with Denmark providing the only hope for the Europeans. This fact is emphasized in the qualification for the Games as China have the highest number of berths, 13, for any nation followed by Korea and Thailand. 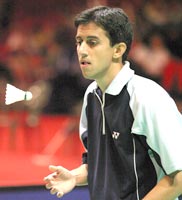 The Indians, however, had to be at the mercy of other national associations for two of the three berths since only Popat got a direct entry when the first list of qualifiers was declared on May 1.

Kanetkar knows how difficult it would be to even cross the first round at Athens but vows to put in everything to get the best result from what he terms is "a chance of a lifetime".

"Even qualifying for Olympics was difficult. But now that I have made the cut I will surely give my best."

He also exuded confidence, saying knowing about the qualification so late would not have any effect on his performance since he was anticipating it to happen and had been training hard with the other two for the last three months.

The 25-year-old southpaw had missed out on a berth at Sydney as he was sixth in the wait list but could not make the cut as only four players from the original list withdrew.

The Games are once again most likely to be dominated by the Chinese, who have been given top billings in three of the five categories.

The fact that they have not selected World champion Xia Xuanze in the men's singles on account of "bad form" speaks volumes of their team's strength. The Chinese girls also take the top three spots in the seeding list. 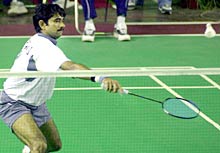 Gupta, placed second in the waitlist, received a berth when a couple of players opted out while Kanetkar, who was fifth, received the invitation only when Canada decided not to send its two qualified players for the event, three days before the deadline for confirming the final participants.

This also means that it will be the biggest Indian contingent after the 1992 Barcelona Games, where Vimal Kumar, Madhumita Bisht and Dipankar Bhattacharya represented the country.

Bisht and Bhattacharya made it to the second round then. But in the 1996 Atlanta Olympics, Bhattacharya and P V V Lakshmi could not even cross the first hurdle.

Even Popat, who also represented India in the 2000 Sydney Olympics, had to return disappointed after losing in the first round to Kelly Morgan of Wales.

While Popat has maintained her place in the World's top 30, Gupta proved his giant-killing prowess when he defeated former World No. 1 Roslin Hashim of Malaysia at the German Open last year.

He went on to win the Mauritius Open, defeating compatriot Kanetkar, while the latter emerged triumphant at the Toulouse Open in France to win his first major international title earlier this year. 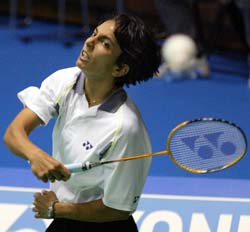 Going by their past records, they have it in them to register an upset or two, which may open the doors for the improbable in the 32-player event.

Even though all this appears promising, the most worrying factor is lack of consistency of the players that has affected their world rankings and could see them face the top players early at Athens.

Popat admits that it would not be easy at the Olympics but she is confident of a better show than her previous attempt, where inexperience and a three-month ban for taking an ubiquitous syrup for common cold played a big role in her early exit.

The Indians are further hampered by lack of physical strength as compared to the Chinese or Europeans, who concentrate on power game to dominate their opponents.

Keeping this in mind, the Indian contingent has been working hard on strength building and speed for the past three months at the SAI Centre in Bangalore under coach Ganguly Prasad and one hopes the results will be there for everyone to see when the trio takes on the world's best in the competition which begins on August 14 at the Goudi Badminton Hall.

Abhijeet Kulkarni
Source: PTI© Copyright 2021 PTI. All rights reserved. Republication or redistribution of PTI content, including by framing or similar means, is expressly prohibited without the prior written consent.
SHARE THIS STORYCOMMENT
Print this article