IMAGE: India's Priyanshu Rajawat is the other semi-finalist and will play Kaushal Dharmamer in their last four encounter on Saturday. Photograph: Odisha Open/Twitter

Kiran George upset third seed Subhankar Dey to advance to the men's singles semi-finals while in-form shuttler Malvika Bansod also cruised to the last four round in the women's event at the Odisha Open badminton tournament in Cuttack on Friday.

The unseeded Kiran eked out a hard-fought 21-16, 10-21, 21-19 win over the higher ranked Subhankar, who was the last remaining seed in the men's singles event.

The 21-year-old Indian will meet compatriot Ansal Yadav, who beat qualifier Tharun Mannepalli 21-15, 23-21, in the semi-finals on Saturday.

The other men's singles semi-final match on Saturday will be played between Priyanshu Rajawat and Kaushal Dharmamer.

Malvika, who reached the final of the Syed Modi International where she lost to PV Sindhu before defeating Saina Nehwal at the India Open earlier this month, continued to impress as she registered a 21-13, 16-21, 21-17 victory over fellow Indian Tanya Hemanth in a gruelling 58-minute quarterfinal contest.

Fifth seed Ashmita Chaliha got the better of Rhucha Sawant 21-17 21-15 to book her spot in the last four of the women's singles, where she will meet compatriot Smit Toshniwal, who came from behind to beat USA's Ishika Jaiswal 8-21, 21-9, 21-14.

In another women's singles quarter-final, Unnati Hooda handed fellow Indian Samiya Imad Farooqui a 21-10, 21-15 defeat in 26 minutes. She will lock horns with Malvika, who is ranked 87th, in the semi-final.

In the men's doubles, Vasantha Kumar and Ashith Surya will face Ravikrishna and Sankar Prasad Udaykumar in one of the semi-finals. The Sri Lankan duo of Sachin Dias and Buwaneka Goonethilleka will meet the Malaysian pair of Nur Mohd Azriyn Ayub and Lim Khim Wah in the other semi-final.

The other semi-final will be played between eighth seeded pair of Sanyogita Ghorpade and Shruti Mishra and the Indian-American duo of Srivedya Gurazada and Ishika Jaiswal. 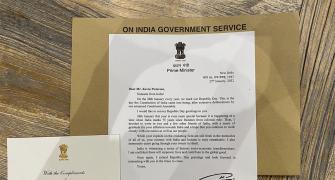 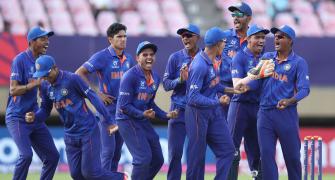 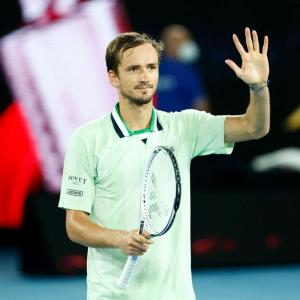