Grandmaster Parimarjan Negi blundered and went down to Sandipan Chanda from a position of strength in the penultimate round of the 14th Dubai International Open chess tournament on Monday.

Negi's loss turned out to be a big gain for Chanda as he joined the leader, Latvian Grandmaster Miezis Normunds, on 6.5 points.

The victory also ensured a maiden Woman International Master norm for the Delhi girl with a round to spare.

This is a commendable achievement considering the fact that Madhurima is only a 1900 rated player and for a WIM norm one must play like someone above 2250.

None could have imagined what transpired on Negi's board. Chanda suffered after going for unwarranted complications early in opening and Negi pounced on his chances in the queen-less middle game.

It was a near-perfect game wherein Negi simply outplayed Chanda but for the last move when he thought he was making the winning move but ended up dropping his rook for nothing.

Not only for Negi, this was a shocker for most of the spectators -- a typical case of 'chess blindness' as one Grandmaster put it.

On the top board Abhijeet Gupta could not achieve anything against Normunds and had to settle for a draw after being worse in the endgame.

Surya Shekhar Ganguly inched himself up to six points, defeating S Nitin in a keenly contested game. Gupta and Ganguly now share the third spot along with ten others.

Negi, Grandmaster G N Gopal, International Master Sahaj Grover, Lalith Babu and M Shyam Sundar are amongst those who have 5.5 points and need to win in the final round to figure among prize winners.

The Indian GM norm aspirants did not have a good day, as Vishnu Prasanna was outplayed by M R Lalith Babu and Akshayraj Kore suffered the same fate against Ghaem Maghami Ehsan of Iran.

P Shyam Nikil remained in contention for his GM norm after signing peace with Zhou Weiqi of China. But he will need a win in the final round game. 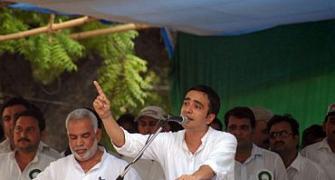 Will Jayant Chaudhary emerge as kingmaker of UP?