Michael's got the munchies 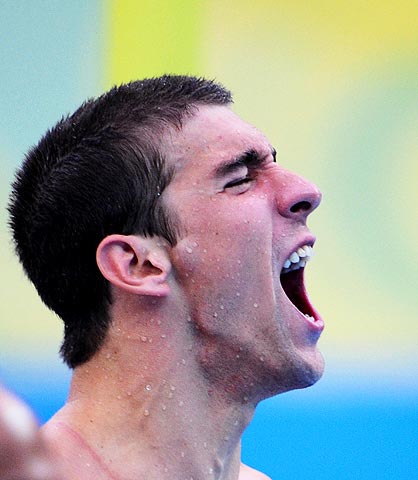 Earlier this week, we revealed how Mariah Carey dropped 20 excess pounds as she heads towards middle age: an intake of a miniscule 1000-1500 calories per day!

At the opposite end of the spectrum sits US swimmer Michael Phelps, who's won a staggering 14 Olympic gold medals. In order to fuel his body for a gruelling six-days-a-week, five-hours-a-day training regime, the 23-year-old devours a whopping 12,000 calories per day, six times the recommended intake for a normal adult male.

It's a routine that would foil even the most ambitious of spatula-wielding Indian aunties.

Breakfast: While most of us are content with some cold cereal or a few idlis, Phelps starts the day in kingly fashion: three fried-egg sandwiches loaded with all the goodies -- cheese, lettuce, tomatoes, fried onions and, of course, mayonnaise.

To wash down course one, he tosses back two cups of coffee and then ploughs through a five egg omelette and a bowl of grits (porridge of coarsely ground corn).

Though his belt must be growing tight, young Michael's by no means finished. Next up are three slices of French toast, sprinkled with confectioner's sugar, for good measure. And the coup de grace? Three chocolate chip pancakes. Yum.

Lunch: While normal humans would be out of commission for the rest of the day, Phelps's breakfast is actual dwarfed by his lunch, which seems more like an order from a catering service than an individual meal. First, he eats a whole pound (.5 kilo) of enriched pasta and two large ham and cheese sandwiches, made on white bread and slathered with mayo. To ensure a peppy afternoon, he gulps down 1,000 calories worth of energy drinks. That's 5 Red Bulls!

Dinner: You know the old saying: eat breakfast like a king, lunch like a prince and dinner like a pauper? Michael missed the memo. He eats like an emperor throughout! At dinner, he starts with yet another pound of enriched pasta, then moves on to an entire large pizza.

Feeling sleepy yet? Maybe that's why Phelps slurps down another 1,000 calories of energy drinks before calling it a night. Burrp!

Evidently, when Phelps recently told NBC that all he does is, "Eat, sleep and swim," he wasn't lying!

Finish: With 7 gold medals already earned in Beijing, if Michael Phelps was a one-man nation, he'd stand at number four in the Beijing 2008 gold medal list as of Saturday evening. Seems young he eats for an entire nation, too.