Roger Federer looked as sharp as ever in his first match following a two-month layoff as he beat Czech Radek Stepanek 6-3, 6-3 at the Madrid Open on Tuesday.

The Swiss chose an eye-catching mint-green shirt for his first match since losing to Rafa Nadal at the Indian Wells Masters in March and secured a 12th victory over Stepanek in 14 meetings.

The victory set up a possible third-round clash against friend and compatriot Stanislas Wawrinka.

Stepanek, 34, produced a late rally to break the Federer serve in the eighth game of the second set but was broken himself the next game when he sliced a forehand wide. 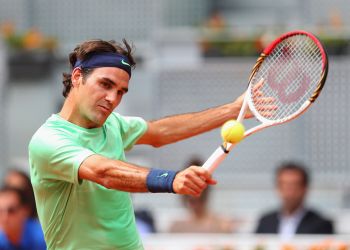 "I didn't think I played incredible, but that's not what I was expecting myself to do here, but I didn't play bad either," Federer, who was also sporting mint-green flashes on his tennis shoes, told a news conference.

"Overall, I'm very happy, because he (Stepanek) has caused me difficulties in the past," added the 31-year-old world number two, a three-times champion in Madrid.

"Today that wasn't the case and I thought I was pretty much in control."

Federer is yet to win a tournament this year but if he defends his Madrid crown he will equal John McEnroe's 77 career titles and join the American in third on the all-time ranking behind Jimmy Connors on 109 and Ivan Lendl with 94.

"Obviously I've had a very successful career, which has been amazing already. More than I ever thought I would achieve," Federer said.

"I would love to tie McEnroe at 77, no doubt about it. He was an amazing player and brought a lot to the game, like some other great champions and legends have done and paved the way for us."

World number one and top seed Novak Djokovic, who won his third title of the year at last month's Monte Carlo Masters, plays his second-round match against Grigor Dimitrov of Bulgaria in Tuesday's evening session.

© Copyright 2022 Reuters Limited. All rights reserved. Republication or redistribution of Reuters content, including by framing or similar means, is expressly prohibited without the prior written consent of Reuters. Reuters shall not be liable for any errors or delays in the content, or for any actions taken in reliance thereon.
Related News: Czech Radek Stepanek, Roger Federer, Rafa Nadal, John McEnroe, Monte Carlo Masters
COMMENT
Print this article