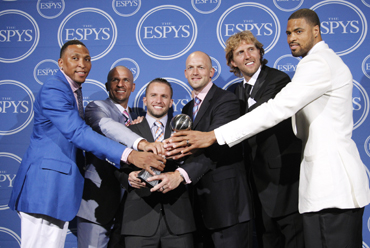 The Mavericks, who won the National Basketball Association championship over a Miami Heat team filled with superstars including LeBron James and Dwayne Wade, won the Espy for best team and Nowitzki was named best male athlete.

"If this Dallas Mavericks team proved anything, it's that good guys do win and can win and will win," said team owner Mark Cuban on stage accepting the team honor.

The win was somewhat awkward, however, because the NBA and its players are currently embroiled in a bitter contract dispute that has caused team owners to lock out players, and the two opposing groups are not talking to each other.

German-born Nowitzki, accepting his award for best male athlete, acknowledged the uncomfortable scene at the awards saying he would like to thank Cuban, but couldn't "since I can't talk to him."

Olympic and World Cup champion skier Lindsey Vonn picked up the trophy for best female athlete for the second straight year. Like others, she thanked numerous people, but then Vonn looked at pop star Justin Bieber in the audience and asked "will you take a picture with me for my Facebook page."

The Espys are given to athletes by all sports cable TV network ESPN, and annually are a top gathering for men and women in fields from professional football to skiing, auto racing and even lesser-watched games such as lacrosse. Winners are chosen by fan voting.

Host Seth Meyers got the show off to a comic start, poking fun at athletes ranging from football's Brett Favre to baseball pitcher Brian Wilson and his much talked-about, bushy black beard. "Some pitchers have goatees; Brian Wilson has a goat," joked Meyers.

© Copyright 2020 Reuters Limited. All rights reserved. Republication or redistribution of Reuters content, including by framing or similar means, is expressly prohibited without the prior written consent of Reuters. Reuters shall not be liable for any errors or delays in the content, or for any actions taken in reliance thereon.
Related News: Dirk Nowitzki, Dallas Mavericks, National Basketball Association, Espy Awards, Brian Wilson
SHARE THIS STORYCOMMENT
Print this article 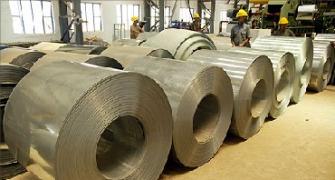 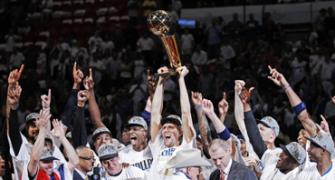