Jangra won on Individual Judge's score as the scores were locked at 34 all after four rounds of intense battle.

The other semi-final was in stark contrast as Mary Kom (51kg) thrashed Dolly Singh of West Bengal 28-3 to set up a title clash with Jangra.

In the bout between Sarita and Jangra, there was not much separating the two boxers. Both the girls opened strongly with the scores tied at 7-all after the opening two minutes of play.

The second round saw Sarita take a crucial one-point lead (11:10). Action continued in a similar vein in the third as well, with both the pugilists notching up nine points each.

Jangra Pinki managed to win the final round with eight points as opposed to Sarita's seven.

"It was a very tough fight and I was able get the decisive point in the final round, anyone could have been the winner, but I am glad that it was me," expressed an elated jangra after her bout.

Revenge will be on Mary Kom's mind when she takes on Jangra in the final of the championship tomorrow, while the Haryana boxer on the other hand would be looking to replicate her 2009 success against the world champion.

In the light flyweight category, Youth World and National Champion Sarjubala Devi of Manipur, continued her winning spree as she boxed her way to the finals, ousting Mamta from Haryana.

Sarjubala dominated proceeding from the word go and advanced to the finals with a 25:14 win on points.

She will now lock horns with local girl and National Games silver medallist Krishna Thapa who plundered Jahnavi Gogoi in a one-sided affair 34:17.

Neetu Chahal of Haryana caused another upset as she beat 2008 Asian Championship gold medallist Nagisetty Usha of the Railways in the lightweight division.

Neetu, a bronze medallist at the 2011 Asian Cup boxing tournament, warded off a stiff challenge from the five-time national champion to register a 12:9 victory on points. She will now clash with Preeti Beniwal of the IABF team. 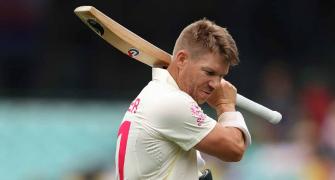