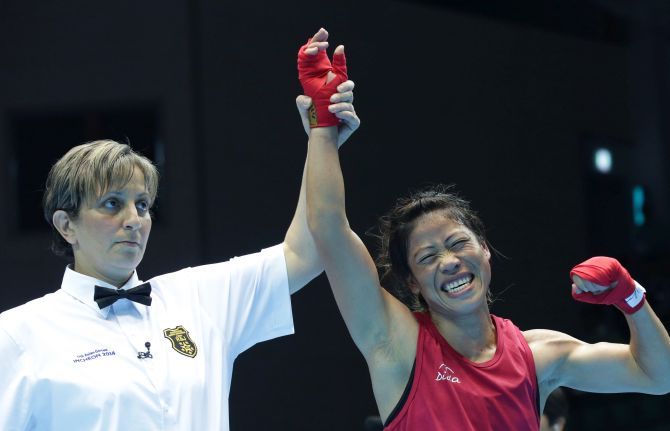 Pleasantly surprised after Barack Obama mentioned her name in his speech on Indian achievers, Indian woman boxer M C Mary Kom said she was happy to know that the US President acknowledged her performances.

Addressing a Town Hall event at the Siri Fort auditorium on the third and final day of his visit to India, Obama lauded Indian sporting heroes Mary Kom and legendary sprinter Milkha Singh among others.

In Delhi to promote the Tourism Authority of Thailand, after being named Thai boxing ambassador, Mary Kom said she never expected the mention from the leader.

"I am thankful to him for mentioning my name. He acknowledged my performances over the years. It was surprising because he could have taken anybody's name. I am feeling very proud," the five-time World champion and reigning Asian Games gold medallist said.

"If I meet him ever, I will definitely thank him because it is very encouraging," she added, with a grin.

The mother-of-three from Manipur, who is currently on the road to recovery from a shoulder injury, said she has started training but hasn't yet decided on a comeback tournament.

"I am training, but as of now I haven't decided on which tournament to compete because I want to wait for a tournament which would test me. I would like to be part of a tough draw," she said.

Quizzed about Thai boxing, which involves the use of the knees and elbows as well, she said she would recommend the sport to Indian women.

"We all know crime is rising, and women can learn something like Thai boxing to counter any attack. It will be good for them," she said.