Great Britain's Richard Nerurkar, who won the IAAF World Cup marathon in 1993 in San Sebastian and the Hamburg Marathon, feels the climate will play a big part in the Mumbai Marathon, to be run on Sunday, February 15.

The former British number one marathoner, who is on his fourth visit to India and will take part in the 7 kms Dream Run, feels Mumbai's climate is not ideal for the arduous run and the course chalked out is not the best in the world. 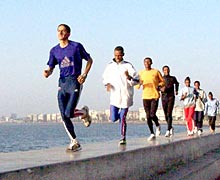 "If you want to get good timings then one should take out all the hills from the course," said Nerurkar, who retired from professional running just before the Sydney Olympics.

He rated the Ethiopians as favourites to win the event, one of the reasons being he coaches them.

So what does it take to run a marathon?

"The physical aspect is the most important part of training. Then comes the mental toughness which separates the 1-2-3 at the finish. Diet is a small part of the training," he said, addressing a press conference at the Oberoi Towers in Mumbai on Thursday.

Belai, a father of four, is among Ethiopia's eight top athletes who will be running in Sunday's marathon. He said he runs four marathons a year and has been running since the last 11 years.

Ian Radbrooke, who is coordinator for the elite team of athletes joining the event, was of the opinion that Berlin has the best marathon course.

"New York is one of the worst. London and Mumbai are the same," he said, adding the ideal temperature for a marathon is between 8 and 15 degrees celsius.

"But as it [the Mumbai marathon] is going to be held early in the morning, the athletes will not be bothered by the heat."