From ordinary police on the beat to the shadows of Britain's security establishment, the sighs of relief are almost audible.

Terrorism is an act of theatre, an adage goes, but thanks to firm and discreet security at London 2012, would-be attackers must now wait four more years until Rio de Janeiro for their next chance to exploit the world's biggest stage.

The absence of serious incidents at Britain's Games represents a success for the state and its counter-terrorism allies and a profound failure for al Qaeda, the militant network widely seen as most interested in attempting an attack.

The fact that it was done with a light touch, with largely unarmed officers and soldiers on display, with no overt paramilitary element, has added lustre to Britain's achievement, the government and some independent commentators say.

Some drew a favourable comparison with a more visible police presence in Beijing four years ago that included the stationing of an armoured personnel carrier outside the main media centre. 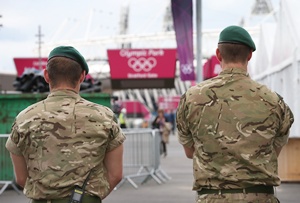 London's civil libertarian critics looked askance at the organisers' intensive use of closed circuit television surveillance, a technology that Britain's influential security industry is keen to promote internationally, and the presumed interception of most electronic communications at the Games.

Defenders of the security operation, however, argued the stakes were too high to shun the use of these methods, many of them legacies from the conflict in Northern Ireland.

After all, they said, London was seen to be a top target. It was the first Games hosted by a prominent partner in the US-led coalition formed after al Qaeda's September 11 attacks of 2001.

The city is believed to be home to dozens if not hundreds of committed al Qaeda sympathisers: Britain remains an open society affording plenty of scope for orchestrating plots, with none of the all-encompassing security apparatus of communist Beijing.

And attackers have had seven years to prepare since the Games were first awarded to London on July 6, 2005.

Al Qaeda is likely to have wanted to emulate the 7/7 suicide bomb attacks on the London transport system by young British Islamists the very next day that killed 52 people. That attack remains al Qaeda's last successful strike in the West.

"It was a golden opportunity for al Qaeda," said Noman Benotman, a senior analyst at Britain's Quilliam Foundation think tank. "But what happened was that al Qaeda failed to organise and execute an incident. They had plenty of time to plan and prepare, but they just could not manage it."

In the event, he said, al Qaeda's core leadership has been so weakened by years of relentless US drone attacks in its Asian heartlands that it must rely on untrained, self-directed "lone wolf" enthusiasts whose success rate is low.

The security operation, led by the police but supported by the military and emergency services, combined everything from surface-to-air missiles to airport-style scanners and naval patrols. The vast majority of police were unarmed.

For all the pre-Games fuss over anti-aircraft batteries on apartment blocks, when the Olympics were over visitors praised the operation as unobtrusive but effective.

"You realise they are there, but it's not something you kind of look over your shoulder at all the time," said American Todd Crowell from North Carolina, strolling though the Olympic Park.

"It's kind of been comforting but not oppressive," said his wife Sara.

Policing inside the Olympic park itself, in a low-income district of east London, was low-key, with armed, uniformed police mainly visible at sensitive places such as rail stations.

"I feel very secure," said veteran Israeli judoka Ariel Zeevi, 35. "There are the security arrangements of the English people, and of the Olympic village and there are the Israeli security guards who are very professional and very nice also."

Security matters to Israelis, whose memories remain raw of the Palestinian attack on the Munich Games of 1972 -- still by far the deadliest security breach in the movement's history.

Outside the park, policing was more apparent, with uniformed, armed officers, private security officials and teams of plain-clothes armed police monitoring the ebb and flow of tourists and spectators.

Canadian Peter Myers, 61, from New Brunswick province, said he thought the security had gone very smoothly: "It's faster than most airports and I haven't seen anyone carrying guns," he said. "It's very relaxed for something that is supposed to be secure. I mean, it is secure, but you don't notice it."

The potential for a variety of problems, from protests to crime, was always considerable, organisers said.

The main site of the Games was in the London borough of Newham, a low income area with disproportionately high levels of gun and knife crime, gang violence and robbery from vehicles. Last year London and several other cities suffered their most extensive rioting for three decades.

There was additional sensitivity because the event was the 40th anniversary of the Munich massacre when 11 Israeli Olympic team members were killed.

As it turned out, the things that did not go right had nothing to do with the Middle East or violent crime.

Security firm G4S admitted that it could not provide enough guards for Olympic venues, meaning thousands of extra soldiers had to be deployed at the last minute, despite its multi-million-dollar contract from the government.

And there were some scattered incidents of what some critics suggested was an excess of zeal.

On the Games' opening night, police arrested 182 cycling activists taking part in a monthly mass ride despite warnings to avoid road lanes that had been reserved for Games traffic. The mass ride has taken place in the capital on the last Friday of the month for the past 18 years.

Barrie Houlihan, professor of sport policy at Loughborough University, said security had "been smooth and unobtrusive".

"The security has been as light touch as it's possible to be," he said. "But it's a security operation that was designed to tackle the possible not the probable.

"And so longer term there's a concern about the impact on UK cultural attitudes to intense security. There may be an inadvertent legacy of the Olympic-style security, in that it tends to linger in the security practices of the host country."

Intense use of closed circuit television at the Games, a technology Britons are accustomed to, "ratchets up the level of tolerance for these practices", Houlihan said. "And yet we know that for many people what makes cities attractive places to live in is their anonymity, and this practice tends to limit that."

While al Qaeda may not have landed a blow on the Games, its 2001 attacks certainly stimulated security spending on them.

The security budget was more than 1 billion pounds out of an overall total for the Games of 9.3 billion. That is three times less per athlete than the Beijing Games, according to a study by Houlihan and his Loughborough colleague Richard Giulianotti, but more than 10 times the amount spent per athlete at Sydney, the last Games before the 2001 attacks.

In the end, were any plots, by groups or solo operators, actually thwarted? Or did potential attackers simply choose not to try, deterred by the security operation?

In one case closely watched by Olympics officials, a Spanish judge charged two Chechen men on August 5 with being members of a terrorist organisation and possessing explosives, following their arrest in what Spain called one of the most important international operations against al Qaeda.

A third suspect, a Turkish engineer also charged with possession of explosives, raised suspicions when he asked his powered hang-glider instructor if he could take aerial photos of a shopping centre in the British Iberian outpost of Gibraltar, El Pais newspaper reported.

Police declined to discuss the case, adding only that they were confident they could cope with any sort of attack.

In another development that drew attention, an August 2 statement purporting to come from al Qaeda's Yemen-based wing appealed to "supporters of jihad" in the West: "This is your day," it said. "Meet the enemy and kill them and harm them."

The call by an unnamed al Qaeda representative on behalf of a "Battalion of Horrors" did not specifically mention the Olympics. In the event, the call appears not to have been answered, and the fact it was made at all suggests a reliance on solo sympathisers and a lack of organised cells in the West.

"The resort to lone wolves is a reaction to the increased capability of the security services to shut down networks and cells," said Pepe Egger, head of Western European Forecasting at the British-based Exclusive Analysis risk consultancy.

Several counter-terrorism analysts suspect that many in the international militant Islamist community have simply not been focused on the Olympics, even if some of them have made sporadic threats against the Games over the past year.

Egger said a survey of social media and online forums used by militant groups during the Games showed that they were focused on other topics such as events in Syria, Afghanistan, Yemen, Mali, Iraq, and the situation of Muslims in Burma.

"In terms of topics attracting forum attention," he said. "The Olympics is very far down the list."

© Copyright 2020 Reuters Limited. All rights reserved. Republication or redistribution of Reuters content, including by framing or similar means, is expressly prohibited without the prior written consent of Reuters. Reuters shall not be liable for any errors or delays in the content, or for any actions taken in reliance thereon.
Related News: Al Qaeda, London, Barrie Houlihan, Britain, Pepe Egger
SHARE THIS STORYCOMMENT
Print this article
US never listens to us, complains Pakistan
'US-Pak relationship transactional, not built on goodwill' Why Pune is so VULNERABLE to terrorism