New low for Indian hockey at the Olympics

Memories of the bottom-place finish at the 1986 World Cup here returned to haunt the Indian hockey team, who will now have to lift their game to avert the wooden spoon at the London Olympics.

India, who play Belgium in their final Pool B fixture on Tuesday, will finish last in the group irrespective of the result of this match and will then have to play the bottom-place team in the other pool in the playoff for the 11th and 12th positions.

India are the only team not to have secured a point so far in the ongoing Olympic Games hockey competition, while all others in their group have four points or more. Even an Indian victory over Belgium, who are determined to move up the rankings, will leave India at the bottom.

"This is a reality we have to face now," says India's national hockey coach Michael Nobbs.

Nobbs said the players had worked hard and were fit to take on the top teams "but they have let themselves, the team, their supporters and the country down".

"It is not a God-given right to play for your country. It is an honour you earn through hard work," said Nobbs. "If they cannot play, we have to move on."

"Perhaps this is what was required to clean the slate," he said, expressing his disgust at the manner in which the Indian team had crashed to four successive defeats. Not only the defeats, it was the manner in which India played that has disappointed it supporters, who turned up in large numbers at every match at these Games, only to return dejected by the poor show of the team.

London was the venue where the hockey team won independent India's first sporting honour by winning the gold medal at the 1948 Olympics.

Balbir Singh, the centre-forward who won three Olympic gold medals as a member of the Indian teams in 1948, 1952 and 1956 editions, came to the Olympic hockey arena to support the Indian team against South Korea, but like thousands of other supporters left the venue disappointed at India's performance.

It was not the glory of the 1948 Olympic gold medal, but the dejection of the 1986 World Cup at the British capital that has arrived on the horizon.

Under the new format that is being used at the Olympic Games, teams that fail to make the semifinals will play just one more match to decide their final standing in the tournament.

India will finish below their number 10 ranking as they will feature in the play-off for the last two spots (11th and 12th).

This will be the lowest position in the Olympics for eight-time gold medallists India, whose previous lowest was the eighth-place finish at the 1996 Atlanta Games.

India did not feature in the Beijing Olympic Games as they lost to Great Britain in the qualifier, which left them out of the top 12 teams.

Captain Bharat Chetri said he was hopeful of the Indian team picking up for the last two games -- the pool match against Belgium and the play-off for the 11th and 12th spots.

"I hope we can improve. We must put the four losses behind us and play well as a team to salvage something from the last two matches," Chetri said, adding that India had paid a heavy price for missing chances in their previous outings.

"We're a young team, most of the players did not have the experience of a big event like the Olympic Games," Chetri said.

Belgium defeated India in the final of last year's Champions Challenge in Johannesburg, and are looking to repeat that performance. 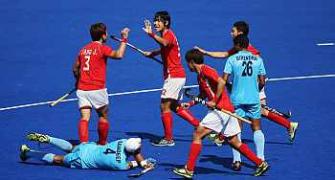 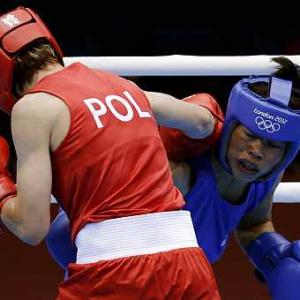