Discus thrower Krishna Poonia is satisfied with her seventh place finish at the London Games and aims to do better in the next Olympics in Brazil.

Poonia hurled the discus to a distance of 63.62m, more than a metre below her personal as well season's best of 64.76m, but she said she was not disappointed with her performance.

"It was a disaster in Beijing in 2008 and so I am satisfied with my seventh-place finish in London. It was a tough field and I had beaten the likes of 2008 Games champion (Stephanie Brown Trafton of United States) and former World champion Dani Samuels (of Australia)," Poonia said. She failed to qualify for the final round in Beijing four years ago, finishing 10th in one of the groups in the qualification round.

"Every athlete wants to win an Olympic medal and I will continue to strive for it. Now I will take a break and then start training. My aim now is to do well in the 2014 Glasgow Commonwealth Games and the 2016 Olympic Games in Brazil," said the 30-year-old Poonia.

The 2010 Commonwealth Games gold medallist said failing to get a medal in the London Olympics will only spur her to do well in upcoming events.

"It happens in big events. You do well in some big events and fail in others. It happens. See Darya Pishchalnikova (of Russia), she was 11th in the World Championships last year and now she has won a silver in London. So I consider the seventh-place finish as an achievement which will give me confidence," said Poonia.

Poonia looked subdued during the women's discus throw event at the showpiece Olympic Stadium in London and had just four legitimate throws, fouling in the other two.

Asked why she was subdued, she said it was because she had to throw last in the 12-athlete field.

"I had to do throw 12th and last and I don't know why it was so. I think it was done in a random manner but I was not used to do that. I used to start early in most of the big events. I would have loved to throw a bit early in the order. But that did not have any effect on my performance," she said.

She rued not bettering her personal best of 64.76m -- also the national record -- which she set in May in the United States in the build-up to the Olympics.

"I would have loved to cross my personal best but it did not happen. Olympics is the biggest event and it happens," she said.

Her husband and coach Virender said even former World champion Dani Samuels, who finished last in the 12-woman field, congratulated Poonia her on her performance.

"Dani came to meet Krishna and praised her for her performance. She apologised for challenging her for a discus throw contest after Krishna won gold in the 2010 Delhi Commonwealth Games," said Virender.

The 2009 World Championship winner Samuels had challenged Poonia for a unique US $20,000 winner-takes-all discus throw contest between the two after the Indian won the gold in the 2010 Delhi Commonwealth Games, which though had never happened. 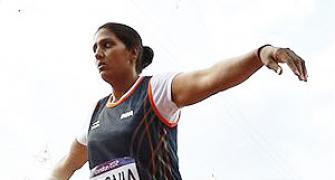 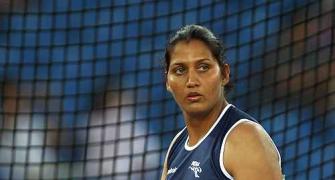 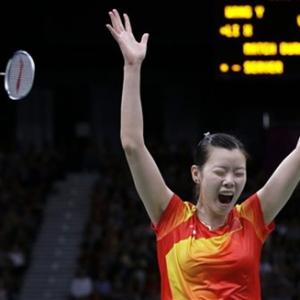 PHOTOS: Gold winners on Day 8 of the Games