Narang won the bronze medal in the 10 metre Air Rifle after Abhinav Bindra, the Beijing Olympics gold medallist?in the event, failed miserably in the qualifying rounds.

He scored 103.1 in a gripping ten-shot finals for an aggregate of 701.1 after scoring 598 in the qualifying round, in which he also placed third. 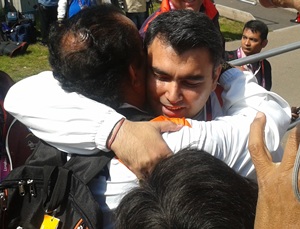 The gold was won by Romania's Moldoveanu Alin George, who tallied 702.1, that included 103.1 in the final, to upset world No?1 Niccolo Campriani of Italy, who finished second with 701.5, at the Royal Artillery Barracks.

However, he slipped a bit and had to fight for the bronze medal with China's Wang Tao, who finished fourth with 700.4.

After returning poor scores of 9.9 and 9.5 in the seventh and eighth attempts, Narang pulled up his socks to seal the bronze with impressive scores of 10.3 and 10.7.

Narang's compatriot and defending champion?Bindra, however, suffered a shocking exit with a dismal show in the preliminaries, in which he placed 16th out of 47 contestants with a score of 594 out of 600.

Image: Gagan Narang gets a hug from his coach after clinching the bronze medal.

Copyright © 2022 The Associated Press. All rights reserved. The information contained in the AP News report may not be published, broadcast, rewritten or redistributed without the prior written authority of The Associated Press.
Related News: Gagan Narang, Abhinav Bindra, Moldoveanu Alin George, Royal Artillery Barracks, Niccolo Campriani
COMMENT
Print this article 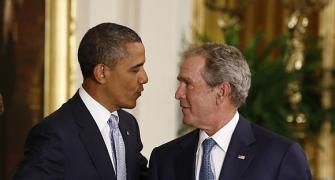 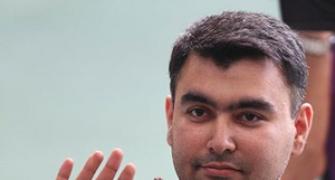 Lucknow medical college may get back 'King George' tag