It was expected to be a one-sided affair and it turned out to be one as favourites India routed minnows Singapore 15-1 to mark a grand opening to their campaign in the men's hockey Olympic qualification tournament in New Delhi, on Saturday.

The 41st ranked Singaporeans, who came in as a late replacement for the United States and comprise mostly university students with little experience in international hockey, were no match for the eight-time Olympic champions India as they home team scored goals at will at the floodlit Major Dhyan Chand National Stadium.

It was a rare exhibition of goal-scoring prowess from the Indians, ranked 10th in the world and top seeded in the tournament, as they found the opposition net six times in the first half and nine times after the change of ends.

Elifh Enrico Marican(39th) was the lone goal scorer for Singapore. 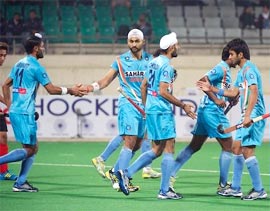 Inspite of the massive win, penalty corner conversion remains a major concern for India as the hosts managed to convert just one through Sandeep from the six they earned against Singapore.

The Indians put the young Singapore defence under pressure from the word go and created scoring chances at will.

It took the Indians just 10 minutes to surge ahead when Chandi scored with a slap shot from top of the box after missing the first attempt.

The rookie Singapore defence looked clueless against India's relentless attack as the home team scored their second goal a minute later through Sardara and then Shivendra tapped home a lose ball in the 18th minute to take a 3-0 lead.

Chandi scored his second of the match three minutes later and then Danish registered his name in the scoresheet following a one-two with Sarvanjit after Malaysia custodian Ru Yi Tan denied Sandeep from India's second penalty corner.

Six minutes from the break, Shivendra scored his second goal of the match after some fine team-work from Yuvraj Walmiki and S K Uthappa to go into the breather with a commanding 6-0 lead.

There was no change of script in the second period as well as the Indians maintained their continuous assault on the Singapore goal and scored as many as nine goals, much to the delight of the sparse crowd present at the stadium.

However, the Indians were in for a small shock just after the resumption of play as Singapore pulled one back through Muhammad Baquir Asali, courtesy a defensive lapse from Birendra Lakra.

That was the only silver lining in Singapore's game as from there on it was all India who scored goals at the blink of eye in the second half to complete a morale-boosting win.

India will play another minnows Italy in their second match on Sunday.