'He will always be an enigma.'
'But it's because of players like him that some people still watch doubles matches.'
Dhruv Munjal hails modern tennis' ageless wonder. 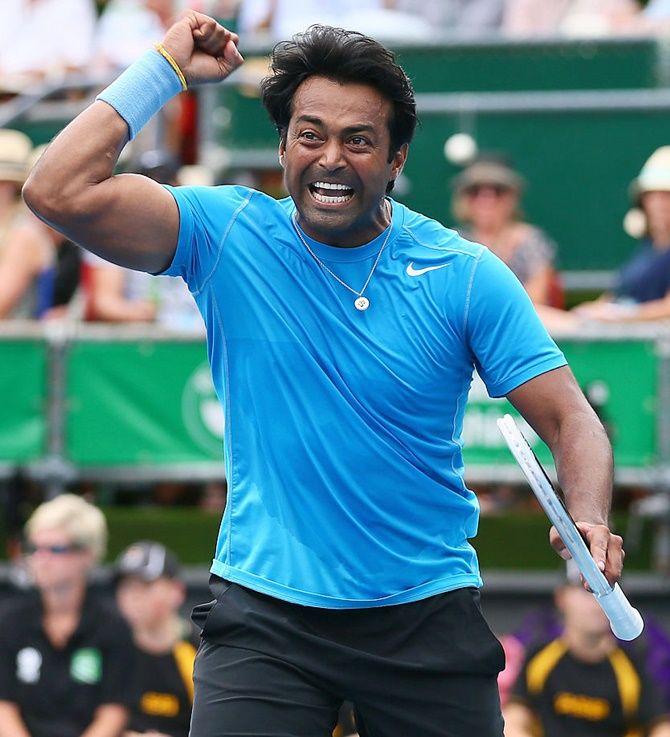 The scene of perhaps Leander Paes' greatest tennis triumph was not the immaculate green grass of Wimbledon or the grimy clay of Roland Garros. It was the most unlikely venue: The Cricket Club of India in Mumbai.

It was April 2006 and India was playing Pakistan in the Davis Cup for the first time in 33 years. Once a shining colonial sporting landmark but now a largely unused cricket space, a part of the Brabourne Stadium was cordoned off and converted into a makeshift tennis court.

That very passion is what still keeps Paes going. That unending desire to win.

By the third afternoon, the tie was delicately poised at 2-2. Just the previous day, Paes and Mahesh Bhupathi had dispatched Jalil Khan and Asim Shafik in straight sets in the men's doubles. Before the deciding rubber, Paes, the team captain, had a decision to make.

Rohan Bopanna had meekly capitulated against Aisam Qureshi in the second singles match. Moments before the decider, Paes -- even as the others argued furiously -- decided to do the unthinkable: Pick himself ahead of Bopanna, India's highest ranked singles player.

Paes, 33 at the time, had spent years honing his skills as a dexterous craftsman of the doubles game. He probably hadn't played this significant a singles match since famously destroying Pete Sampras in Newport in 1998. 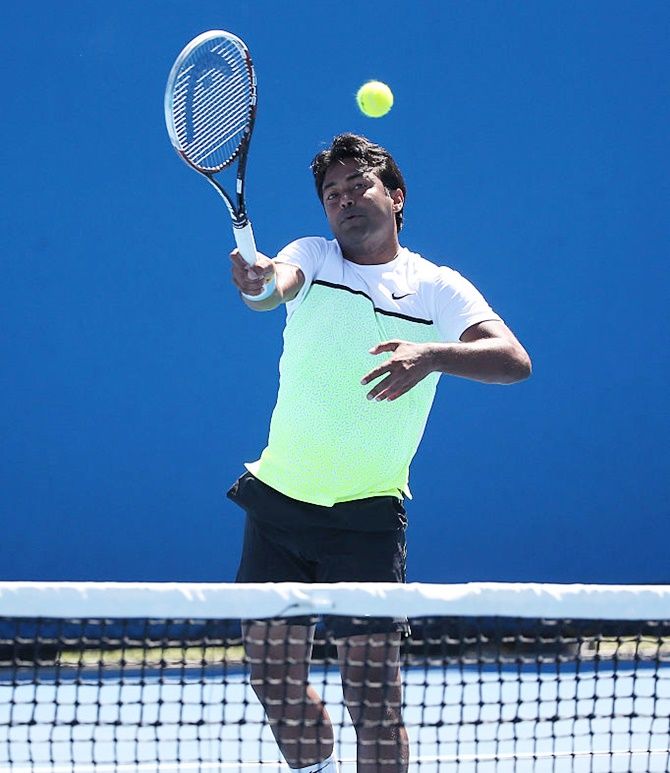 IMAGE: 'Maybe we don't celebrate him as much as we should.' Photograph: Atsushi Tomura/Getty Images

Against Aqeel Khan, Paes' performance was one that boggles the mind even today. Laid low by cramps, Paes was unable to move by the fourth set. The Mumbai heat that afternoon was so punishing that Qureshi had to be rushed to hospital after his win against Prakash Amritraj earlier in the day.

Hours later, Qureshi was back and watching wizardry unfold before his very eyes -- Paes, despite struggling terribly, was putting Khan firmly in his place. By the time this whopping ballet reached its conclusion, Paes was deeply overcome by emotion. He sobbed uncontrollably as he went around the stadium with Tricolour in hand. That very passion is what still keeps Paes going. That unending desire to win.

'His longevity amazes me. In the modern era, it is almost impossible to keep winning major titles at this age.'

On Friday, June 17, Paes turned 43. A little under two months from now, he will make a record seventh appearance at the Olympic Games. "It's a dream come true. It is another opportunity to represent the country," he says. "Gold is the obvious aim."

At the French Open last month, Paes, partnering Martina Hingis, won his 10th mixed doubles Grand Slam title -- equalling Martina Navratilova for the most number of mixed doubles majors in the process. Last year, he became the oldest man to win a Grand Slam in the Open era. "His longevity amazes me. In the modern era, it is almost impossible to keep winning major titles at this age," says a former player. "And I don't see any sign of him stopping."

It is often easy to overstate Paes' greatness. Eighteen Grand Slams and counting -- a remarkable achievement that even in a country blessed with mighty tennis pedigree would be met with downright exultation. In India though, Paes is sometimes taken for granted.

A former Indian Davis Cupper explains: "Maybe we don't celebrate him as much as we should. He has had his problems with the administration, but that doesn't take anything away from his achievements."

Andre Agassi, in his autobiography, Open, described Paes as one of the finest volleyers he had ever seen. Agassi called Paes' style of play 'strange', alluding to the way he changed his game during the course of a match.

That strangeness is still intensely embedded in the Paes repertoire. The modern-day doubles game -- on the men's side at least -- is a disturbing mix of brawn and power; guile and touch are fast evaporating.

There are some who refuse to alter with the times due to their aversion to change. Others, such as Paes, swear by their methods because they feel that is the best way out; they don't adapt only because they have to.

Paes is one of those charming old-timers who continue to bedazzle with skills that are quickly becoming worryingly extinct. "He will always be an enigma. But it's because of players like him that some people still end up watching doubles matches," says a former Indian Davis Cup captain. 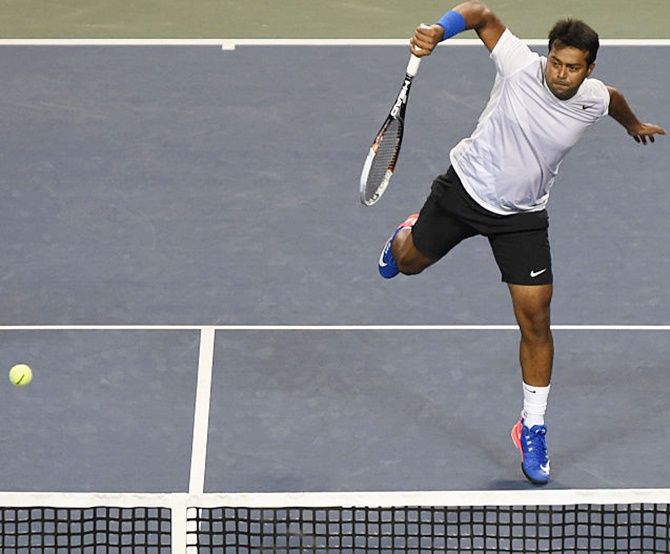 IMAGE: Andre Agassi, in his autobiography, Open, described Leander as one of the finest volleyers he had ever seen. Agassi called Paes' style of play 'strange', alluding to the way he changed his game during the course of a match. Photograph: Michael Dodge/Getty Images

Paes still cuts out opponents' groundstrokes at the net with the same ferocity and untainted grace that he did 20 years ago.

At times, his deftness reminds you of the great Ilie Nastase -- minus the humourous antics though. Paes says that he is targeting 20 major titles. "I love chasing history. I think 20 Slams is a definite possibility."

For someone who is a not a big server and moves only languidly, Paes seems to have mastered the art of winning matches purely on the basis of touch and match craft. His fitness, despite the slight paunch, helps him get through most matches.

'I love chasing history. I think 20 Slams is a definite possibility.'

Perhaps his true greatness lies in his ability to win major titles despite winning partnering myriad partners over the years. Most great doubles players over the last few decades have only played in pairs -- Todd Woodbridge/Mark Woodforde and Bob/Mike Bryan being prime examples.

Paes, however, seems to have struck an uncanny on-court rapport with every player he has played with -- a long list that includes Bhupathi, Martin Damm, Lukas Dlouhy, Radek Stepanek, Cara Black, and now, Hingis.

Even as he remains one of Indian sports' evergreen poster boys, his success elsewhere has been met with a tinge of tartness. Yesteryear star Vijay Amritraj feels that Paes is unnecessarily extending his career. "Doubles is of no interest at all. Paes is well past his prime," he says. "I don't know what is the need for him to prolong his career."

But Paes remains upbeat as ever. Preparations for the Olympics are slowly gathering pace and Paes seems hopeful of ensuring a repeat of his performance from Atlanta 1996 -- where he won a bronze in the men's singles.

The fact that a 43 year old is one of India's main medal hopefuls at Rio is sad reflection of the state of tennis in the country, but a huge testament to the man's implacable desire to compete.

More history may be on its way. 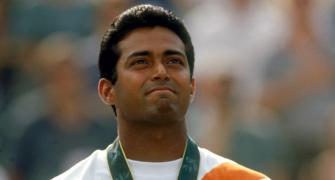 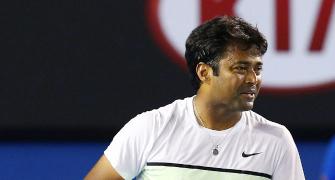 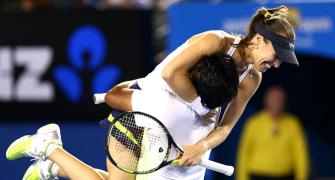 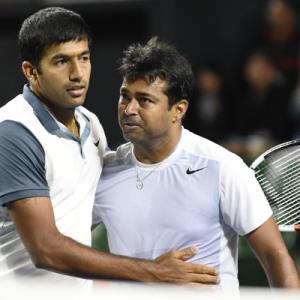 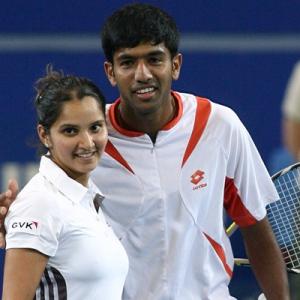