Lahiri finishes strongly to rise to fourth at Queen's Cup

Anirban Lahiri gave himself a chance to bag his first Asian Tour outside India with an electric finish that saw him card three birdies in the last four holes on the third day of the $312,000 Queen's Cup in Samui on Saturday.

Lahiri, who has won three Asian Tour titles at home and all on the Delhi Golf Club, carded a second straight four-under 67 to move to eight-under 205 and in fourth place.

Rahil Gangjee, the only other Indian to make the cut, carded 70 and was lying 30th at one-over 214. Gangjee started with a double bogey and then had three birdies on second, sixth and eighth.

Lahiri birdied second and seventh and then dropped a shot on 10th, before he birdied the 15th, 17th and 18th. 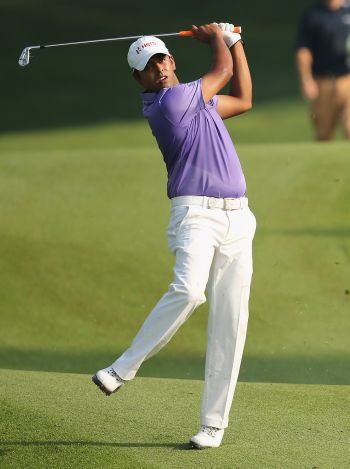 "I'm happy that I've found my rhythm. I'm playing well and hitting the ball good. It's my first week back with my short putter and that's a very big positive for me," said Lahiri.

"I've been coming here for the last five years and I'm starting to feel very comfortable here. I've learnt how to navigate this tough course," added the Indian.

Despite the overwhelming support for home favourites at the Santiburi Samui Country Club, the 28-year-old Bangladeshi stamped his authority by taking a slender one-shot lead over Thailand's Prayad Marksaeng with his three-day total of 11-under-par 202.

Prayad was left to rue a costly triple-bogey seven on the 14th hole as that cost him the lead and slipped him to second place on 203.

Arnond Vongvanij of Thailand signed for a 68 to take the third place while Lahiri stayed on course taking the fourth place with a 67.

After finishing tied second at the Queen's Cup last year, Siddikur is determined to better that result and he meant business by opening his round strongly with two birdies in his first three holes.

He dropped two shots on hole six and seven but bounced back a birdie on the ninth.

The Bangladeshi bogeyed the 10th but responded quickly again with another birdie on the 11th. Three birdies in his closing four holes then lifted him to pole position on the leaderboard.

"I've been playing well on this course but just didn't finish it off well. I came in second last year and I'm looking for that win tomorrow," said Siddikur.

"I've been playing for a long time and I don't feel any pressure. I'm feeling very comfortable about my game and I'm just looking forward to the final 18 holes," added Siddikur, who holds the honour of being the first Bangladeshi to win on the Asian Tour when he earned his career breakthrough in Brunei in 2010.

Meanwhile Prayad, a six-time Asian Tour winner, knows he had to produce a more consistent performance on the final day if he wants to tame the beast of Santiburi Samui Country Club.

The 47-year-old came close to winning with three top-three finishes.