News
Business
Movies
Sports
Cricket
Get Ahead
Money Tips
Shopping
Sign in  |  Create a Rediffmail account
Rediff.com  » Sports » 'It's officially a bromance' between Djokovic and Kyrgios

'It's officially a bromance' between Djokovic and Kyrgios

'This is a start of a wonderful relationship between us off the court as well.'

'Let's start with dinner and drinks and let's see.' IMAGE: Nick Kyrgios, who lit up his first Grand Slam final with his unique blend of unique shot-making and verbal diarrhoea, described Novak Djokovic as a 'God' after succumbing in an absorbing three-hour final. Photograph: Clive Brunskill/Getty Images

Novak Djokovic said he would make good on his deal to buy Nick Kyrgios drinks and dinner after beating the Australian to claim a fourth successive Wimbledon title on Sunday.

The 27-year-old Kyrgios, who lit up his first Grand Slam final with his unique blend of unique shot-making and verbal diarrhoea, described Djokovic as a God after succumbing in an absorbing three-hour contest.

In the build-up to the final the players, who previously had a frosty relationship, were all peace and harmony with a deal being made for the winner to buy dinner, although Kyrgios had suggested they "go nuts in a club".

"I don't know if we're going to make it happen tonight or some other night," a beaming Djokovic, who now owns seven Wimbledon and 21 Grand Slam titles, said on court after his trademark celebration of eating some blades of grass. IMAGE: Novak Djokovic revealed it was his wedding anniversary so Nick Kyrgios may have to wait a little longer for the duo's night out. Photograph: Clive Brunskill/Getty Images

"This is a start of a wonderful relationship between us off the court as well. I didn't respond to the (nightclub invitation) as my wife was sitting next to me. Let's start with dinner and drinks and let's see."

Djokovic, with wife Jelena and young daughter Tara in the box, then revealed it was his wedding anniversary so Kyrgios may have to wait a little longer for his night out.

Kyrgios pushed Djokovic hard but could not prevent the 35-year-old Serb taking his first Grand Slam title for a year -- a crucial dropped service game late in the third set proving costly in the end for the world number 40.

"Congrats to you and your team for an amazing tournament, I wish you all the best man I really really respect you a lot," Djokovic said. "I think you are a phenomenal tennis player and athlete and amazing talent.

"You've been hearing all of that for many years but now you know everything is starting to come together for you. I'm sure we're gonna see much of you in the later stages of Grand Slams.

"I never thought I'm going to say so many nice things about you considering the relationship. It's officially a bromance."

Kyrgios, who fell short of becoming the first Australian man to win a Grand Slam for 20 years, said he did not know whether he would be back in a Wimbledon final, saying all he wanted to do was have a vacation.

"He's a bit of God, I'm not gonna lie," Kyrgios said. "I thought I played well. It's been an amazing couple of weeks for me personally. Really happy with this result, probably the best of my career and hopefully maybe one day I'll be here again, but I don't know about that." 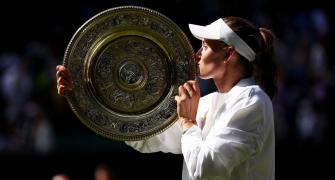 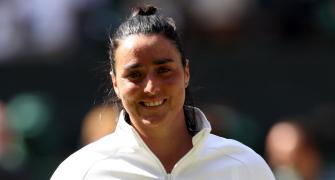 No fairytale ending for Jabeur at Wimbledon 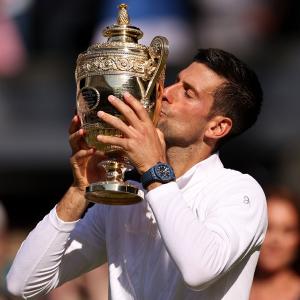 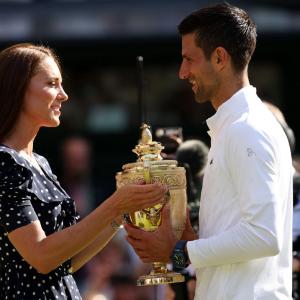