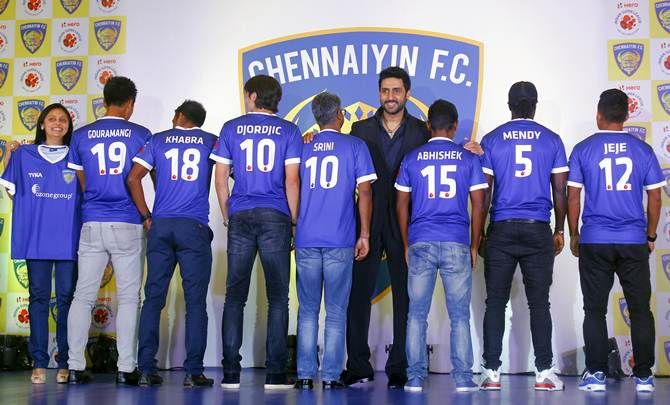 "It’s an important day for us as we unveil the jersey of Chennaiyin FC. The boys have been training very hard and as owners we plan to give them all the moral support possible. We hope the quality and standard of Indian football is something the international arena wakes up to," said Bachchan after unveiling the jersey.

Mrs Dani expressed delighted, saying, "We are excited to have Ozone Group as the principal sponsor for Chennaiyin FC and welcome them on board. We look forward to working with them in the Hero Indian Super League. The decision was made easy as there are definite synergies in our vision for Chennaiyin FC. This association symbolises a shared dream of creating a successful brand and world class franchise.”

Ozone Group CEO Srini Gopalan said, “It is due to the love and passion for the game, Ozone Group decided to be a part of ISL and Chennaiyin FC. The Group promotes football at a grass-root level with Ozone Football Academy. At the club, we provide people with the opportunity to pursue football as a career.

“Chennai is very close to our heart, as Ozone Group has a beautiful development, the Metrozone in the city. We have received an encouraging response from the Chennaites and now it is our time to pay our gratitude by supporting this initiative in the city. We are very excited to be associated with Chennaiyin & ISL, which is poised to become a successful sporting event in the country - especially for the millions of football fans that we have across India.”

Chennaiyin FC starts their Hero Indian Super League campaign with an away game against FC Goa on October 15 while their first home fixture is against Kerala Blasters on October 21. 'The plight of millions of children suffering has been heard'