Chennaiyin FC produced a clinical performance and pumped in goals in the second half to thrash Mumbai City FC 3-0 to consolidate their position at the top of the table in Indian Super League at the DY Patil Stadium.

After much prodding and probing, Bruno Pelissari gave his side the lead in the 71st minute when he slotted the ball home.

Pelissari made the stride after a blunder from Mumbai midfielder Jan Stohanzl, who gave away the ball from the edge of the box before Chennai's Balwant Singh failed to get a touch.

The Marco Materazzi-coached side extended the lead 10 minutes later when Dhanachandra Singh's shot found the back of the net after capitalising on a error from Mumbai custodian Subrata Paul.

The Abhishek Bachchan and Mahendra Singh Dhoni co-owned side took an unsailable 3-0 lead in the 89th minute when Cristian Hidalgo, who came in for Pelissari in the 73rd minute, smashed a brilliant freekick past to the right of a flying Paul in the Mumbai goal.

The table-toppers missed out on getting a penalty when Mikael Silvestre's shot hit Manuel Friedrich's hand in the 56th minute. 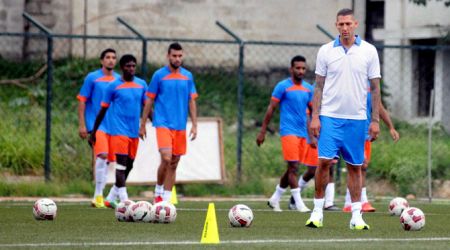 Chennai which had drubbed Mumbai 5-1 when the two sides had met earlier, consolidate their position at the top with 19 points from 10 games, while with 12 points Mumbai is placed sixth in the eight-team league.

The hosts were without the services of the French import Nicolas Anelka and drafted Portuguese midfielder Tiago Ribeiro in his place, while skipper Syed Rahim Nabi came in place of forward Subash Singham in the starting eleven.

Chennaiyin, on the other hand, made three changes to their line-up from the previous game.  The league's highest goal scorer Elano Blumer, Colombian striker John Mendoza and Gourmangi Singh were replaced by Bruno Pelissari, Mikael Silvestre and Balwant Singh.

Mumbai came close to breaking the deadlock in the fifth minute when Czech midfielder Jan Stohanzl arrived late to collect the cross from Tiago but his shot went wide.

The home side squandered a double opportunity in the 26th minute. Lalrindika Ralte stole the ball from Bernard Mendy and passed it to Brazilian striker Andre Moritz, whose shot was denied by custodian Gennaro Bracigliano. The ball then went to Tiago after former Manchester United defender Silvestre deflected it but his shot went wide.

The visitors targeted Moritz, who was on the receiving end of many tackles, and the tournament's first hat-trick scorer had to leave the field on the 31st minute with a hamstring injury.

This however, gave the opportunity to marquee player Frederik Ljungberg to ply his trade after missing a few games due to a hamstring injury.

The former Arsenal star last featured in the 0-2 loss at home against NorthEast United FC on October 24, got a rousing welcome from the packed stadium.

In a fast-paced opening half, Mumbai dominated the start of play but couldn't capitalise on the chances.

The Chennai side couldn't get past the Mumbai's defence and were unable to break the shackles in the first half, despite enjoying a lions' share of possession.

Pelissari's feeble attempt from a distance in the 34th minute was easily blocked by Mumbai goalkeeper Subrata Paul.

The Indian custodian was tested in the first couple of minutes in the second half by Pelissari but the Brazilian couldn't manage to find his name on the score sheet then.

Mumbai frittered away a chance when skipper Nabi missed a golden opportunity to give his side a lead in the 53rd minute.

The hosts, who had featured in three successive goalless draws prior to this match, had a chance to go up when Denson Devadas fouled Stohanzl in the 65th minute but Tiago's freekick failed to trouble the visiting team keeper. 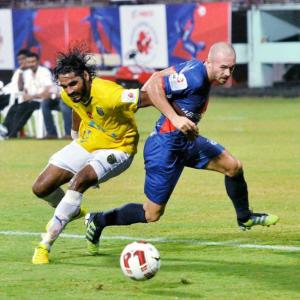