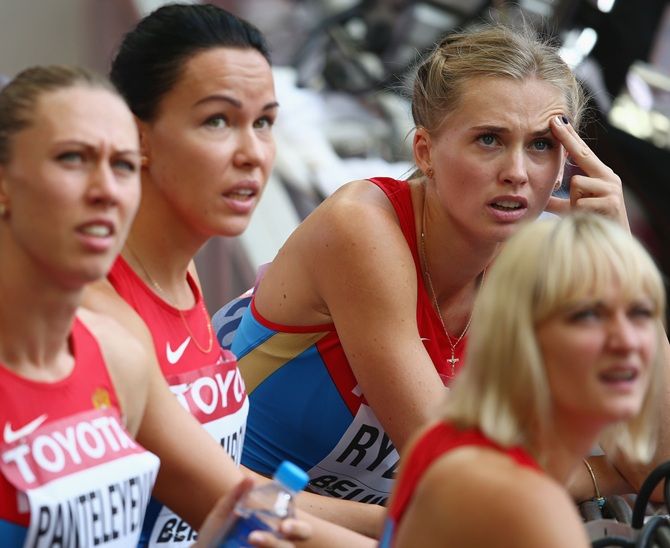 IMAGE:  Russian track and field athletes have appealed against their ban to the Court of Arbitration for Sport . Photograph: Michael Steele/Getty Images.

With the Rio Olympics less than three weeks away, the IOC on Monday promised "the toughest sanctions available" after a report found Moscow had concealed hundreds of positive doping tests in many sports ahead of the Sochi winter Games.

The International Olympic Committee (IOC) did not spell out whether it would heed growing calls for Olympic bans already imposed on Russia's track and field athletes and weightlifters to be extended to all its competitors in Rio.

However, IOC President Thomas Bach said the independent World Anti-Doping Agency (WADA) investigation had revealed "a shocking and unprecedented attack on the integrity of sport and on the Olympic Games.

The IOC Executive Board is to hold a telephone conference on Tuesday to take its first decisions, which may include provisional measures and sanctions with regard to the Rio Olympics.

"Therefore, the IOC will not hesitate to take the toughest sanctions available against any individual or organisation implicated."

WADA itself explicitly urged the IOC to consider banning Russia from the Rio Olympics altogether.

Russian President Vladimir Putin, who staked his reputation on the Sochi Games, the costliest in history, said the WADA-backed report was the result of political interference and that the Olympic movement could now split.

The report confirmed allegations made by Grigory Rodchenkov, former head of the Moscow Anti-Doping Laboratory.

He told the New York Times two months ago that dozens of Russians had used performance-enhancing drugs in Sochi with the support not only of national sports authorities but even the domestic intelligence service, the FSB.

Monday's report said Russia, a traditional sporting superpower, had been stung into action by its performance at the 2010 Vancouver Winter Olympics, where it finished 11th, with only three gold medals.

"The surprise result of the Sochi investigation was the revelation of the extent of State oversight and directed control of the Moscow Laboratory in processing and covering up urine samples of Russian athletes from virtually all sports before and after the Sochi Games," said the report, unveiled in Toronto.

The investigation was led by Canadian sports lawyer Richard McLaren, who sat on the independent commission that last year exposed doping and corruption in Russian track and field, leading to its exclusion from international competition.

The report said Deputy Sports Minister Yuri Nagornykh had been advised of every positive test across all sports from 2011 onwards and decided "who would benefit from a cover up and who would not be protected.

"The State implemented a simple failsafe strategy," it said. "If all the operational precautions to promote and permit doping by Russian athletes proved to have been ineffective for whatever reason, the laboratory provided a failsafe mechanism.

"The State had the ability to transform a positive analytical result into a negative one by ordering that the analytical process of the Moscow Laboratory be altered."

Among the hundreds of samples that disappeared were 35 from Paralympic athletes.

In Sochi itself, where international observers were scrutinising the drug tests, positive results could not simply be brushed away, so the FSB developed a method of opening urine bottles to allow samples to be swapped undetected.

Rodchenkov spoke of a clandestine night-time operation in which staff secretly took samples from the lab via a "mouse hole" cut into a wall, and replaced them with clean samples taken from the same athlete months earlier and sometimes manipulated.

McLaren said Rodchenkov and all other witnesses interviewed had been deemed credible, and the report said the investigators "confirm the general veracity of the published information concerning the sample swapping that went on at the Sochi Laboratory during the Sochi Games".

The investigations showed that caps had been removed from a number of samples, and that they contained unusually high levels of salt, "significantly exceeding the levels produced by the human body".

Nagornykh and Sports Minister Vitaly Mutko, who was mentioned 21 times in McLaren's 97-page report, were not immediately available for comment.

Putin said in a statement that there was "no place for doping in sport", and that the officials named in the report would be suspended.

Putin also said the allegations were based on the testimony of only one man, and were an attempt to "make sport an instrument of geopolitical pressure, to form a negative image of countries and peoples".

Harking back to the tit-for-tat superpower boycotts of the 1980s, he said: "The Olympic movement ... may again be on the verge of a split."

In a leaked draft letter intended to be sent to the IOC on Monday, US Anti-Doping Agency (USADA) CEO Travis Tygart called for a ban on all Russian athletes, not only in track and field.

Paul Melia, head of the Canadian Centre for Ethics in Sports, said the letter was backed by various athletes' committees and the anti-doping organisations of the United States, Germany, Japan and New Zealand, among others.

However, Russian track and field athletes have appealed against their ban to the Court of Arbitration for Sport, which is due to rule by Thursday.

If it finds in their favour, there would seem to be little chance of a wider ban on Russian competitors holding up.

Bach had indicated last week that he was reluctant to see athletes from one sport punished for the crimes of athletes or officials from another.

© Copyright 2020 Reuters Limited. All rights reserved. Republication or redistribution of Reuters content, including by framing or similar means, is expressly prohibited without the prior written consent of Reuters. Reuters shall not be liable for any errors or delays in the content, or for any actions taken in reliance thereon.
Related News: IOC Executive Board, International Olympic Committee, Sochi Laboratory, WADA, Russian
SHARE THIS STORYCOMMENT
Print this article 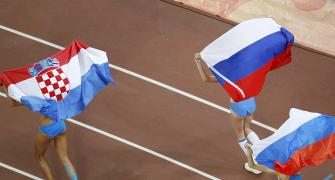 Will Russia be banned from Rio Olympics? 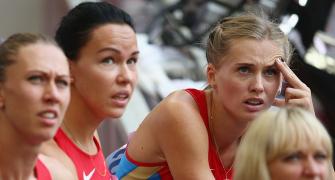 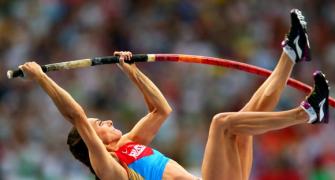 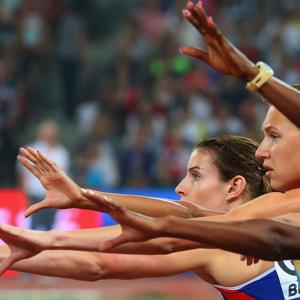 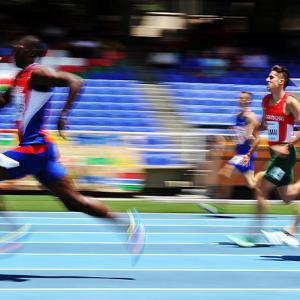 IAAF turns down 67 Russian applications to compete as individuals