'Anju can jump more than 7 metres'

Mike Powell is the current world record holder in the men's long jump and also a technical adviser to India's very own long jumping ace, Anju Bobby George. The American, who had surpassed Bob Beamon's 23-year-old record at the Tokyo World Championships in 1991, feels Anju has the ability to jump over seven meters and garner a medal at the coming Olympics. The lanky athlete, who now coaches the Cal State Fullerton University is in India to participate in the 'Dream Run' of the Mumbai marathon, spoke to Ashish Magotra. Excerpts.

Has Anju's performance improved since her World Championships bronze?

I have not seen Anju since the World Championships, but am hoping she will be coming to the US soon. She spent a lot of time on the road last year and it is up to them [Anju and her husband-coach Bobby] to decide when they want to return for the training. Training in the US and competing in Europe can get very strenuous.

There have been rumours that Anju might decide against training with you, precisely because of the tiring schedule. How do you see that affecting her?

Anju is a very talented athlete. It is a given fact that she will do well, with or without me. There were a lot of things that I wanted to change before the Olympics in Athens. The goal was for her to get back to the US as soon as possible. We need to work out a schedule, but that will only be possible only when she comes back. Just because I am the world record holder does not mean I am a great coach. She will continue to do well. 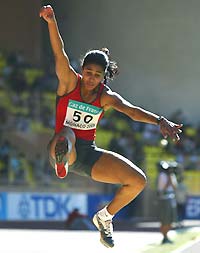 So, what according to you is Anju's true potential?

She can definitely jump more than seven meters. Yes she has that ability for sure. Last season, she mainly improved her consistency, confidence and competitiveness. She was sure of herself when she was on the field.

The world of athletics has been rocked by the designer drugs scandal. Your thoughts

It is a very unfortunate turn of events and has robbed the sport of its sheen. But it's good for the sport. The audience knows that we are trying to do something about the problem. In every wake of life there will always be people who try and cheat. There is a lot of money in the sport now and it makes a difference.

When we used to compete, we valued the sport more. There was not a lot of money in the sport when I first started, But by 1991, when I was starting to get good, money was pouring into the sport.

Were you surprised when it was alleged that your arch-rival Carl Lewis took drugs?

Very. I was very surprised. But [grinning] the first thought that came to my mind was whether I could get a medal out of this.

During your chequered career you won two silver medals at the Olympic Games, in 1988 and 1992 respectively. Does missing out on an Olympic gold medal weigh on your mind?

If there is one thing I regret, then it is not winning an Olympic gold. When I first started out as a long jumper, the goal I had in mind was the gold medal. But then when I look back at the time I spent on the track, I tell myself 'I did a pretty good job'.

When you broke Bob Beamon's 23-year-old long jump world record (8.90m) in the 1991 World Championships, Carl Lewis was on an unbeaten streak that stretched back ten years. How did you approach the championships what went through your mind? 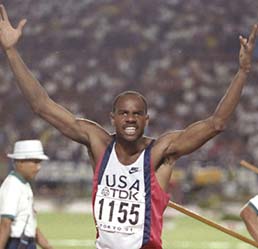 Did you at any point of your career say to yourself, 'This guy is so good, I will probably have to wait till his career is over'?

No I have always been very positive. I take the positive even out of the worst situations. So even when he beat me, I used to be thinking, 'Am I getting closer?' He used to beat me by 30 centimeters, then it came down to 10 cms, then it got to a point where he needed his last jump to beat me. So I just kept thinking 'I am getting closer and closer and closer and one day I am going to get him'. And that's what happened.

You have always talked about being competitive. Even when you talk to Anju it's always about how competitive you have to be. How have you tried to imbibe these qualities in her?

I was always the underdog -- always fighting against the odds. So, regardless of talent or technique or anything, I always felt I could win whether it was the world championships or just a simple game of cards. If I thought there was even the slightest chance to win, I just had to. That's part of my nature.

For Anju, I have just tried to give her the confidence. I guess when you have a world record holder saying, 'I believe in you', that itself instills a lot of confidence. I would tell her the things that she can do and is strong at, and the things she needs to work on. You can say that when you believe in someone. And she knows I believe in her. I know she took that with her when she won the bronze medal. She must have said, 'he knows what he is talking about, so obviously he believes I can win'. I think that helped her a lot.

The experts say Marion Jones does not have a very good technique for the long jump. But her speed to the board makes up for the lack of skill. How does someone like Anju, who does not have the same speed, compensate?

Marion would be the world record holder if she had decent technique. Anju's strength is her jumping and that is a natural thing for her. So that is one thing I did not have to work on. I needed to work with her on her rhythm to the board, her running technique and her mechanics. And, unfortunately, that takes time -- it takes more than a year or a couple of months to get to the bottom of things. My plan for her is improvement of her running technique so that her approach to the board is faster and better. And, therefore, she will be able to jump further and more consistently.

Is speed one of the biggest problems you faced against Carl Lewis (former Olympic gold medallist in the 100m, 200m, long jump and relay)?

I always had speed. I had a great coach. He taught me about the event, my bio-mechanics and all that stuff. It wasn't a problem; it was just something I needed to work on and get better. I worked very hard and eventually managed to beat him. I think one of the problems with him was that he was so good at the other disciplines that he didn't focus on the long jump. While he was focusing on them, I was catching up with him, and by the time he turned around I was past him. But if he had focused on the long jump, the record would probably be 9.20 metres or more.

You have returned to active competition in recent times. What prompted your comeback?

I realized that even though I am older, I still have some talent and I have a few big jumps left in me and I thought it would be fun.