European champions Inter Milan comfortably booked their place in the Club World Cup final with a 3-0 win over Seongnam of South Korea on Wednesday.

Inter will meet surprise packages TP Mazembe of DR Congo on Saturday after the African champions upset Internacional of Brazil 2-0 to become the first team from outside Europe or South America to reach the final.

Midfielder Dejan Stankovic gave Inter a third-minute lead when Samuel Eto'o crossed low from the left and defender Cho Byung-kuk, trying to stop Diego Milito from taking the ball, pushed it into the path of Stankovic who fired into the net.

Captain Javier Zanetti scored a fine second goal just past the half hour, racing into the box and taking a return backheeled pass from Milito to fire home.

The third came from Milito in the 73rd. Eto'o shot from the left, goalkeeper Jung Sung-ryong parried and the Argentina striker controlled with his chest and knocked the ball in as Seongnam called in vain for handball.

The Asian champions will play for third place against Internacional.

Seongnam came closest in the first half when tall Montenegrin striker Dzenan Radoncic's header from Colombian Maurico Molina's free kick was tipped over by Julio Cesar.

The Brazilian went down to a hard free kick from Seongnam's Australian captain Sasa Ognenovski and Radoncic was left with an open goal but shot just wide.

© Copyright 2022 Reuters Limited. All rights reserved. Republication or redistribution of Reuters content, including by framing or similar means, is expressly prohibited without the prior written consent of Reuters. Reuters shall not be liable for any errors or delays in the content, or for any actions taken in reliance thereon.
Related News: Seongnam, Inter Milan, Diego Milito, Dzenan Radoncic, Internacional
COMMENT
Print this article
Atletico too good for Inter Milan in Super Cup
Milito completes Inter Milan move 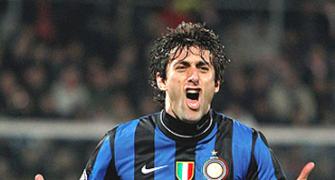