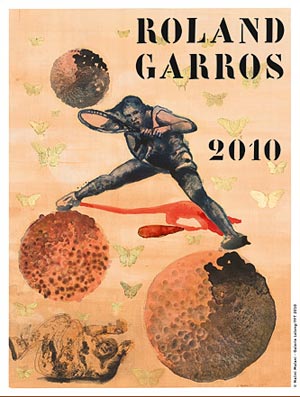 The Indian representation in this year's French Open is not confined to just the Somdev Devvarmans and Leander Paeses alone.

The official poster for French Open 2010 is created by 64-year-old artist Nalini Malani, who earned the distinction of not only becoming the first Indian but also the first Asian to do so.

Ever since official French Open posters began in 1980 to celebrate art and tennis, a host of renowned European painters, like Spanish Catalan painters Joan Miro and Antoni Tapies, Belgian artist Pierre Alechinsky have been commissioned to design the poster for this Grand Slam.

Nalini, a Pakistan-born Mumbai-based artist, in her design, portrays a woman tennis player, stretching across two globes while playing a shot.

The female tennis player on the poster has some golden butterflies flying around her and a woman is lying on the ground looking up in anguish.

Describing her creation, Nalini said she wanted to show the struggle and success of tennis players, especially women.

"The young woman tennis player strides the Universe. She is in a magical space with golden butterflies around her. The falling figure shows that sometimes one wins but sometimes one can lose -- but one has to go on playing the game," Nalini said from Paris.

"It was wonderful to be associated with the French Open. And indeed it was very satisfying to make the artwork for the poster that would be seen all over the world. I am happy to say my work is very much appreciated in Europe."

The butterflies in the posters, according to Nalini, depict the vulnerability of tennis players.

In the pamphlet distributed to the media in Paris after the launch of the poster, Nalini appreciated the achievements and contribution of Sania Mirza in popularising the game in India.

"She is our youngest player trying hard at the game. Her tennis has revolutionised the mentality here. It created a sense of liberation. If it was natural for men in high society to play tennis, it wasn't the case, after a certain age, for young girls," Nalini said.

Asked how she got associated with the French Open, Nalini said her exhibitions at the famous art gallery 'Galerie Lelong' in Paris helped her get noticed.

"The well-respected Galerie Lelong in Paris chooses in collaboration with the organisers of the French Open the artists for making the poster since 30 years. It is the longest relationship between the arts and sports in the world.

"Roland Garros is taking this art connection very serious. Since a few years I have been showing with Galerie Lelong in Paris and last year they approached me if I would accept the invitation to make the poster for 2010."

Since she has the first hand experience of the ordeals of refugees as she lived in refugee camps during India's partition, her art work often condemned cynical nationalism.

Yet, Nalini says sports was not altogether alien and this is not for the first time that she has done something on sports.

"Sports is not my topic but in my works from time to time there do appear sportsmen and sportswomen from various cultural background, such as running and even sumo wrestling," she said.

To publicize the latest poster, the orgainsers sent a film crew to Mumbai to make a documentary. The short version is screened on the internet and the long one can be found in the museum of Roland Garros.

Nalini has a long connection with Paris as she studied fine arts there in the early 1970s on French government scholarship.

Before coming to Paris for the launch of her poster, Nalini received an honorary doctorate from 'San Fransisco Art Institute'.

"Now I am in Paris for this launch of the poster and the opening of an exhibition at the Roland Garros Tennis museum where my works stand central in an overview exhibition of 30 years of posters. Also this week I am giving a lecture at the famous Jeu de Paume Museum in Paris," she added.

French Open could move out of Paris