India rounded off their impressive tour of Canada with a 3-2 victory over the home side in their final game to win the seven-match hockey Test series 6-0, at Tamanawis Park, Surrey, Canada.

Wayne Fernandes flicked home twice for Canada, in the 26th and 46th minutes.

One match in the series was drawn.

The Indians made their intentions clear from the beginning when Sarwanjit Singh tested Canadian goalkeeper David Carter in the opening minute, followed by captain Rajpal Singh's attempt which narrowly missed the mark.

Canada took some time to settle down but soon produced a couple of fine moves to test Indian goalkeeper Adrian D'Souza.

First Philip Wright missed a deflection from Rob Short and then Gabbar Singh's effort went in vain, as D'Souza brought off a splendid save.

India broke the ice in the 21st minute after midfielder Sardar Singh picked up pace. Sardar sent a well-measured pass to Shivendra Singh, who in turn pushed to the waiting Prabhjot atop the striking circle. The first timer from Prabhjot went past Carter to give India the lead.

Canada nearly pulled one back shortly after but Connor Meakin's deflection was saved by D'Souza.

A faulty stick tackle by Bharat Chhikara in the circle led to Canada forcing two successive penalty-corners, which Fernandes sank for the equaliser in the 26th minute.

Canada nearly took the lead but D'Souza again saved a Wright shot as the home team striker got past Indian defenders Dhananjay Mahadik and Sandeep Singh.

But it was India who forged ahead in the 31st minute when Chandi excelled with individual play and tapped the ball into the goal after drawing out Carter.

Canada missed a chance to equalise close to half-time, with David Jameson failing to beat D'Souza with two rebounds.

India earned their first of two penalty-corners after the change of ends but Sandeep shot wide. Chandi had another goal-scoring opportunity but Carter made a glove save.

Canada applied pressure on the shaky Indian defence but found an alert D'Souza rising to the occasion as he blocked another onslaught from a Jameson and Wright combination.

The hosts restored parity in the 46th minute when Fernandes struck again with a flick from Canada's third penalty-corner.

Later, efforts by Shivendra and Sardar - who was adjudged Player of the Series -- did not bear results as Canadian custodian Carter successfully blocked their attempts. 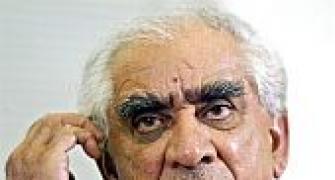 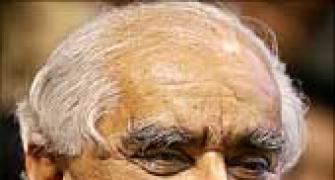 'Jaswant's views on Jinnah are his own, not BJP's'
AFI President Umrao Singh dies