News
Business
Movies
Sports
Cricket
Get Ahead
Money Tips
Shopping
Sign in  |  Create a Rediffmail account
Rediff.com  » Sports » For us there is one league and it is the I-League: FIFA

For us there is one league and it is the I-League: FIFA

Asked about the popularity of the Indian Super League, and whether FIFA will recognize it, secretary-general Jerome Valcke was quick to point out that for the world body there is only one league and that’s the I-League. Manu Shankar reports

It was exactly a year ago that FIFA officials came to India to discuss the growth of the game in the country. Since then its popularity has sky-rocketed, largely due to the Indian Super League and FIFA World Cup.

Secretary-general Jerome Valcke couldn’t have asked for anything more than this. With the Under-17 World Cup due in three years’ time, he is not only happy with the progress in terms of infrastructure, but also confident that India will successfully host the competition and pave the way for bigger competition.

“It’s true a lot of things have happened since our last visit to India and I’m quite happy with the organisational progress regarding the Under-17 World Cup,” said Valcke, during a media interaction in New Delhi on Wednesday.

“It’s not a question of competing with cricket. I believe India is big enough to have a second sport and football is strong enough to be that second sport. So, after the Under-17 World Cup, we will move on for the next phase of 10 years with a new plan to make sure that with the ISL, I-League with the AIFF we reach the goal of promoting the game in the country,” he added. 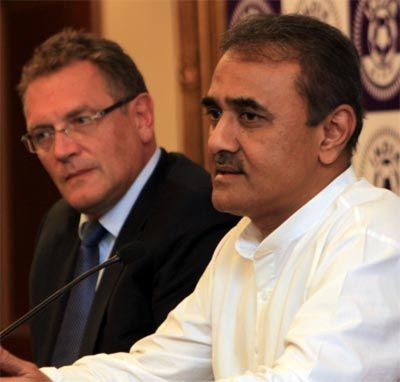 Quizzed about the popularity of the ISL and whether FIFA will recognize the three-month extravaganza as a league, Valcke was quick to point out that for FIFA there is only one league and that’s the I-League.

“We will not call ISL a league. For us there is one league and it is the I-League. ISL is a tournament and helps in the recognition of the sport, because it brings a lot of attention not only in India, but also outside.

“But, then again, you cannot have two leagues in a country -- it doesn’t work. So, for us, there is one league under the aegis of the federation and that’s the I-League,” he added.

Backing Valcke, AIFF president Praful Patel was quick to point out that only the I-League can progress to an AFC tournament and beyond should they make it.

“I-League is the league of India and the recognized league where Indian clubs can then proceed to the next level in Asia and beyond. If tomorrow we host the Club World Cup, only an I-League club can progress into that tournament,” said Patel.

“So let us not confuse the issue at all as to which is the league of India,” he added.

Valcke was confident that if all the cards are played well, India could well host bigger tournaments.

“It is also linked to the quality the Under-17 team has and then it’s important to move into the next project,” Valcke said.

Asked about Nicolas Anelka’s suspension, FIFA said the Frenchman will be eligible to play for Mumbai City FC after completing his three-match ban.

Valcke expressed delight with the turnout for the ISL game in New Delhi on Tuesday night.

“What was nice last night in the game between Delhi Dynamos and FC Pune City was the sound.